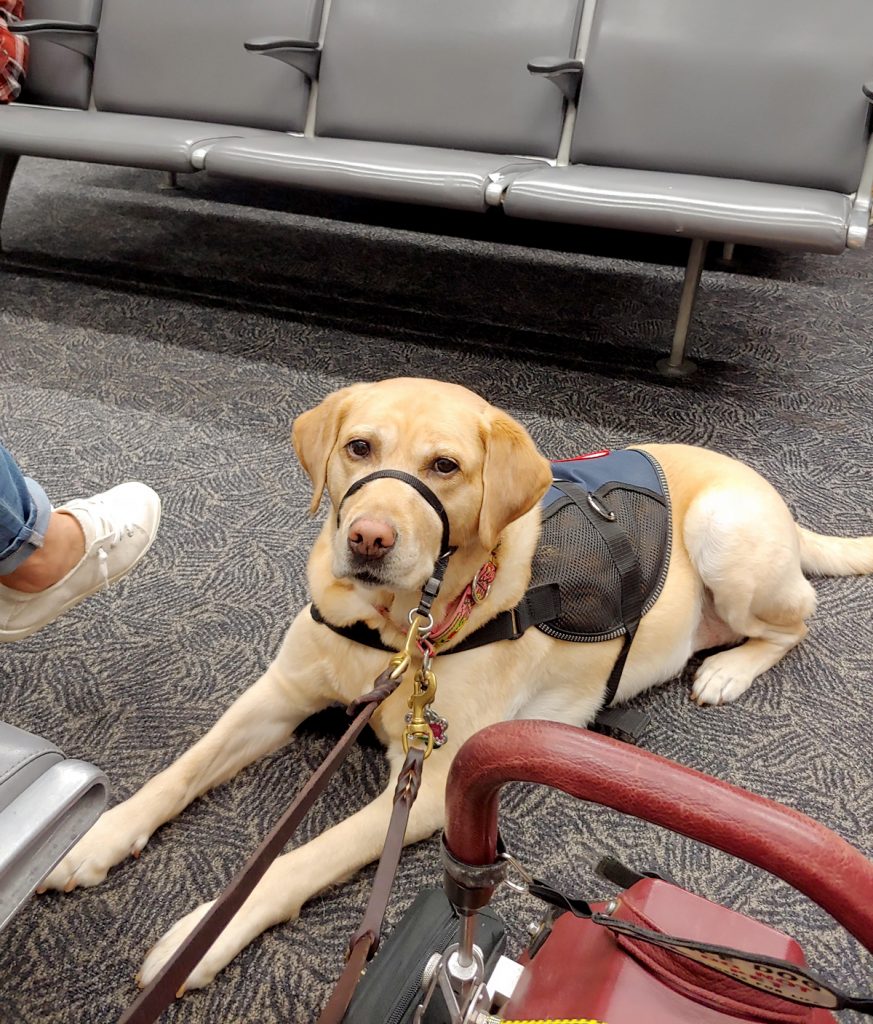 Service dog Saffron waits with his owner to board a departing airplane. A new federal rule changes which animals can board planes as a service animal. (Photo courtesy of Canine Partners for Life)

Have you ever encountered an unusual animal while boarding an airplane and settling into your designated seat? A host of creatures including pigs, donkeys and birds have made headlines as emotional support animals for travelers who claim their critter companions bring them needed comfort.

But a new rule introduced by the U.S. Department of Transportation in December has revised the Air Carrier Access Act, redefining what constitutes a service animal.

The department, which says it received more than 15,000 comments on the notice of proposed rulemaking, stated that the final rule change “addresses concerns raised by individuals with disabilities, airlines, flight attendants, airports, other aviation transportation stakeholders, and other members of the public, regarding service animals on aircraft.”

Under the new rule, a service animal is defined as “a dog, regardless of breed or type, that is individually trained to do work or perform tasks for the benefit of a qualified individual with a disability, including a physical, sensory, psychiatric, intellectual, or other mental disability.”

The rule also allows airlines to require passengers with a disability who are traveling with a service animal to complete and submit an official form developed by the DOT attesting to the animal’s training and good behavior.

“For flight segments of eight hours or more, the rule allows airlines to require passengers to complete and submit a DOT form attesting that the animal has the ability either not to relieve itself on a long flight or to relieve itself in a sanitary manner,” the final rule says.

That means emotional support animals will no longer be considered service animals but rather pets, leaving them without permission to board flights as before.

At least five airlines have since banned ESAs from their flights, including Alaska, American, Delta, JetBlue and United. Southwest Airlines has not made any changes to its ESA policies.

Airlines, flight attendant unions and various disability groups have pushed for the change as more ESAs boarded flights and concern grew that some flyers were abusing a “loophole” in federal law to bring their beloved pets on board for free.

The DOT’s move to narrow the definition is a victory for flight attendants and service animal advocates, who say the change has been a long time in the making. Dozens of service animal organizations and unions signed a letter to the DOT in support of the rule change.

“There are untrained, sometimes wild animals in the cabin, which are allowed on board by these false certifications that are available online, which has caused flight attendants in the past to be at risk,” said Paul Hartshorn Jr., national communications chair for the Association of Professional Flight Attendants.

In Hartshorn’s experience, untrained dogs can get aggressive on planes in cramped quarters.

“They are not trained to be a service animal or to be in a confined space between someone’s feet with two passengers on either side or stuck in a window seat with nowhere to go,” he said.

Janie Cramer, executive director of Canine Partners for Life, said the rule change is a positive step forward for individuals with disabilities. The difference between a service animal and an ESA, Cramer said, is that ESAs don’t normally go through a training process where they are socialized in public and get used to being around other people and dogs.

“Our program is two years of training for our dogs, so when they are 8 weeks old, they go out into public and stores, they go to restaurants and they learn from that time how their behavior is to be,” Cramer said. “… (T)heir behavior is just through learning, ‘This is how I have to behave here, I have to be quiet here.’”

The second year of training includes learning advanced skills such as providing balance and support or alerting their owner to a potential seizure or cardiac concern.

“The dog can alert to them up to 40 minutes ahead to keep them safe. You can see how people would really rely on their service dogs,” she said.

Having untrained pets or fake service animals on flights and in airports has been a challenge for Cramer’s graduates, impacting their safety and ability to do their job.

“If a service dog is attacked or has a bad experience, it can affect their performance. In some situations we have had, the dogs could no longer work,” Cramer said.

Although she approves of the rule change, Cramer said she recognizes the concerns felt by individuals who own ESAs.

A petition started by Florida native Leana Rendon on Change.org has more than 1,000 signatures, with several signers attesting that their ESAs serve as a “lifeline” and that they require ESAs when traveling to help them cope with anxiety, panic attacks and mental illness.

“I understand privileges with ESAs have been abused, but that comes down to improper vetting and could easily be fixed rather than banned,” wrote petition signer Amy Willard. “Traveling with my ESA isn’t just about having a dog to pet during the flight, (it’s) the whole trip and the support they provide the entire time traveling and while being away from home.”

Signer Veronica Hartowicz wrote, “The ban is discriminatory and causing undue stress on patients who are legitimately prescribed an ESA. The flat rate fees for ‘pets’ are prohibitive … This needs to be reversed NOW.”

Animals that previously traveled as emotional support animals must now travel as carry-on pets or as cargo pets on several airlines, as long as they meet the requirements. That may mean owners will have to pay a hefty fee to bring them along.

American, Delta and United charge $125 each way for “carry-on pets.” Alaska Airlines charges $100 each way for pets in the cabin and in baggage. Pets traveling on Southwest Airlines are subject to a nonrefundable $95 “pet fare” each way per pet carrier.

Despite protest of the change, airlines choosing to ban ESAs are standing by their decisions.

“We’re confident this approach will enable us to better serve our customers, particularly those with disabilities who travel with service animals, and better protect our team members at the airport and on the aircraft,” said Jessica Tyler of American Airlines.

“We will continue to review and enhance our policies and procedures as health and safety are core values at Delta,” John Laughter, senior vice president and chief of operations, said in a statement. “These updates support Delta’s commitment to safety and also protect the rights of customers with documented needs — such as veterans with disabilities — to travel with trained service and support animals.”•