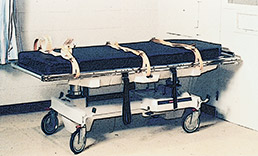 The U.S. Supreme Court on Wednesday denied a last-minute appeal filed by Oklahoma death row inmate Benjamin Cole, paving the way for him to receive a lethal injection Thursday.

Cole, 57, was convicted and sentenced to death for killing his 9-month-old daughter Brianna Cole by forcibly bending the infant backward, breaking her spine. Prosecutors allege Cole was angry at the child for crying while he was playing a video game.

Cole’s attorneys have not disputed that he killed the infant, but they say he is severely mentally ill and has brain damage that has worsened while he has been in prison.

A state panel rejected Cole’s bid for clemency earlier this month, and a district court judge in Oklahoma determined he was competent enough to be executed.

Cole’s execution would be the sixth since Oklahoma resumed carrying out the death penalty in October 2021.