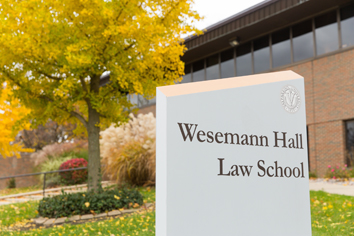 The former law school at Valparaiso University closed at the end of the 2020 academic year. (IL file photo)

After recently shuttering its 140-year-old law school, Valparaiso University is going on the offensive to keep a donor from reclaiming a gift worth more than a million dollars that was made to support the legal education program.

The university filed a counterclaim Wednesday in a lawsuit brought by the Lutheran Legacy Foundation. LLF merged in 2010 with the Clara and Spencer Werner Foundation, which is the charitable organization that originally made the gift to the law school. Asserting it is maintaining the donor’s “intense interest in the wellbeing” of both graduate and undergraduate programs, Valparaiso is arguing under state law it can redirect the law school donation to the undergraduate fund.

Valparaiso is asking the U.S. District Court for the Northern District of Indiana for permission to modify the donation as allowed under Indiana Code section 30-2-12-13(d). State law enables institutions to change the “charitable purpose of a fund” if the change is consistent with the donor’s intention. The university contends shifting the law school donation to the undergraduate coffers is consistent because the foundation made other contributions to support programs and scholarships for the undergraduate students.

However, the foundation is claiming the donation was restricted to the legal education program and now that the university cannot fulfill the charitable purpose of the law school gift, the money should be returned.

In its complaint filed with the federal court in April, the charitable organization is asking for cy pres relief so it can get the law school gift and give it to another Lutheran-affiliated law school or to law students of the Lutheran faith.

“Though various other gifts from Donor to Valparaiso may have been denoted with authorized uses besides a law school or law students, such is not the case with respect to the Law School Fund,” the foundation states in its complaint, Lutheran Legacy Foundation, Inc. v. The Lutheran University Association, Inc. d/b/a/ Valparaiso University, 2:20-cv-00161.

Anticipating the university might petitioning to modify the charitable purpose of the gift, the foundation included a request for a preliminary injunction in its complaint. The foundation wants the injunction to prevent Valparaiso from proceeding under Indiana Code 30-2-12-13 in any court other the Northern Indiana District and for any other relief.

The original gift was $500,000 and was made by the then-Clara and Spencer Werner Foundation, Inc., in 1976 to help fund an addition to Valparaiso Law School’s library. In 1983, the gift was converted into a scholarship fund to provide aid to law students.

As part of the agreement between the donor and the university, 80% of the yearly interest earnings would be allocated to scholarships and 20% would be returned to the gift fund. According to court documents, as of June 30, 2018, the gift had an ending balance of $1.46 million. The law school formally ceased operations at the end of the 2020 academic year.