The Indiana Judicial Nominating Commission and Indiana Commission on Judicial Qualifications are looking for a new attorney
member.

Man entitled to commission, but a reduced amount

Because a former employee wasn’t aware of nor agreed to a plan that would effectively limit his earnings from selling crop insurance, the Indiana Court of Appeals affirmed based on Indiana law that he was entitled to his commission he secured in 2005 even if premiums weren't received until later. The appellate court did, however, reduce the amount of money his former employer owed him due to draws and set-offs.

Retired judge overturned based on bias shown on bench

The Indiana Supreme Court has ordered a new trial for a convicted child molester because of the conduct from the longtime
trial judge, who resigned from the bench in September amid a judicial misconduct investigation.

Fifteen projects in 18 Indiana counties are receiving grants from the Indiana Supreme Court aimed at family court projects,
including Madison and Parke counties that are the newest to join the effort that’s been in place since 1999. 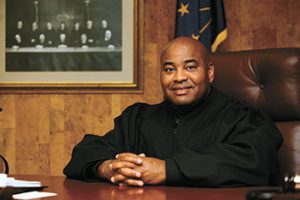 When he was named to the Madison Circuit bench late last year, Judge Rudolph “Rudy” Pyle III made history in that he became not only the county’s first African-American jurist but also the first Indiana Conference for Legal Education Opportunities graduate to be elevated to the state’s judiciary at that level.

Two temporary judges have been selected by the Indiana Supreme Court to fill vacancies in Wayne and Madison counties.

A longtime Madison County judge who’s been repeatedly sanctioned and even suspended in the past is resigning amid a new investigation
into his alleged misconduct during a 2007 murder trial.

In its opinion today regarding a breach of warranty case, the Indiana Court of Appeals had to define for the first time what "regularly located or kept" meant for purposes of Indiana Trial Rule 75(A)(2).

The man who abducted his attorney in July 2008 has been sentenced to 60 years in the Indiana Department of Correction.

A longtime Madison County judge died suddenly Wednesday. Judge David W. Hopper, 60, had served as a jurist for a total of 28 years.

Attorney David A. Happe is the new judge of Madison Superior Court IV.

Even though the Hamilton Superior Court erred in concluding it was the proper venue for a felony child solicitation charge, the error doesn't warrant an acquittal of the conviction, the Indiana Court of Appeals concluded today. The case was remanded for retrial in the proper venue of Madison County.

The Indiana Attorney General filed a suit Monday against former Chesterfield town officials seeking recovery of more than $259,000 in public funds they allegedly defrauded from the town government.