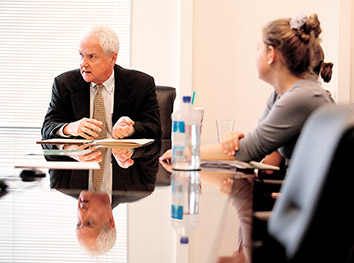 As a way to help judges and parties in paternity court in Marion County, an Indianapolis law firm recently offered conference
rooms and support staff for a day of pro bono mediation in its offices, something firm members say they hope other law firms
will consider if they have the available space.

Brita Horvath and Andrew Campbell, co-chairs of the pro bono section who both work for Baker & Daniels, offered the space
when asked by the ADR committee’s chair Jill Goldenberg of Cohen Garelick & Glazier, and incoming chair Elisabeth
Edwards of Jocham Harden Dimick Jackson in Carmel.

Edwards said they had more than enough offers from volunteer mediators for that day and anticipated future pro bono mediations
would also have good volunteer participation.

Because this was a first-time event, Commissioner Sheryl Lynch assigned 10 mediations for paternity cases based on what she
thought would be likely to settle while screening non-domestic violence cases that would come through paternity court.

Past-ADR committee chair Holly Wanzer, also of Jocham Harden Dimick Jackson, participated in the mediations and said paternity
cases were likely the easiest family law cases to resolve in this type of setting because they had a finite number of issues.

Sessions were scheduled from 8 a.m. to noon and 1 to 5 p.m. Most of the cases settled or concluded in some way.

A handful of the scheduled cases settled prior to the mediation day, but Edwards and Wanzer said that was still a positive
thing in terms of lightening the court’s docket. Both said that knowing there was a court date looming, the parties
probably got more serious about settling.

But even with fewer mediations taking place than scheduled, the mediators who volunteered and helped organize the event said
it was still worthwhile overall.

Wanzer had a case that settled after an hour and a half. She said the parties had attorneys available by phone in case the
parties decided they wanted to talk to them, but in the end they settled without calling attorneys.

“Both were defensive when they came in the door,” she said. “They were here by court order, not by choice.
But once we started talking about issues as they related to their child, it turned out they agreed on more than they thought.
We were able to get past the emotional aspects of ‘I’m mad at you.’ … The big winner in this case
was the child. They were able to set up new arrangements for parenting time that will start this week.”

Another success story from the day was from Judy Tyrrell of Tabbert Hahn Earnest & Weddle. In the case she handled, she
said both parties had attorneys in the room who she said were “very cooperative and helpful.”

She said they started around 8 a.m. and had an agreement by 9 a.m., followed by some tweaking.

“The lawyers were realistic with their clients,” Tyrrell said. “Neither one got everything they wanted,
but they each got more than they thought they would.”

Phyllis Armstrong of The Mediation Group in Indianapolis also ended her mediation with a signed agreement. Her parties took
about three hours to come to agreement, and like Tyrell, both parties had attorneys with them in the room.

“They said they had tried to talk before,” she said, but that it helped to have a mediator to keep them focused
on what really mattered in their case. “They were elated when they learned they’d leave with something they could
sign. It helped them wrap up loose ends.”

But Edwards wasn’t as lucky.

The father in her case never showed up. She said she was disappointed because she told the mother who did show up that this
would be a chance for her opinions to be heard and that the father in the case would have to be civil and respectful in the
mediation setting.

Edwards said she was “99.99 percent sure” the case would have ended with a signed agreement, but she guessed
that because the father didn’t attend, it would only look bad on future appearances for his case.

The mediators also agreed there was a sense of seriousness in the room because there was a judge pro tem on-site to sign
off on mediations and file them with the court. It was also more convenient, they agreed.

“There’s also the possibility the judge won’t sign off on an agreement,” so having one here to explain
why would allow the parties a chance to do whatever they need to do to get the judge’s approval while they’re
still here, she said.

“Ideally this would be an annual event, if not two times a year,” she said. “I’m confident there
are enough cases. When we put a call out to the ADR section for volunteers, we had to turn people away.”

While Marion County does offer a modest means mediation program for family law cases, which has a sliding scale for parties
that can be as low as $10, organizers noted this program was free for the parties.

They also said that by having the space at Baker & Daniels – five conference rooms, plus an extra room with a small
table and a phone if anyone wanted to take a break to meet with or call an attorney, not to mention access to support staff
– was a huge help.

The mediators were also able to invoice the court $100 per hour for their time, as any mediator who offers to work for the
modest means program is able to do, but in this case they donated the funds to the Indianapolis Bar Foundation.