For 11 years, Dale and Connie Sutton’s lives as parents have been about ensuring what they see as justice for their murdered daughter.

They know it won’t bring her back, but the death penalty is what they want to see for Michael Dean Overstreet, convicted and sentenced to die for the rape and murder of 18-year-old Kelly Eckart in September 1997. He’s been on death row for more than a decade but the legal process is far from finished, and they are doing what they can to stay involved. 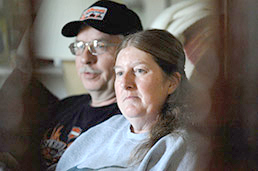 Dale and Connie Sutton sit in their home in Boggstown, discussing the legal process they’ve endured for 11 years in the name of their daughter, Kelly Eckart, who was murdered in 1997. Convicted killer Michael Dean Overstreet is on death row after his conviction in 2000, and his request for habeas corpus relief remains pending in federal court. (IBJ Photo/ Perry Reichanadter)

The voice of those on the victim’s side often fades during the appellate process of a capital case, where the chances of a death sentence reversal became more likely and the proceedings focus more on legal and procedural issues.

Not every victim’s family agrees the death penalty is the most appropriate solution. Local prosecutors and the Indiana attorney general’s office say that decision can create tension among relatives sometimes and tears families apart. Some cases, such as the recent execution of Matthew Eric Wrinkles for the Evansville triple murders of his wife and brother in-law and wife in late 2009, split the victims’ families.

But to the Suttons, it’s not about the legal briefs, the dollar sign, or even the person convicted in 2000, and it’s not a case of justice delayed being justice denied. They know that estimates put the cost of the capital case at $2 million or more.

“It’s about justice,” Dale said. “This is the right sentence for the crime.” Connie adds, “It’s worth every penny.”

They’ve attended every hearing, from start to finish – except the initial arraignment because Connie recalls they didn’t know they could attend it. They plan to continue showing up, though they haven’t officially decided if they’d attend the execution in Michigan City.

The average length of a death penalty case in Indiana is 17 years, based on death penalty appeals in Indiana during the past three decades. The Suttons know they could still be far from the final moment.

“Regardless of how you feel about capital punishment, you know it’s a process that takes time,” he said.

Kelly disappeared and was missing several days in 1997 before her body was discovered in Brown County. It took three years before Overstreet was arrested and tried in Johnson Superior 1. That was Judge Cynthia Emkes’ second murder case – she presided over a five-week trial as a special judge in the Marion County capital case against Eric Holmes.

The Overstreet trial lasted three weeks before a sequestered Clark County jury found him guilty in May 2000 of rape, murder, and criminal confinement. Judge Emkes sentenced him in July of that year, and the Indiana Supreme Court upheld his convictions in February 2003. 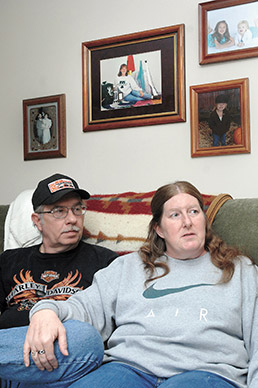 Surrounded by family photos, Dale and Connie Sutton explain why they feel their daughter’s killer should be executed. (IBJ Photo/ Perry Reichanadter)

A year later, Judge Emkes denied Overstreet post-conviction relief and the Indiana Supreme Court upheld that denial in November 2007. There was one dissent – Justice Robert Rucker saw Overstreet’s “mental illness” as grounds to not execute him. The justice wrote that he didn’t see the convicted killer’s mental state as any different than someone who might be considered mentally retarded, and as a result executing him would be unconstitutional.

Both parents say it was difficult listening to what was said during trial and in the other courts by defense attorneys, but they understand it is part of the process and they are pleased that the legal steps are being taken properly to eliminate more questions and issues down the road.

The odds are stacked against death penalty cases overall. About 5 percent of those initially sought result in an execution. So far, Overstreet’s death sentence has been upheld once on post-conviction before Judge Emkes, twice at the state appellate level, and most recently at the federal level. Overstreet’s attorneys filed a habeas petition in 2008, and a ruling came in early March from U.S. Judge Philip Simon in the Northern District of Indiana denying it. The judge has declined to alter his judgment.

The Suttons are now prepared for the 7th Circuit Court of Appeals to review Overstreet’s case before it moves to the clemency phase and then execution.

“This is just a continuation,” Connie said. “I don’t think we are moving any differently than what we expected. It’s a long, hard road, and not one for the weak.”

Both say they have monitored the rulings and kept up on what’s happening in court primarily through the attorneys at the trial level and now from the state. One of the most beneficial resources the couple found was the Johnson County Prosecutor’s Office victim’s advocacy staff that kept in regular contact with them and prepped them for everything that would be happening – from courtroom etiquette, to the evidence that would be presented, to the stages of the proceedings and cumulative timeline. Once Overstreet’s case moved to the appellate level, they kept in touch with Indiana Deputy Attorney General James Martin, who has continued to explain the process.

Before all of this began, Connie said they didn’t know much about the law and didn’t dwell on the death penalty. But she’s become fascinated with the process, and while they do not read all of the briefs or pleadings in the case, she said it feels as though she can at least understand what is being written.

The Suttons don’t know whether they’ll actually attend Overstreet’s execution if and when it gets to that point, but they appreciate having the chance to make that choice. That’s not always been the case.

Eckart’s death left an imprint on Indiana courtrooms. The Suttons helped change the rules on being present at execution as well as being able to offer the victim’s family the opportunity to speak at sentencing. In 2002, the Suttons fought for the passage of “Kelly’s Law” that gives victim’s family members the option to offer an impact statement at sentencing hearings. Connie received an honorary degree from Franklin College where Kelly was a freshman, as a result of her work to change the law.

That same type of victim voice doesn’t exist at the appellate level, and the Suttons say they’d like to see that change.

“There comes a time in the legal process where victims’ voices are silenced,” he said. “We’d like to tell our story before a judge, before he or she puts a dollar amount on the execution or wipes it away.”

That’s what this is about, the Suttons say: They want to make sure justice is done for those who are still here – those who’ve not had the chance to see their daughter graduate from college or start a family and who must visit her gravesite for her birthday.

“Executing Michael Dean Overstreet won’t bring Kelly back, we know that,” Dale said. “But he won’t ever be able to hurt anyone else. The Constitution talks about the rights of the accused more than a dozen times, but victim’s rights are mentioned zero times. You can talk about dollars and what this lawyer and everyone goes through, but no one knows what it’s like until you walk a mile in these shoes.”•