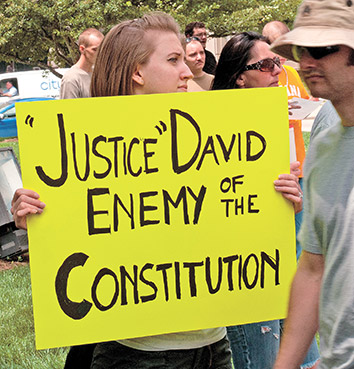 In the history of court controversies, a recent ruling by the Indiana Supreme Court has created public outcry and calls for change in ways that few others do.

But it’s not alone.

The courts have faced a handful of issues through the years pitting judges against public opinion, from a federal ruling on school desegregation in the 1970s to the governor criticizing a ruling that struck down the state’s voter ID law as unconstitutional in 2009. Trial and appellate judges once faced common law liens on their property from people upset about particular decisions, and the judiciary has stood up to attacks from lawmakers and residents who’ve taken issue with a holding that’s seen as “unpopular.”

What’s most rare, though, is the heated response that leads to calls for judges and justices to be removed from the bench, and it’s in those moments where the legal community can test the strengths and find the failings in the Hoosier judiciary.

“Sometimes, these things create their own vortexes of controversy,” Court of Appeals Judge John Baker said, referring to his own experience handling a controversial case in the early 1980s. “That can spin out of control very quickly for a judge or the entire court.”

While still on the Monroe Superior bench in 1982, Judge Baker took on what became known as the “Baby Doe” case involving a Bloomington baby who lived for only five days with Down syndrome and serious internal birth defects that prevented him from eating or drinking normally. The parents decided against surgery, but the hospital wanted court intervention to keep the baby alive – a parental authority issue that had never been addressed anywhere in the country. Judge Baker decided the government shouldn’t interfere with the parents’ choice based on the medical advice, and the hospital counsel failed to convince the Indiana Supreme Court to intervene.

Pro-lifers accused the judiciary of condemning the baby to die, while hundreds of calls came to judicial and state offices. Protests were staged at the Indiana Statehouse rallying for Baby Doe’s right to life. Some called Judge Baker a “baby killer,” and he considered moving his family out of Bloomington because of threats. Others labeled the baby’s death “infanticide” and accused the courts of being part of a conspiracy to further a master race and devalue the sanctity of life.

Opposition faded, but it came back in 1984 when then-Chief Justice Richard Givan faced a retention vote. A Lafayette group launched a statewide campaign with newspaper ads to oust him from the appellate post saying, “Remember Baby Doe, Retire Judge Givan.”

Though his retention number dipped slightly from the norm, the chief justice won that retention vote by a 3-1 margin.

That was the first time public reaction had led to a recall effort under the state’s retention system, but it wouldn’t be the last.

About five years later, a state justice made public accusations about one of his colleagues shortly before a retention election. That cast a cloud on the judiciary and became what some describe as the ugliest chapter in Indiana Supreme Court history. At the time, some in the legal community wondered if the court and system overall could survive the controversy.

Justice Alfred Pivarnik had lost his bid to replace outgoing Chief Justice Givan in 1987, and the Judicial Nominating Commission chose a young Justice Randall T. Shepard for that top post, even though he’d only been on the appellate bench for about 18 months.

Former Chief Justice Givan joined with Justice Pivarnik and raised questions about Chief Justice Shepard leading up to the retention vote, but the legal community supported the new chief justice and many criticized the other two justices for damaging the court’s integrity with the unsubstantiated public claims rather than addressing personality differences internally.

Chief Justice Shepard won retention, and Justice Pivarnik refused to resign despite calls that he do so. The Indiana State Bar Association in late 1988 filed a formal misconduct complaint questioning whether Justice Pivarnik and former Chief Justice Givan’s statements had violated judicial canons, and although it was ultimately dismissed without any action, it revealed a hole in state law on how justices would handle those actions if three of the five had to step aside. The court developed a plan to deal with that rare possibility, and the whole Pivarnik-Shepard controversy motivated lawmakers to change state law and open up the Judicial Nominating Commission interview process that had historically been closed.

Those on the court and in the state’s legal community worried the incident would leave the court unable to function, but instead that situation ushered in a new era of professionalism for the judiciary.

Following the Pivarnik-Shepard issue, the Indiana courts wouldn’t see another anti-retention effort of that caliber until this year.

On May 12, a split Supreme Court issued a ruling in Richard L. Barnes v. State, No. 82S05-1007-CR-343, holding that a person must use the civil court process for redress against unlawful police action instead of trying to resist in any way. Justice Steven David wrote the decision, becoming the focal point for the public outcry that has followed. 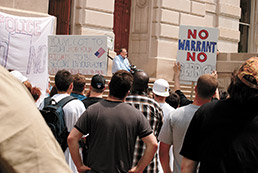 National media attention zeroed in on Indiana criticizing the broad ruling, and in the week following that decision the state police were called to investigate potential threats made to the court by phone and email.

A “Stand Up for your Fourth Amendment Rights” rally drew about 300 people to the front steps of the Indiana Statehouse to protest the decision, and dozens made signs or banners displaying messages such as “Justice David is an Enemy of the Constitution” while others waved American flags and copies of the U.S. Constitution. A political action committee and a Facebook page have been created with the goal of recalling Justice David, who was appointed to the court last fall and will face an initial retention vote in 2012.

What happens next depends on the case and how long the public outcry continues.

Indiana University Maurer School of Law professor Charlie Geyh, a national expert on judicial independence, said the initial reaction could play into the final result, depending on what the court does next.

“Judges make tough decisions and this is a result of them having to make one of those on a tough issue,” he said. “If I was a member of the majority, I’d think long and hard about changing views even slightly because it might look like you’re caving because of the public response. Judicial independence could take a shot in the face even if it didn’t factor in, but it looks like it did. That puts this whole notion of rehearing in a more precarious position.”•