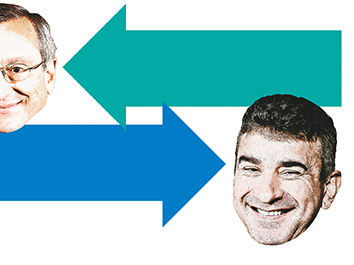 Welcoming a new justice was undeniably the most notable moment for the Indiana Supreme Court in 2010. That lineup change captured the headlines, but it’s not the only item of interest for Indiana court-watchers.

Activity before and after the retirement of Justice Theodore Boehm and the addition of Justice Steven David in the fall of 2010 provides context for how that personnel change has impacted the court, and it offers a crystal ball of sorts for lawyers to use when deciding how to advise their clients.

Indianapolis attorneys P. Jason Stephenson and Mark Crandley, along with associates Jeanine Kerridge and Jeff Peabody, all of Barnes & Thornburg, have finished their latest annual review of the state Supreme Court’s activity. The review is published each summer in the Indiana Law Review, and this is the 20th time the report’s been compiled since Indianapolis attorney Kevin Betz started it back in 1991.

What makes this year’s review stand out the most is that it reaches back more than a decade to the last time Indiana experienced a change in justices. But the shift in the court is only part of the story, according to one of the review’s main authors.

Already this year, Justice David’s impact has been pivotal in reshaping alignments between the other justices and his presence is casting a new tone for the court. His voice is even recasting some of the final decisions made by Justice Boehm before his departure.

“That transition is certainly significant, you can’t overlook it,” Stephenson said. “When writing a transfer petition or arguing at the court, you’ll want to consider

his views to the extent that you can because his opinion clearly matters as the review shows. But it’s one piece of a more interesting puzzle that had some surprises last year.”

This year’s review shows the justices handed down 108 opinions in 2010, an increase from the past two years and the first time since 2006 that the court topped 100. Stephenson speculated that Justice Boehm’s departure in September and Justice David’s arrival in October might have motivated the justices to focus more on pending cases and issues, but that’s not something he can determine from the data.

A multi-year trend continued with a drop in the number of transfer requests – 190 less than the year before and the third straight decrease.

“There is no obvious explanation for this trend,” the review states. “One factor might be that the bar has become more educated about the chances that transfer will be granted and lawyers have therefore become more selective.”

The court granted only 11.1 percent of requests, nearly two-thirds being civil cases. The number of reversals dropped again as the justices reversed in only 63.5 percent of the cases it accepted.

All together, Stephenson says the trend is clear: You’re still likely to have a lower decision reversed if the court accepts an appeal, but it’s not as certain as it once was.

“It’s interesting to me to see the court is accepting more and affirming more, and it seems like the court is more often putting its stamp on an issue,” he said.

One of the most-watched aspects of the annual review is how the justices vote on cases and how often they agree. In past years, disagreement has grown between the five jurists, and Justice Robert Rucker stood out – last year’s review designated him as “The Great Dissenter” because of the continued trend in his dissents.

But 2010 saw a change in agreement and alignment.

“I was intrigued to see the agreement and it’s a fairly significant change,” Stephenson said. “It’s dangerous to ascribe that to any one factor, such as the types of issues, and it’s hard to say if that’s a trend or just a one-year event. We’ll have to watch that, particularly with Justice David a part of the court.”

The most noteworthy development is that Justice Rucker bucked the trend and agreed with the other justices (excluding Justice David) in an average 84 percent of all cases. He agreed with Justice Frank Sullivan 89.4 percent of the time, opposite from the year before when the two were the least aligned of any two justices. Three different pairs of justices were aligned more than 90 percent of the time on criminal cases – something that hasn’t happened in recent years. In 2009, the least aligned justices were Justices Sullivan and Brent Dickson at 78.1 percent.

After taking the bench, Justice David participated in 16 cases before the end of the calendar year and demonstrated what the review describes as “an early hint of how crucial the new justice’s views might be going forward.” Most notably, he was in the majority on all three split decisions covering the insanity defense, the Indiana High School Athletic Association transfer rule, and double jeopardy issues. No other justice was in the majority for all three. He disagreed with other justices more on criminal cases than civil, the review shows.

In the 1990s, when the court experienced more frequent personnel changes, a common trend could be found for new members – they often sided with the chief justice. That trend continued with Justice David. He agreed with Chief Justice Randall Shepard on all nine civil cases the court considered from the time Justice David joined the court in October to the end of 2010 and in 94 percent of all cases he considered.

Stephenson said the chief justice has proven an effective leader who is able to pull the other justices together, particularly since he’s been somewhat of a moderate voice on the court who doesn’t express as many clear points of view as do Justices Rucker or Dickson.

With the lineup change happening so late in the year, Stephenson admits that much of the full story comes after the review period. A clear example of how Justice David’s vote has changed an outcome is in the case of David Hopper v. State, the final decision Justice Boehm wrote days before leaving the court. The decision was 3-2, with Chief Justice Shepard and Dickson dissenting from the majority that ordered a new requirement for pro se defendants but offering little guidance for trial courts. Earlier this year the court agreed to rehear that decision, and if Justice David continues sticking with the majority, the case may have a different outcome.

“He doesn’t appear timid for taking responsibility on opinions on controversial issues,” Stephenson said. “It’s fascinating to see David start out of the gate so strongly, and shows his experience as a trial judge giving him that foundation. We’ll see if that continues or tapers off some the longer he’s on the court.”

As Justice Boehm was viewed as a moderate voice on the court, Stephenson said it will be fascinating to watch to see if the chief justice becomes that same kind of moderate presence or if the absence of that middle ground leads to more disagreement.•