Home » SCOTUS decision on seed use may affect farming practices 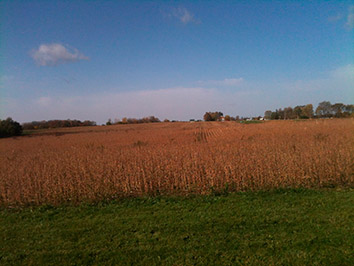 The lawsuit rising from Knox County and landing before the U.S. Supreme Court echoes the Biblical story of David versus Goliath with a 74-year-old soybean farmer pitted against a multinational corporation. Adding to the drama are the attorneys who say not only could this ruling have profound implications, but that this is the wrong case for the court to use to decide the key issues at stake.

Arguments have not been scheduled in Vernon Hugh Bowman v. Monsanto Company and Monsanto Technology LLC, 11-769, but the case is being closely watched by the legal community. At issue is whether the doctrine of patent exhaustion applies to patented seeds after the authorized sale and should an exemption to the doctrine be made for self-replicating technologies.

Vernon Bowman purchased Roundup Ready soybean seeds from a licensed seller and planted them for his first crop of the season. For a second crop planted later in the season, Bowman used seeds he bought from the grain elevator along with some he had saved from the second crop the prior year.

Monsanto claims the second crop violates the licensing agreement Bowman signed when he purchased seeds for the first crop, prohibiting him from saving the seeds. Also, his actions violated two of its patents because the saved seeds contained the same genetically engineered trait as the first-generation seeds.

Mark Janis, director of the Center for Intellectual Property Research at the Indiana University Maurer School of Law, explained the Bowman case by using a copyrighted book as an example.

Buying then reselling a book does not violate its copyright but making five copies and selling those does, he said. In the Bowman case, the patent owner, Monsanto, allowed for the authorized sale of the seeds, limiting the farmers to use them in planting one crop and selling any progeny to the grain elevator. The Knox County farmer saved the seeds, and that raises the question if he infringed on the patent.

“Is saving seeds like copying a book?” Janis asked. “Is that making a new patented item? I think it is. I think it is inappropriate to say the rights have been exhausted.”

Paige Tomaselli, staff attorney at the Center for Food Safety, disagreed. She countered saving seeds is a traditional farming practice. Also, the seeds Bowman saved were legally purchased at a grain elevator and not labeled as patent protected.

Soybeans are one of the backbones of Indiana’s agricultural output with 238 million bushels harvested in 2011, and Monsanto’s Roundup Ready seeds are extremely popular. The seeds have been genetically engineered to resist glyphosate-based herbicide, enabling farmers to spray for weeds and not worry about harming the beans.

Even so, some farmers hold a negative view of the company because of its aggressive tactics in enforcing its patents. In a 2010 report, the Center for Food Safety estimated that as of Jan. 13, 2010, Monsanto had filed 136 lawsuits against farmers for alleged violations of the licensing agreements and patents.

Monsanto sued Bowman in October 2007, alleging the farmer infringed on two of its patents. The U.S. District Court for the Southern District of Indiana granted a summary judgment in favor of Monsanto and awarded the company $84,456.20.

Bowman appealed, and the Federal Circuit Court of Appeals affirmed the lower court’s ruling. On Oct. 5, the Supreme Court granted Bowman’s petition to review the ruling.

In a statement, Monsanto pointed out the Federal Circuit affirmed the District Court’s ruling and, after examining the case, the solicitor general concluded that a certiorari review was not warranted.

“While the Supreme Court has nonetheless elected to review the case, we remain confident in our legal position, and will ask the Supreme Court to affirm the Federal Circuit’s decision,” Monsanto stated. “The doctrine of patent exhaustion for self-replicating technologies, in this case seeds, is of significance to the entire agricultural biotechnology industry.”

Bowman’s attorneys did not return a phone call seeking comment.

Todd Janzen, partner at Plews Shadley Racher & Braun LLP, echoed the question voiced by many in the legal community as to why the high court agreed to hear this case.

“I’m somewhat surprised,” he said. “They don’t typically undertake a lot of agriculture-focused cases. This is going to be fun to watch.”

In his petition for writ of certiorari, Bowman argued under the Supreme Court’s ruling in Quanta Computer, Inc. v. LG Electronics, Inc. 553 U.S. 617 (2008), that the patents in his cases were exhausted when the seeds were sold to the grain elevator.

Janis theorized that the high court watched what the Federal Circuit has been doing in the wake of the Quanta decision and took the case to make sure the lower court is following the Supreme Court’s decisions.

“I fear that in its zeal to uphold the ruling that it made in Quanta, the court may feel it needed to grant the cert in a patent exhaustion case like this one,” he said.

Both Janis and Jay Sanders, partner at Faegre Baker Daniels LLP, said the decision to add a seed saving exemption to the patent statute is one Congress should make, not the courts. That exemption is already written into the Plant Variety Protection Act, and including it in the patent law could upset the balance between the two provisions.

“The truth of the matter is this case is going forward,” she said, “and it does present a unique issue in regards to seeds and patent law.”

If Bowman prevails in the U.S. Supreme Court, that could have a major impact on the doctrine of patent exhaustion.

In fact, Sanders said he could not image Bowman winning. Such a ruling could remove the incentive for companies to make the investment required to develop new products.

A Bowman victory would, in effect, mean a farmer could buy one seed and then use it forever without infringing on the patent, Sanders said.

Conversely, Tomaselli sees a significant benefit for farmers if the justices find for Bowman. “Farmers could regain their traditional rights to save seeds” which would help temper increases in seed prices.

If farmers are prohibited from saving seeds, the seed industry would be free to charge enormous prices for their products, she said.

A finding for Monsanto, Tomaselli continued, would “seem to perpetuate a lot of problems with patenting genetically engineered seeds.” In addition, she said, it would perpetuate the atmosphere of investigations and harassment of farmers that Monsanto engages in to protect its patent rights.

Limiting the ruling to the facts of the case would bring a Monsanto victory, Sanders said. As to the broader implications, such a ruling would affirm that genes are patentable subject matter and every generation of a crop is protected by that patent if the seeds have the patented gene in it.

Janzen pointed out predicting what the Supreme Court will do is difficult and, in this matter, it could remand the case back to the lower court for further proceedings. However, if Monsanto prevails, Janzen offered a view that echoed Sanders but acknowledged Tomaselli’s concerns about the company’s aggressive tactics.

“If the court finds for Monsanto,” he said, “then I think that would show they have a very strong patented technology that farmers should be weary of trying to infringe upon.”•