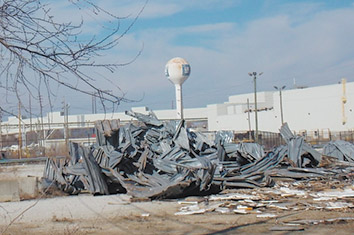 As leaders’ support tentatively coalesced around a preferred site for a new Marion County Jail and Criminal Justice Complex just west of downtown Indianapolis, they got an earful from neighbors opposed to the plan.

Indianapolis Mayor Greg Ballard announced March 13 that the former General Motors Stamping Plant south of Washington Street and west of White River was the preferred site for the long-envisioned facility. The announcement was a reversal of sorts, because an earlier city-sponsored market survey identified an airport location on the far western edge of Marion County as the preferred location.

While the Indianapolis International Airport site remains a possibility according to city officials, its remote location less than a mile from the Hendricks County line has drawn criticism from judges and attorneys. A new study also shows that some residents who use mass transit would face bus rides of more than two hours each way to get to court at the proposed airport site.

On March 21, Marion Superior judges gave a grudging endorsement to the former GM site, but not before sending a message to Ballard that where courts are located is their decision.

Ballard senior policy adviser Kurt Fulbeck made a brief presentation to the Marion Superior Executive Committee during which he asked for the judges’ recommendation of a preferred site. Ballard prefers the GM site, but the city has left open the possibility of a site at the Indianapolis International Airport.

“Who do you think makes the ultimate decision on this?” Marion Superior Judge James Osborn asked. Fulbeck responded the City-County Council and project shareholders.

“With regard to where the courts are located,” Osborn said, “that’s our decision. … Nobody gets to tell us where to go.” Osborn said he was reluctant to offer an endorsement because he didn’t want to suggest the courts were ceding their authority.

But the executive committee did vote to express a formal preference for the former GM site over the airport. Marion Superior criminal judges had previously viewed a presentation March 18 on the project but withheld their comments during the public portion of that meeting.

“I think everyone said we don’t want to go to the airport,” Judge John Chavis said of the judges’ views of the two sites. Executive Committee Chairman Judge David Certo said, “We are not interested in pursuing the airport site.”

At the March 18 meeting of criminal court judges, David Rosenberg, director of enterprise development for Indianapolis, said, “We don’t think there’s been any pushback on the need” for a criminal justice complex.

But there was pushback later that day when Rosenberg presented an overview of the complex to about 35 residents who live near the former GM plant. The meeting devolved into a quarrelsome, unmoderated back-and-forth between Rosenberg and several angry residents. Those who spoke out said that they opposed a jail in their backyard and complained they had received little notice of the meeting.

“We’ve got elderly folks who’ve moved out because they’re scared to death they’re going to put a jail there,” neighborhood resident Brittany Laux said after the meeting. Laux said she planned to organize a petition against the proposal, and residents said they were worried about crime, safety, traffic and other issues.

After the meeting, Rosenberg said he believed the outspoken residents were a minority whose concerns were based on misperceptions. He said the project stands to be an economic development engine with modern facilities and a greater police presence.

Rosenberg said the investment of at least $400 million would likely be accompanied by another estimated $100 million in ancillary development. He said it would bring more than 3,500 daily visitors – 2,500 of them employees and professionals. Along with the jail, the facility also will house criminal courts; prosecutor, public defender and probation offices; community corrections; the clerk’s office and other agencies.

The favored site would allow the criminal justice complex to be built on what’s considered the least desirable third of the stamping plant site, Rosenberg said, leaving 60 to 70 acres for possible riverfront redevelopment. A justice complex proposal would require the approval of the RACER Trust, a court-appointed entity charged with environmental cleanup and redevelopment of the former industrial property.

Rosenberg told judges the stamping plant site also would allow the complex to be built at a cost of 10 to 15 percent less than the airport location. The city plan calls for the developer it chooses to design, finance, build and maintain the facility in exchange for guaranteed, long-term multi-million-dollar annual tax payments. Officials say the financing structure, consolidation of services and efficiencies created by eliminating duplication will allow the complex to be built without raising taxes.

Meanwhile, data from a study conducted by the Indiana University Public Policy Institute at the request of Marion County judges bolsters the case for the stamping plant site. The study data further argues against the accessibility of the proposed airport site along Washington Street just east of Raceway Road.

The study looked at where court users – criminal justice employees and people who are arrested – are situated in Marion County. It also examined travel times and distances to various locations the city identified in its market survey. Among the findings:

• The former GM site would be an average one-way commute of 8.19 miles. Among sites the city considered, that’s the second-most centrally located. The Citizens Coke Plant at 2900 E. Prospect St. would be closer, about 7.4 miles away on average, but not quite as accessible by bus.

• For bus riders, the stamping plant has the lowest average commute time – 68.4 minutes each way, followed by Lafayette Square and the Citizens Coke Plant, both at just over 69 minutes.

• The average one-way distance to the airport site for all court users is 15.3 miles – more than twice the current average distance to courts at the City-County Building. For residents of Lawrence or Warren townships, the average one-way trip to a court located at the airport site would be 23.8 miles. By contrast, the longest average commute to the City-County Building is 13.7 miles, also from Lawrence Township.

• Countywide, a bus trip to the proposed airport site would average 98.7 minutes, but riders from Lawrence Township would spend an average of 122 minutes each way.

• No site proposed in the city’s market survey and analyzed by the Public Policy Institute would provide a location as central to criminal court users as the current location at the City-County Building. The current average one-way commute for all court users countywide is 7.04 miles.

• The mean center for all Marion Superior criminal court users is in the 600 block of Tecumseh Avenue on the near-east side, about four blocks directly east of Arsenal Technical High School.

The Public Policy Institute findings did not measure access from the mean center for all court users to what turns out to be the closest site the city identified in its market survey. That would be the former RCA/Thomson Consumer Electronics plant site being demolished at 604 N. Sherman Drive, roughly a mile east of the 600 block of Tecumseh. The city’s market survey listed the chief weakness of that site: “Not centrally located within City.”•