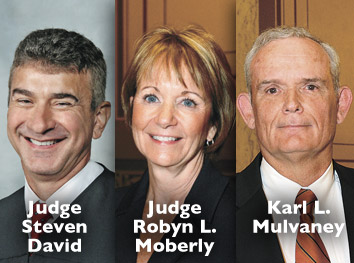 Since at least 2010, Clark County courts have held the dubious distinction of ranking first in the state’s weighted caseload measurement, but judges in the southern Indiana community are hoping the Legislature helps knock them from the top slot.

Clark County is one of seven counties that came before the Interim Study Committee on Courts and the Judiciary this fall to request new magistrate positions be created. The counties, all of which rank in the top 40 of need based on the Indiana Supreme Court’s weighted caseload measurement system, say they have to have the magistrates to assist with the increasing caseloads and overcrowded dockets.

In total, seven counties are asking for 11 magistrates. This is a large number compared to previous years where requests have ranged from one magistrate in 2013 to three magistrates and one judge in 2012, and five magistrates and three judges in 2011.

Clark County is ranked first in severity of need based on weighted caseloads, with four judges and two magistrates doing the work of more than 12 judicial officers in 2013, according to the most recent data available.

Clark Circuit Judge Vicki Carmichael said the consequences of too much work for too few judicial officers is that civil cases get pushed back. Some actions like divorces, child custody and child support modifications or enforcements are now being set for hearings in March and April of next year instead of next month, she said.

Criminal cases are forcing the civil cases aside, which concerns Carmichael. Pointing to a child support dispute as an example, she noted the wait for a resolution could mean a youngster is going hungry.

St. Joseph Circuit Judge Michael Gotsch explained that most of the public comes in contact with the judicial system through the courts that handle small claims, traffic tickets and misdemeanors. When resources are sparse, these courts can be impacted the most and citizens are left wondering why they had to wait several hours to get their speeding citation adjudicated.

The success of the counties in getting their pleas granted will likely depend on how tight the resources are. The interim study committee recommended that legislation be enacted giving the counties the magistrates.

In the Statehouse, committee chair Rep. Greg Steuerwald, R-Avon, said the Legislature will look closely at the weighted caseload measures and the level of local support when considering each county’s request.

By watching the demise of the bill during the 2014 legislative session that would have given Vanderburgh County another magistrate, Vanderburgh Circuit Judge David Kiely said he learned the lesson of being persistent.

Kiely made the only request for a magistrate during the 2013 interim session and got the approval of the Committee on Courts and the Judiciary. The bill gained unanimous approval in the House of Representatives but died in a Senate committee.

Kiely returned and started the process again with another appeal to the interim study committee.

Judges Dena Martin and Erik Allen of Greene Superior and Circuit courts, respectively, highlighted the county’s current weighted caseload measure that indicates the county courts have work for three judges rather than two. They also drew attention to the continued construction of I-69 and the growing drug problem which they are expecting to increase their caseload.

Kiely, Martin and Allen all reiterated Carmichael’s point about the consequences of an overflowing docket. The additional magistrate will help expedite the time it takes to hear cases, Kiely said, which means less time defendants have to sit in jail and less time plaintiffs and defendants have to endure the strain of waiting.

Most of the state courts asking for additional help say they would prefer a judge but are asking for a magistrate.

As Martin explained, “We honestly thought we had a better chance of getting a magistrate than a judge. We don’t want to be greedy, we just want to get some help.”

Money is the primary reason courts are choosing to request magistrates. While a judge’s salary would be paid by the state, the extra courtroom along with the bailiffs, clerks and other staff required would be paid by the county. That is a tab most judges do not think their counties would pick up.

Still, Joel Schumm, clinical professor at Indiana University Robert H. McKinney School of Law, noted that unlike elected judges, magistrates are appointed and are not directly accountable to the public. Voters have no recourse for removing magistrates from the bench.

“I don’t question the need for more judicial officers,” Schumm said. “I just wonder if magistrate versus judge is always the best answer.”

Charles Geyh, professor at Indiana University Maurer School of Law, was split on the numerous requests for magistrates. On the one hand, he said, magistrates are an extraordinarily valuable resource. On the other hand, there is cause to look at how magistrates are selected and retained.

In particular, he pointed out that magistrates do not have the same job protections as judges and can essentially be fired at will. Moreover, the magistrates must have some independence and not be under the thumb of the judges.

Marion and Porter counties are making the unusual request that the Legislature convert some judicial officers they already have to magistrates.

Judge Mary Harper from Porter Circuit Court is asking the court’s juvenile magistrate be converted to a full-time magistrate. Not only will this request have the smallest impact on the state budget, it will significantly help the local court.

Currently, the state is paying half of the juvenile magistrate’s salary. The proposed change would cost the state an additional $41,393. A full-time magistrate would be able to handle more than juvenile cases.

Marion Superior Judge David Certo characterized his county courts’ request as a “tweak.” The court wants to convert four commissioners to full-time magistrates. The change would move Marion County closer to a state-funded judiciary as the Indiana Supreme Court has envisioned, with judicial officers being elected judges, senior judges, magistrates and juvenile magistrates.

The conversion will shift the new magistrates’ salaries and benefits from the county to the state budget. The move would free local funds which the county can allocate to different programs.

St. Joseph County made the biggest request, asking that three magistrates be appointed in the Circuit and Superior courts.

The local courts waited before going to the Legislature, Gotsch said, until the county made room for the extra judicial officers. Currently, the county is renovating the old jail and replacing the cells with courtrooms so any new magistrates will have their own space to work.

In the Circuit Court, Gotsch wants a magistrate for the civil protection order court that he created. The court, already in session about three days a week, handles domestic violence, sexual assault and stalking cases. With a dedicated magistrate, Gotsch said the court would be able to offer more services to victims which will hopefully reduce the number of people who end up dropping the protective order petition.

Clark and Madison counties also emphasized to the interim committee that they have not made a request for help in several years.

“We take the attitude that we don’t go down there (to the Legislature) until we absolutely need to,” said Madison Circuit Judge Thomas Clem. “We don’t ask until we have to have it.”

Since he took the bench in 1990, Clem said the annual caseload has more than doubled to the current 500 felony cases and 4,500 civil cases. Adding to the workload are the three Indiana Department of Correction facilities in the county which generate lawsuits and complaints from the inmates.