In north-central Indiana, homeowners have learned that when they get a foreclosure notice from a bank, they do not have to immediately start packing.

But as the foreclosure process continues, they are faced with the harsh reality that they will have to fend for themselves since finding an attorney who practices mortgage foreclosures defense in that part of the state is difficult.

Timothy Peterson, plan administrator for Pro Bono District D, said the situation is causing residents to lose faith in the legal system as well as the banks. He is looking to funds from the Indiana Bar Foundation to restore some of the lost hope.

A total of $30,000 will be coming to his district and the neighboring Pro Bono District E, an area that includes Tippecanoe, Vermillion, Boone, Fulton and Wabash counties.

Peterson plans to use the money to educate both homeowners and lawyers. In addition to providing the training lawyers need to represent residents going through a foreclosure, he also wants to hold public meetings to let homeowners know they have options when a notice arrives from the bank.

Peterson also intends to start monitoring the court docket so when foreclosures are filed, his office will send the homeowners a letter telling them not to panic and to come and talk to one of his attorneys.

“These are situations where lawyers can make a big difference in someone’s life by keeping them in their home,” Peterson said.

The money is part of the $584,646 the Indiana Bar Foundation received from the Bank of America settlement with the federal government over the bank’s sale, structuring and issuance of residential mortgage-backed securities and certain other mortgage loans. In 2014, the U.S. Department of Justice and the financial institution reached a $16.7 billion agreement of which $30 million would be deposited in Interest on Lawyer Trust Account programs across the country. 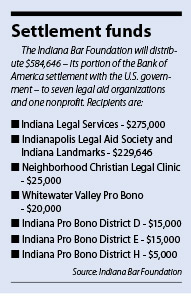 The funds are to be targeted for foreclosure assistance and community redevelopment.

Through a grant program, the IBF received applications from seven legal aid and pro bono organizations in Indiana. Ultimately, the grant committee, chaired by Indiana Court of Appeals Judge Melissa May, decided to divvy up the funds between all the nonprofits rather than fully funding a few proposals.

“We wanted to reach as many people as possible,” said Charles Dunlap, executive director of the foundation. “It seemed appropriate to give everybody something.”

The grant recipients were announced during the foundation’s 65th anniversary benefit dinner Nov. 6 in Indianapolis.

Coupled with the $800,000 annual appropriation from the IOLTA program to the 12 pro bono districts, the foundation is awarding $1.4 million for civil legal assistance. This is the first time in six years the statewide organization has given out more than $1 million to legal aid and pro bono entities.

The Bank of America money has helped foster a new partnership between Indianapolis Legal Aid Society and Indiana Landmarks. These two nonprofits had never worked with each other but decided to work together at the encouragement of retired Indiana Chief Justice Randall Shepard.

Indiana Landmarks will use some of the funds to help rejuvenate neighborhoods and, as it finds residents in foreclosure, it will refer them to ILAS for legal assistance. Marsh Davis, president of Indiana Landmarks, recounted one instance where his organization eventually had to hire an attorney to help a property owner who had declared bankruptcy and was facing foreclosure.

“What we hope we gain out of this as an organization is to be all the more helpful to property owners facing very difficult situations,” Davis said.

Although nationally the mortgage foreclosure crisis has peaked, there are still homeowners needing help. John Floreancig, general counsel at ILAS, said his office continues to handle foreclosure cases as well as the collateral legal issues that crop up and hinder an individual’s ability to find and pay for housing and to overcome general debt issues.

With the grant money, he believes ILAS will be able to be more proactive and help clients prevent foreclosure. Currently, by the time a homeowner arrives at the legal aid office, the foreclosure is already moving forward.

The joint program with Indiana Landmarks “will allow us to identify some real problems in low-income housing and help people find affordable housing and not be in a slumlord situation,” Floreancig said.•