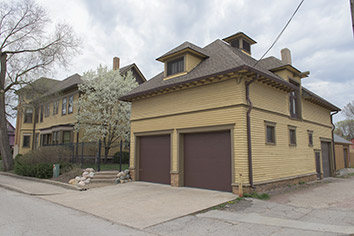 Some homeowners are seeing their garages as capable of more than keeping the family car and gardening tools protected from the weather.

The structures are being transformed into housing for aging parents or adult children just out of college. Or property owners can offer the living spaces to tenants and use the rent to cover their own household costs such as taxes, utilities and maybe a child’s education. Sometimes the garages or carriage houses are turned into home offices, studios or personal gyms.

Turning a garage into “echo housing” is not a trend sweeping across Indiana, but the city of Indianapolis is addressing it for the first time. In the new Consolidated Zoning/Subdivision Ordinance, the city is laying out new regulations to govern the development and use of this type of dwelling.

Dubbed “Indy Rezone,” the new zoning ordinance is the first overhaul of Indianapolis’ zoning regulations since the city and Marion County combined into one governmental entity in the early 1970s. Tammara Tracy, principal planner for the city of Indianapolis, undertook the rewriting project because she came to realize the old ordinance was broken. Increasingly, permits were chock-full of variances.

“(The old ordinance) wasn’t doing what everybody wanted it to do,” Tracy said. “The small incremental tweaks just weren’t cutting it.”

Work on the new ordinance began in October 2010 when the city was notified it had received a federal grant to help with the project. In total, the project cost about $1.2 million, with roughly $700,000-plus coming from the U.S. Department of Housing and Urban Development. The project enlisted outside consultants and gained the approval of the City-County Council in September 2015. It took effect April 1.

While Indy Rezone is raising some questions as any ordinance would, lawyers are mostly looking at it favorably.

She explained that economic development is linked to zoning and the Circle City has to keep pace with future trends to remain viable. As Indianapolis competes in a global economy, it has to offer the kinds of housing choices and other amenities to ensure that the talent local businesses need comes and stays in the city. If Indianapolis does not adhere to best practices that create livable cities, it could lose professionals and educated residents to competing municipalities like Austin, Texas; Charlotte, North Carolina and Nashville, Tennessee. 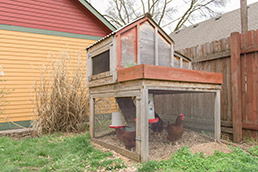 With chickens increasingly taking up residence in backyards around Marion County, the city of Indianapolis has laid some parameters for homeowners in its new zoning ordinance. (IBJ photo/Eric Learned)

The new ordinance is a blend of regulations that guide the development trends already emerging in the city and attempts to foster new trends. Chickens, for instance, which are increasingly being raised in backyards around the city, now are regulated by the ordinance that allows a maximum of 12.

Another example is the turning of garages into living spaces or what Indy Rezone calls “secondary dwellings.” The new regulations will set standards as more of this type of development appears to satisfy the needs of baby boomers who want their elderly parents close as well as the needs of millennials who are not following the traditional path of marriage, children and mortgage, but instead want alternative housing that is affordable.

With the secondary dwellings bringing additional residents into established neighborhoods, retailers and service providers will be enticed to open stores nearby.

The new ordinance further encourages increased density of people by including mixed-use districts that combine commercial, service and residential zoning into one building or one geographic area. Mixed-use developments have been popping up in cities and towns around the state, but the previous ordinance did not provide any regulations for them in Indianapolis.

Developers relied on a couple of zoning classifications that could be adjusted for building a residential complex with retail on the first floors, but the new provisions provide standards. Still, Tracy said the new ordinance lets the market determine the type and location of mixed-use developments rather than forcing them into areas where they will not work.

Gregory Ewing, land planner in the real estate practice group of Bingham Greenebaum Doll, said the mixed-use provision clearly focuses on the concept of allowing people to work, live and play in the same area. Other provisions in the ordinance further that goal by moving buildings closer to the street, adding more trees and reducing parking.

Indeed, the city is hoping the concentration of businesses and homes will cause more people to leave their cars parked. They will be likelier to walk, bike or take public transportation instead of driving to the neighborhood grocery, dry cleaner or restaurant.

Anticipating that people will continue to drive less, the new ordinance cut the minimum number of parking spaces required for new developments. The mere mention of the new provision caused Tracy to groan, but she explained the ordinance brings more consistency for property owners and neighbors.

Brian Tuohy of Doninger Tuohy & Bailey LLP served on the steering committee that helped with the rewriting of the zoning ordinance. He recalled the parking issue igniting a “big discussion.”

For years, he said, developers had to get variances because they didn’t have enough space to meet the number of parking spaces the old ordinance required. Indy Rezone, in some instances, will decrease the size of parking lots with no negative impact, but in other circumstances it may cause headaches.

Tuohy said the parking revisions tie into the city’s push to increase transit ridership; however, he is uncertain in such a car-oriented town residents will leave their autos behind.

“I think Indy is a pretty easy city to drive around,” Tuohy said. “I think it remains to be seen whether change in the zoning ordinance would incentivize people to drive less.”

Tracy said while rewriting the zoning ordinance, the city was “pretty adamant in making sure we didn’t make it harder for development.” She believes that goal was reached.

Joseph Calderon, partner at Bose McKinney & Evans LLP, described the new ordinance as the “city’s best effort to modernize the zoning regulations.” For example, with the mixed-use districts, Indy Rezone reflects what the market is demanding but removes the hassle of developers having to seek a bunch of variances to create a building that combines residential and commercial.

But, he said, developers are still waiting to see if the ordinance gives them the flexibility they need and does not bring about any unintended consequences. In particular, he pointed to the new requirements for more trees. The so-called “green factor” could increase the costs of the projects to a level that the market will not be able to bear.

Kate Collins, director of governmental affairs at the Builders Association of Greater Indianapolis, also noted the need for allowing flexibility. A zoning ordinance that is too prescriptive will not give developers the ability to meet consumer demands.

How Indy Rezone will work will start to become clear as new projects are launched, Collins noted. Developers, attorneys and the city will learn more as permits go through and possibly identify places in the new ordinance where amendments may be needed.

Collins said there will be growing pains.

“It’s definitely going to be a big change,” she said, “but hopefully everybody is happy with the results.”•