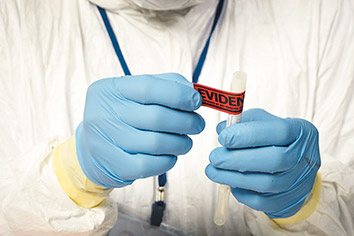 A man convicted of rape wasn’t permitted at his trial to introduce DNA evidence collected from the victim when she sought medical attention. The DNA was from another man who also was at the party attended by several other people who testified the crime took place.

During oral arguments April 7, some Indiana Supreme Court justices appeared dubious of withholding the DNA results from the jury. But they also wrestled with whether this is the very sort of evidence barred under the state’s rape shield law.

Jordan Pribie was convicted in Clinton Circuit Court of raping C.G. at a party during her senior year of high school. The two were among several young adults who spent a night drinking heavily, smoking marijuana and using drugs, according to the record. Witnesses for the state said late into the party, the victim was found naked and crying in Pribie’s room, and that Pribie admitted he’d done something wrong. The victim, C.G., afterward had consensual sex with her former boyfriend and Pribie’s housemate at the time, Josh Curl, whose sperm was later discovered in a rape kit.

But the jury never learned the result of the DNA test, instead hearing only that Pribie’s DNA wasn’t found. Pribie’s defense attorney argues the state also mischaracterized the relationship between the victim and her boyfriend as non-sexual. The state’s case, meanwhile, asserts Pribie raped the victim but did not ejaculate, and any error was harmless because of voluminous other evidence against him.

Deputy Attorney General George Sherman argued the prejudice to the victim had the trial court admitted the DNA results is the danger that the jury would use this evidence in the wrong way and speculate about the victim’s character and behavior.

“Which is exactly why we have the rape shield rule, because in the past, if a victim reported a rape, it was pretty much open season on the victim,” he said.

“Everything you’ve just been indicating,” he said to Sherman, “is the sort of stuff that jurors using their common sense would say, ‘yeah, that’s not the way people act.’ And we don’t want to prevent jurors from having that kind of information. We want them to make common-sense judgments.”

But Sherman said if the DNA results had been given to the jury, it could have prompted speculation that would “essentially put the victim on trial instead of whether a rape took place, and I think that’s a key consideration for the rape shield statute in this instance.”

Sherman said the jury also heard the defense cross-examine the victim, who admitted among other things that she wanted to have sex with Curl. “There is a lot of evidence in the record that the defense could use to show the interest between the victim and Josh Curl,” he said.

The Court of Appeals affirmed Pribie’s conviction, concluding there were no grounds to admit the DNA results that are generally barred under Indiana Rule of Evidence 412. The rule, with narrow exceptions, prohibits “evidence offered to prove that a victim or witness engaged in other sexual behavior.”

Heather Shumaker, who represented Pribie at the Supreme Court, said rather than shielding a victim, the rape shield law withheld evidence that prejudiced her client.

“An exception to the rape shield statute has always been evidence that would violate the defendant’s constitutional rights if it wasn’t admitted,” Shumaker said. The state’s characterization of C.G. and Curl’s relationship as just friends “is a false and misleading representation of what happened,” she told the court.

“That is what the jury thought they were, just friends,” Shumaker said. “The jury should have been able to hear everything that happened that night.” Inclusion of the DNA evidence would have created “an entirely different analysis.”

Justice Robert Rucker seemed especially doubtful of the defense’s theory that the victim concocted a story that she was raped by Pribie to conceal a consensual relationship with Curl. He pressed Shumaker on the relevance of the DNA evidence in Pribie’s case, especially in light of multiple people who testified that Pribie assaulted C.G. “Do you discount the evidence of the folks who heard (C.G.) say ‘no, stop, don’t do this?’”

Shumaker countered that there were multiple versions of events from people at the party who were extremely intoxicated. She told justices that C.G. didn’t say she was raped by Pribie until after having sex with Curl, and initially answered “no” when another female asked her if she had been raped by Pribie. She said admission of the DNA evidence went to C.G.’s credibility.

But Chief Justice Loretta Rush fenced with Shumaker on evidence that went to the victim’s credibility, noting other evidence suggesting C.G. and Curl may have had more than a friendly relationship was before the jury.

“What is the purpose of a rape shield statute if it can be pierced with regard to looking at victim credibility on their other sexual behavior?” Rush asked. Shumaker said the shield law aims to avoid blanket inquiries of a witness or victim’s sexual behavior, and that’s not the defense’s intent in this case.

“Her relationship with Josh Curl is in the middle of the time she says this rape has happened and before she ever makes a disclosure that she was raped,” she said. Jurors, she said, “should have all the facts, and they should not have just a portion of the facts. … In this case, it is so intrinsically related.”

A separate issue in the appeal is the allegation of juror/bailiff misconduct. According to the Court of Appeals record, a juror informed a bailiff she knew people on both sides of the case. The bailiff asked if this would prejudice her opinion, and the juror answered no. The bailiff didn’t inform the judge or counsel.

Shumaker said this was a violation of Indiana Jury Rule 24 and not harmless error as the COA held. The rule specifies that in such instances, counsel for both sides shall examine the juror under oath. She noted the conversation wasn’t even known until a motion to correct error hearing after Pribie’s conviction. “It was just by accident that this came out,” she said.

Sherman countered that the COA was correct to rule any error was harmless, but if the case is remanded on this issue, it should be for no more than an evidentiary hearing in which the parties are on notice that Pribie is raising a claim of bailiff misconduct.