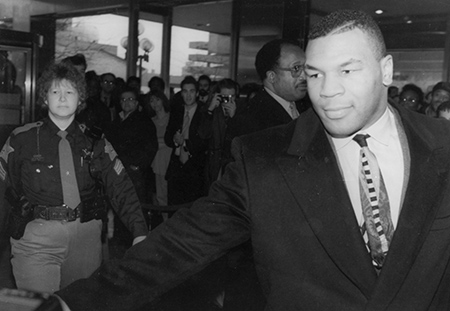 It’s been 25 years since former heavyweight boxing champion Mike Tyson was convicted of rape in an Indianapolis court, but the legal professionals who were involved in the case can still recall it well.

Patricia Gifford, the now-retired Marion Superior Court judge, remembers the extra steps she took to maintain order during the highly publicized court proceedings, such as bringing in an extra bailiff. And Greg Garrison, the prosecutor who successfully convinced a jury that the 24-year-old Tyson raped 18-year-old Desiree Washington, recalls counting 70 flashbulbs going off in his face during his walk to the elevator on just one morning.

Gifford and Garrison shared their thoughts on one of Indianapolis’ most famous trials during an event sponsored by the Indianapolis Bar Association’s Standing Committee on Professionalism, “The Tyson Trial, 25 Years Later: Take Opposing Counsel to Lunch.” The Sept. 12 program featured not only Gifford and Garrison’s recollections of the trial, but also their thoughts on maintaining civility in court proceedings, a task made more challenging for them due to the widespread publicity of the case. 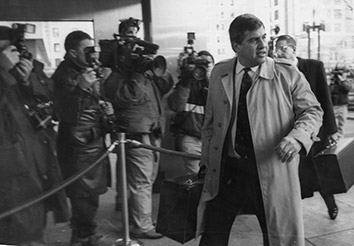 Mike Tyson, top, and defense attorney Jim Voyles, above, were at the center of heavy media attention during the boxer’s 1992 rape trial. (IL file photos)

For example, Garrison recounted the camaraderie he shares with Indianapolis attorney Jim Voyles, a member of Tyson’s defense team. Voyles was unable to attend the Sept. 12 event due to health reasons.

Garrison said he has always held Voyles in high regard, but some people assumed that because they were working on opposite sides of the case, they continued to carry the animosity of the trial with them when they left the courtroom. So when a pool reporter photographed the two Indianapolis attorneys sharing a laugh outside court one day, many people were taken aback.

“They had no idea what to do with that, because so many places throughout the country looked at these two ‘arch rivals’ — should-be enemies — who are cutting up and acting silly,” he said.

The extensive media presence surrounding the trial could have made it a more contentious proceeding, Garrison said, but due to the competence of the attorneys and the rules imposed by Gifford, the court was able to maintain order. Both Garrison and Voyles, who spoke with IL after the event, praised Gifford for the way she kept control over the proceedings, but the judge recalled the enormity of the task of enforcing traditional rules with a media presence that far outpaced the court’s capacity.

“We were inundated with requests from people, from media, who wanted to be in the courtroom,” the judge said.

Gifford’s office received roughly 150 requests for access to the courtroom from various media outlets around the state and country, who also needed space to work, park their satellite trucks and communicate with their offices. The solution was to house members of the press in the then-vacant basement of the City-County Building and obtain special permission from the Indiana Supreme Court to provide reporters with access to the trial via closed circuit TV.

The additional bailiff was brought in to maintain order among reporters in the basement, while 25 seats were reserved in the courtroom for members of the press. To satisfy reporters’ desire to see Tyson, Gifford said Voyles brought him in through the same door at the same time every morning, giving them the opportunity to photograph the legendary boxer as he was brought into court each day. Voyles recalled his close relationship with Tyson, noting that he went on to represent the boxer in later litigation and has kept in touch with him over the years.

The attorneys were likewise cognizant of the need to carefully navigate the massive media presence, Garrison said, so both the prosecution and defense remained intentionally tight-lipped outside of the courtroom. Gifford also imposed strict rules on what the attorneys could discuss with the media, a move the prosecutor praised as the right decision for the integrity of the trial.

Gifford’s media rules also helped keep the attorneys in check, Garrison said while jokingly telling the crowd they, and all other attorneys, are egomaniacs. Keeping reporters at bay prevented counsel on either side of the case from becoming more concerned with their on-camera presence than with the logistics of the case, he said.

Gifford’s rules for the trial also helped maintain civility among the attorneys, something Garrison thinks is lacking in today’s legal practice. In a legal climate where fewer and fewer cases make it to trial, Garrison said young attorneys have less of an understanding of how to maintain amicable relationships with opposing counsel or the importance of doing so.

Similarly, Riley Bennett & Egloff LLP partner Elizabeth Chitty Green, a member of the Professionalism Committee who opened the program, lamented the fact that in some cases, the first time she meets her opposing counsel is in court at a hearing. Garrison acknowledged that it’s not uncommon for attorneys on opposite sides of a case to not know each other outside the courtroom. He encouraged attorneys, especially those who are new to the practice of law, to reach out to their opposing counsel before beginning a case and ask to meet for lunch or a cup of coffee.

Simple gestures like that can help break the ice and make the legal proceedings a smoother process for all involved, he said. He recalled the benefit of those kinds of relationships to his legal career, telling the audience that even when he was involved in contentious trials such as the Tyson case, his friendly working relationships with opposing counsel prevented that animosity from following him home.

“Those kinds of connections I have, you have to work at it,” he said.

Voyles said Garrison was once his intern and Gifford was his classmate, prior relationships that made it easier for him to maintain positive, respectful relationships with the other legal professionals working on the case. While he often found himself frustrated with members of the defense team — which he said did not always provide the most effective work for Tyson — Voyles agreed that having a good relationship with opposing counsel prevented hostility among the two attorney teams.

Bingham Greenebaum Doll LLP attorney Kevin McGoff, another member of the Professionalism Committee, similarly told the audience that respectful relationships among attorneys, especially among opposing counsel, lead to more effective advocacy. That’s because the attorneys are able to put all of their focus on the best interests of their clients when they know their opposing counsel will conduct themselves in a respectful, professional manner.

“It’s less about us as lawyers and more about, ‘How are we advancing whatever we are doing for our clients?’ be it transactional or litigation,” McGoff said. “If the conversations are geared toward how we can advance our clients’ claims or do good work for our clients and it’s less about us, it makes it easier and it makes for an opportunity for having a lot more friends.”•