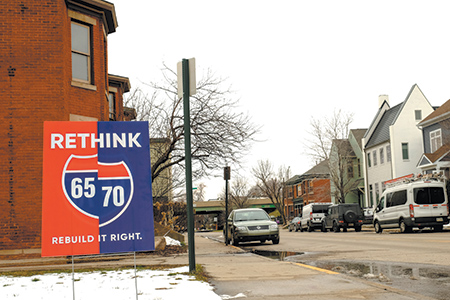 Across the country, infrastructure is aging and deteriorating, but some communities are tapping the brakes on rerouting interstates and questioning whether roadways built to move large volumes of traffic are good for cities.

The concern over the proposed redesign of the Interstate 65/Interstate 70 interchange north of Indianapolis is one example of this. Residents and business owners have come together to form the Rethink 65/70 Coalition, which is advocating for the state to look at alternatives rather than settling for a variation of the elevated concrete loops and curves comprising the North Split.

“What we’re seeing today is interstates work really well at connecting cities,” said Mark Beebe, architect at Lancer Beebe LLC in Indianapolis and a part of Rethink 65/70 leadership. “Once you get into the city, they do a poorer job of really being a functional transportation mover and … they don’t add value to the urban core.”

Anytime a major road project is proposed, attorneys become an integral part of the process. They assist with many facets of the undertaking such as financing, zoning, and land acquisition.

Although they would likely have unique insight into the question of how to keep traffic moving efficiently without disrupting neighborhoods, they are reluctant to share their views. Multiple lawyers and law firms contacted for this story either did not return the messages or declined to comment.

Walkability and connectivity are the buzzwords that merge into today’s conversations about interstates. The freeways built in Indianapolis in the 1960s and 1970s sliced through neighborhoods. Now, with people choosing to live in the city rather than the suburbs, neighborhoods want to get reconnected because their residents prefer to walk or bike wherever they want to go.

Overlaid onto this is the introduction of the Red Line, a rapid transit service in Indianapolis, and the expected surge in the use of autonomous vehicles.

Tim Maloney, senior policy director for the Hoosier Environmental Council, explained transportation systems cannot just focus on vehicles and creating space for more vehicles. They have to take into account the different options for effectively moving people and goods.

“Transportation systems are not just about roads,” Maloney said. “I think (the Indiana Department of Transportation) is finally starting to recognize that.”

Could a port authority help?

In late March, Beebe and Kevin Sweetland, a landscape architect and member of Rethink 65/70, took their presentation to the residents of the Old Southside neighborhood. They showed renderings of one alternative to replace portions of the elevated expressways that slice through the city with a multimodal boulevard system. This type of roadway flows into city streets, and while still moving traffic, allows for trees, walkways and new business development.

At one point, Sweetland described interstates as an “armpit” and an “eyesore.” Certainly, Old Southside residents are familiar with what expressways can do. They listened to the presentation in the Sacred Heart Parish Hall, about a block from I-70, which cuts off their neighborhood from downtown Indianapolis.

The Indiana Department of Transportation announced in September 2017 its plans to reconstruct the 50-year-old North Split. According to the state agency, the tangle of roadways was decayed and needed to be rebuilt to improve safety and decrease congestion.

INDOT’s original proposal, which came with a $250 million-$300 million price tag, called for reconstructing 32 bridges and widening the roadway.

Since then, the department has met with neighborhood associations and members of the Rethink Coalition. It has said it is broadening the scope of its study in response to the community’s questioning whether rebuilding the interstate is the best solution. Among the alternatives being reviewed are depressed highways and surface boulevards with the interstate traveling underneath in tunnels.

Attending the Rethink presentation, architect Stephen Alexander, owner of Prince Alexander architecture firm in Indianapolis, told the Old Southside gathering that the driver behind any redesign plan that INDOT chooses will be money. No matter how well-liked an alternative design may be, it will not be built if the cost is too high.

INDOT, on its website, projected the price of the city tunnel/boulevard construction would be $3.5 billion. It is basing that estimate on a study from Syracuse, New York, which found the 1.6-mile tunnel in the city would cost $3.6 billion plus $10 million per year to maintain. INDOT does not detail what would be involved in doing a tunnel project in Indianapolis, but the Syracuse review noted that going underground there would require the demolition of 12 buildings and the replacement of a railroad bridge.

Alexander pointed to Indiana’s port authority law as a solution to the money crunch.

The City of Indianapolis could establish a port authority and use it as an economic development tool. Through the port authority, the city could redevelop the parcels of land that will become available as part of the multimodal design.

Going to the multimodal boulevard system would shrink the footprint of the interstate and make the property alongside the roadway attractive to businesses looking for prime locations. Then the new tax dollars generated from the new development could be used to cover the extra costs of the alternative interstate design.

Sen. John Ruckelshaus, R-Indianapolis, attended the Old Southside meeting, learning about the Coalition after seeing the red and blue Rethink 65/70 signs start sprouting in his district. He agreed with Beebe and Sweetland that the redesign of the North Split along with the subsequent interstate refurbishments will reshape the city for the next 50 years.

The senator sees the potential for an alternative design to spur new businesses and bring more people back into the city to live, which would increase tax revenue. But, he is cool to the idea of establishing a port authority.

“Probably at this point, it’s unnecessary, because we do have good redevelopment tools between the city, and state and federal government,” Ruckelshaus said.

An Indianapolis transplant, Greiff remembers her trips from Chicago to Cincinnati as the interstate system was being built. She didn’t think much about the construction until she moved to the Circle City and, in her words, saw what the roadways had destroyed.

“These historical neighborhoods were torn asunder, not to mention specific beautiful buildings torn down,” Greiff said. “It just broke my heart.”

The construction of I-69 from Indianapolis to Evansville demonstrates that even outside of urban centers, interstates have consequences.

Although the Hoosier Environmental Council pushed for the alternative of upgrading U.S. 41 and then connecting into Indianapolis by way of I-70, INDOT moved forward with building a new road across the southwestern part of the state. Now the project is looking to transform U.S. 37 into I-69 connecting Martinsville to Indianapolis.

Maloney noted residents and business owners on the south side of the city are echoing the coalition’s concerns about disruption the interstate could have on their neighborhoods and local economy.

Away from the populated areas, the interstate has raised concerns. According to Maloney, contamination linked to the new expressway has been found in some springs and underground streams in Indiana’s karst area. More than 1,000 acres of forest also have been chopped down.

He said even though new seedlings have been planted, “it’s going to be many decades before a field of tree saplings replaces the ecological function of mature forests.”

Alexander noted all the impacts from an interstate are not necessarily negative. His office in Indianapolis is part of the Stadium Village Business Association slashed by I-70. While the “massive mountain of roaring trucks and pollution” disconnects the south end of the city from the Old Southside neighborhood, the exit and entrance ramps bring a flow of people coming to sporting events and dollars to the restaurants, hotels and retailers in that part of town.

Still, as people move back into cities, they want quality of life. Alexander said they want connectivity — pedestrian-friendly streets dotted with welcoming shops and eateries. That kind of environment does not fit well with interstates.

Greiff, a public historian, is hopeful INDOT will reconsider its plans for the North Split. She has fought to save historical buildings and despite some losing efforts, she has had some victories.

“People don’t realize how much heritage is part of them until it’s gone,” she said. “Then they are landless without any sense of themselves. Your identity is not just you alone, but your place where you live.”•