Home » Working hard or hardly working: Survey says half of partners not busy 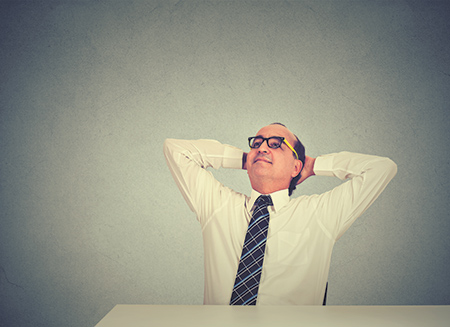 It’s frustrating for any high-performing employee: You’re glued to your computer, fingers furiously flying across the keyboard to finish your report, brief or project. Then you look over and see a co-worker chatting with a friend, playing on their phone or scrolling through their Facebook feed, seemingly without a care or a deadline to meet.

Employees who don’t carry their weight are common in the American workforce, and the legal profession is no exception. According to the Altman Weil 2018 Law Firms in Transition Survey, 83.2 percent of attorneys report the presence of chronically underperforming lawyers in their firms.

That finding is not new, as nearly every iteration of the Law Firms in Transition Survey has identified underperformance as a problem in the profession. Locally, Indiana law firm consultants and managing partners agree that underperformance has been a longstanding issue, though on a smaller scale here than Altman Weil’s national findings report. 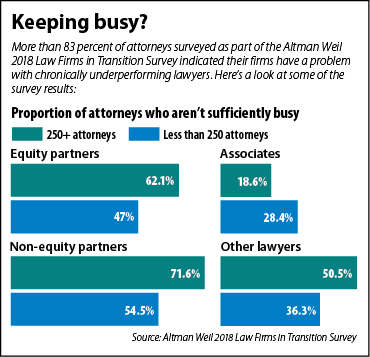 There’s no one reason why some attorneys don’t seem to stay busy, but changes in the legal profession over the last decade have exacerbated the issue, attorneys say. Though there are several methods for improving lawyer productivity, consultants say law firm leaders would do well to remember that the continually changing nature of the profession means firms must adapt to keep their employees busy and their business competitive.

“That’s the message – this is not going away,” survey co-author Eric Seeger said.

The 2008 Great Recession may have aggravated the factors that can cause lawyer underperformance, but Seeger said a noticeable decline in lawyer productivity began in 1999. That year, average billable hours reached their peak before beginning a slow decline, he said.

John Smock, of Lake Forest, Illinois-based Smock Consulting, identified a similar timeline and said that because of the decline in billable hours, the legal profession is overstaffed. That means there’s not enough work to go around, so part of the problem of underperformance simply can be attributed to supply and demand.

Stiffer competition is also a contributing factor, Ice Miller LLP chief managing partner Steve Humke said. Looking specifically to Indianapolis, Humke said it’s not uncommon for local firms to have to compete with attorneys in Chicago, Cleveland or even online for clients. That’s a stark contrast from when Humke moved to Indiana in the early 1990s, when three large firms dominated the market and maintained legacy clients.

“If you think about the model for making money in a fee-for-service arrangement, you bill as many hours as you can, and the more you bill, the more money you make,” Ryan said. “In many instances, the exact opposite is incentivized with alternative fee arrangements. The goal for us is to do a piece of work as efficiently as we can, and there may be a fixed fee tied to that body of work.”

In today’s legal market, firms that want to recruit lateral hires are looking for attorneys who will bring a client base with them and who have the ability to find new clients at their new firm, said Jim Bindley of Bindley Associates, an Indianapolis-based legal recruiting business. But sometimes, Smock said the cause of underperformance can be traced to an attorney’s struggle to do the latter.

That struggle is sometimes tied to skill, Ryan said, noting law school does not teach attorneys about the sales aspect of being a lawyer. But many times, the problem represents a lack of effort toward meeting new clients or connecting with office rainmakers, Smock said. 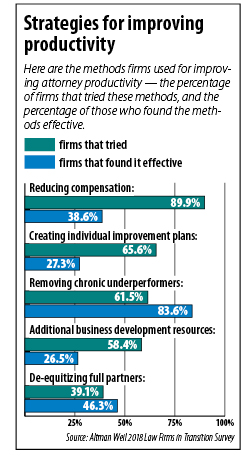 “They will sit in their office and say, ‘They don’t give me enough work,’” he said.

Inflexibility is another personal factor that can reduce attorneys’ productivity, Humke said, noting that the days of an attorney working with the same clients in the same practice area for the entirety of their career are gone. Instead, attorneys must now be willing to adjust their practices to meet the fluid needs of the market, he said. Those who are unwilling to do so — particularly senior partners — may find themselves without enough to do.

The problem of underperformance does not present a cut-and-dried solution. While the Altman Weil survey reported 89.9 percent of respondents address the issue by reducing an underperforming attorney’s compensation — the most commonly reported method — only 38.6 percent reported that reducing compensation solved the problem.

Smock agreed that reducing compensation is not always effective because often, the underperforming attorney is still earning more than their work is worth. If that’s the case, the attorney will likely stay at the firm for the paycheck without increasing their contribution.

At Hall Render, equipping attorneys with new business development skills has proven to be the most effective method for increasing productivity, Ryan said. The firm recently hired an outside consultant to provide business consultant training, and the biggest takeaway was that developing a strong professional network will create more work opportunities.

“We’ve had unprecedented business development growth just by putting more focus on it and training our attorneys,” Ryan said. “We’ve had a number of attorneys who have surprised themselves at how capable they are once they tried some of the techniques that our outside consultant provided to us.”

At Ice, Humke said his firm encourages attorneys, even seasoned partners, to change the nature of their work if their practice becomes stale. That approach shows attorneys that the firm will stand behind them if they want to retrain themselves while also discouraging them from leaving the firm due to a changing market or firm economics.

Inherent in each of these methods is the need to meet each attorney where they are and develop an individualized plan to boost their performance. Smock credited personal intervention as one of the most effective ways of improving productivity.

Aside from the financial drain underperforming attorneys can place on a firm, Seeger said they can also serve as a source of contention within the office. Underperformers may feel singled out, while high performers may become resentful of carrying a much heavier workload, he said.

Sometimes, the investment in an underperforming attorney may not pay off, Smock said. When that happens, it’s likely time for that attorney to move on from the firm. Though it’s never easy for firms to let an attorney go, it’s a necessary evil for maintaining office morale and ensuring attorneys’ services are used where they’re needed, Smock said. Plus, firms often find that their financial situations improve when attorneys are contributing at full capacity, he said.

“It’s amazing how much impact it can have on the bottom line,” Smock said. “That’s not why you do it, but it ends up being a very positive thing.”•