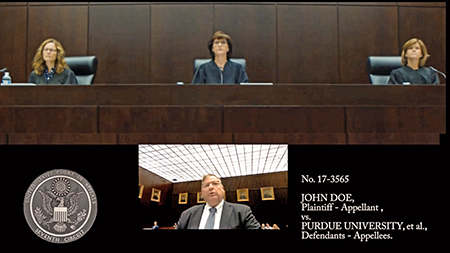 Prior to appearing before the 7th Circuit Court of Appeals, attorney Philip Byler did not alter his routine.

Byler arrived in Chicago a few days before oral arguments and holed up in a hotel a couple of blocks from the federal courthouse to study and prepare. Then, on the day of the arguments, he donned his normal, “very conservative” court attire of a dark navy blue suit, tie and wingtip shoes.

“I just did my thing,” said Byler, senior litigation counsel at Nesenoff & Miltenberg LLP in New York and a DePauw University graduate.

However, the 7th Circuit did something historic. For the proceeding in Byler’s case, John Doe v. Purdue University, et al., 17-3565, the appellate court turned on the cameras and made its first video recording of an oral argument.

The recording and preceding rule change happened at the 7th Circuit with hardly any fanfare. A small note was posted on its website when Circuit Rule 11 was adopted in May 2018, and after the Doe arguments, a link to the video was slipped onto to the court’s opinions and oral arguments web page.

According to an email from the court clerk, the 7th Circuit decided in 2017 to explore videotaping oral arguments as part of its belief that “it would be a benefit to the public and the bar.” A committee was formed to examine what the technological and cost requirements would be, as well as to review the video policies of other circuit courts around the country.

The work eventually led to the crafting of the 7th Circuit’s Operating Procedure Rule 11.

LaPorte attorney Martin Kus called the move a “significant step” but, echoing the consensus of many lawyers, said the cameras would not change how he prepares or presents his appellate cases. Most legal practitioners, Kus said, will prepare, research and argue just the same regardless of whether they are being video-recorded. They will speak to the court rather than to the camera, he said, because the people who may watch the video will not be issuing the ruling.

Nevertheless, Kus, partner at Newby Lewis Kaminsky & Jones LLP and member of the 7th Circuit Bar Association’s board of governors, like other attorneys is excited about the cameras. Not only can lawyers gain insight into the courts by watching the video recordings, but nonlawyers can learn about how the judicial process allows hotly contested issues to be debated and decided according to the rules of law and accepted facts.

“You get a great education in civics,” Kus said.

Not every oral argument is videotaped at the 7th Circuit. Under Rule 11, a request for a video recording must first be submitted to the clerk of the court, and then the parties to the case are allowed to comment on or object to the camera being turned on.

But the ultimate decision resides with the three judges assigned to hear the arguments. They have sole discretion over whether to allow the video recording.

The request for videotaping the Doe arguments came from Brooklyn College history professor KC Johnson. He follows and regularly writes about college sexual misconduct cases involving Title IX claims, such as the Doe case, and while perusing the 7th Circuit’s website before the oral arguments, he discovered the rule change.

Purdue University, according to the court’s docket, objected to the recording being made. The school’s attorney in the case, William Kealey, partner at Stuart & Branigin LLP, did not respond to an email requesting comment.

Byler, who represented John Doe, did not have any concerns about the use of the cameras. He said he countered Purdue’s objection by asserting the case was worth publicizing because it involved a matter of public interest. Although the letters from Johnson and the attorneys have not been made available, the panel of Judges Diane Sykes, Amy Coney Barrett and Amy St. Eve granted Johnson’s request.

Already the 7th Circuit makes audio recordings of all oral arguments, which Johnson said provides a better flavor of what happened in the courtroom than merely reading the transcript. But video is superior and makes following the proceedings easier, he said.

On the day of the Doe case, Johnson noticed the audio file was posted on the court’s website, but the video was not. He called to inquire about the delay and was told the clerk was trying to find a space on the web page to put the video link.

“I love the audio files, but video is just much more real,” Johnson said. “You can see the judges in real time as they engage with the lawyers. It’s just a much better experience.”

Learning with your eyes

Eric Pearson, senior counsel at Foley & Lardner LLP in Milwaukee and former law clerk for Sykes, said the appellate court has the technology to allow attorneys to either call or video-conference if an unforeseen event, such as inclement weather, prevents them from appearing in-person. Indeed, Pearson told the story of one lawyer who was in an auto accident on the Dan Ryan Expressway while headed to court, so he gave his oral argument over his cellphone while waiting on the tow truck.

As for the impact of video recording, the Wisconsin attorney said the ingredients for a good oral argument will not change. A successful appellate appearance will still have to include having a good dialogue with the judges and answering all their questions.

Pearson speculated that an attorney would be taking a risk if he or she lobbed something in an attempt to play to the camera.

Even so, some attorneys conceded the presence of the video recording might make them stand a bit straighter, quit waving their hands as much or become conscious of how they appear. Also, some thought the judges, knowing they will be on camera, may read the briefs more carefully and be better prepared.

Many Hoosier lawyers are likely accustomed to being videotaped because both the Indiana Supreme Court and Indiana Court of Appeals use cameras. Also, the Southern Indiana District Court was part of a three-year pilot project in the 1990s that allowed television cameras in the courtroom. Even though the participating courts, in general, were in favor of continuing the practice, the Judicial Conference pulled the plug.

BJ Brinkerhoff of Katz Korin Cunningham in Indianapolis said watching a recording of oral arguments from other courts provides some valuable lessons. A written opinion tells the attorney the ruling of the court, Brinkerhoff said, but the recording shows how the court arrived at its decision.

“I watch oral arguments,” Binkerhoff said, noting the cameras can capture people’s reactions and body language, which is very informative. “I think the ability to see allows you to learn just as much with your eyes as with your ears.”•