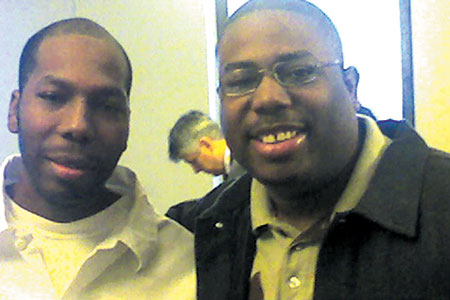 It was a sight neither of them ever expected to see. As their client, 42-year-old Domineque Ray, lay strapped to a gurney in an execution chamber, Peter Racher and Theresa Willard were powerless.

The Indianapolis attorneys had spent years — in Peter’s case, nearly two decades — trying to save Domineque’s life through the law, but their efforts were defeated Feb. 7. The execution had been stayed mere hours before this moment, but then the U.S. Supreme Court allowed the state of Alabama to proceed with its order to kill Peter and Theresa’s client.

Together, Peter and Theresa watched as lethal liquid coursed into Domineque’s body. They watched as an armed guard examined every inch of his body, checking for signs of life. And then they watched as the curtain was drawn shut, an unceremonious end to a life.

Meanwhile in Montgomery, co-counsel Josh Tatum sat in his hotel room, waiting. Theresa and Peter weren’t allowed to have their cellphones at the execution, so Josh was left in a blackout period as he awaited word about the end of Domineque’s life.

When he’d heard the execution would proceed that balmy Alabama night, Josh felt paralyzed. Now, alone with his thoughts, Josh could do nothing but think of Domineque and what had brought him — brought all of them — to this point. How had these Indianapolis civil attorneys ended up on a death penalty case in Alabama? How had they come to this heart-wrenching moment of watching their client die?

But even now, not two months since Domineque’s last breath, the Plews Shadley Racher and Braun attorneys say they’re glad — thankful, even — to have had the heartbreaking experience of representing a client on death row. Their grief is raw, but it’s also their inspiration.

The underlying crime that led to Domineque’s death was the Selma rape and murder of 15-year-old Tiffany Harville in 1995. Nearly two years later, Marcus Owden walked into a police station and implicated both himself and Domineque in the crimes.

Domineque maintained his innocence, but a jury still returned a guilty verdict and recommended the death penalty. According to the Plews attorneys, what the jurors didn’t know about Domineque likely made the difference between life and death.

Abandoned with his brother, Europe, in a Chicago warehouse at 4 years old, Domineque spent his life moving from home to home and city to city, living with different family members and suffering multiple abuses at their hands. As an adult, he was diagnosed with schizotypal personality disorder.

But the jury heard nothing of Domineque’s story or mental illness in 1999, and nearly two decades later, the Plews attorneys would use that omission as a basis for their post-conviction relief argument. Hearing a defendant’s life story has been proven to make a difference in capital sentencing decisions, said Robert Dunham, executive director of the Death Penalty Information Project.

Dunham pointed to the life without parole sentence imposed on James Holmes, the perpetrator of the 2012 Aurora, Colorado, movie theater shooting. During Holmes’ sentencing, the defense presented evidence of the defendant’s mental illness.

“Someone who is mentally ill is less morally culpable,” Dunham said. “It doesn’t make the act any less horrible, but it does make the person who committed the act less morally blameworthy.”

Seated at a large wooden table in a spacious conference room, Theresa gets a faraway look in her eyes as she remembers Domineque’s hard-fought PCR proceedings. To her, it was never just about avoiding the death penalty, it was about justice and whether it had been served.

The attorneys don’t pretend Domineque was a saint. None of us are, Theresa says. But, Peter says, it’s also “not at all clear” that Domineque was actually Tiffany’s rapist and killer.

A major issue in the PCR proceedings was the fact that co-defendant Marcus Dowden was schizophrenic. The Plews team presented evidence that the state knew about Dowden’s mental illness and withheld it, but still they were unable to convince state or federal courts to grant relief.

Asked why the court system never ruled in Domineque’s favor, the three attorneys grow quiet, lost in thought. No one can ever truly know what’s in a judge’s mind, but the Plews lawyers have theories.

From Theresa’s perspective, Tiffany’s death was a heinous crime, and the courts wanted justice. Peter says politics are mixed into the fray, noting Alabama’s appellate judges are elected, and those who don’t uphold death penalty sentences could risk defeat.

Josh points to the significant burden defendants — especially those facing death — must meet to obtain relief. Plus, he, Peter and Theresa are civil attorneys from Indiana. They did their best, but the Hoosier attorneys still faced the inherent disadvantage of litigating a criminal case in a foreign jurisdiction.

It’s also not uncommon for civil attorneys to volunteer to represent capital defendants during PCR proceedings, Olson-Gault said. Death row inmates don’t have the right to counsel at that point in the process, but civil attorneys who take a case pro bono can apply their knowledge of civil procedure to the civil nature of PCR proceedings, she said.

Even though capital defendants aren’t entitled to PCR counsel, Olson-Gault emphasized the importance of post-conviction proceedings.

“Whenever we hear that a death row prisoner was wrongfully convicted or improperly sentenced because of intellectual disability or racial bias, that information came out in post-conviction,” she said.

It’s getting late on Feb. 7, and Peter and Theresa are in the back of a police vehicle, sitting alongside Domineque’s imam, waiting to be allowed in the prison. When word that the execution would proceed spread, the trio was instructed to wait at a local service station for a police escort.

Once inside, Peter notices the prison staff are dressed in their Sunday best. The whole scene feels stiff and choreographed, a reality he thinks is meant to detach the state actors from the person whose life they will soon end.

When the curtain opens, Domineque is strapped to a gurney, the lower two-thirds of his body wrapped in sheets. For his final words, he utters the Shahada, the core Islamic creed, in Arabic. His left hand is in a fist, while his right pointer finger is extended. The gesture, the imam says, is meant to symbolize the oneness of Allah in the Islamic faith.

As the lethal injection begins, Theresa closely watches Domineque’s chest, noticing as the rise and fall slows, then stops. Domineque lifts his head once to look at his left arm, then lowers his head and closes his eyes.

Across the state in Montgomery, Josh is in a hotel room, venting his frustrations to his friends via text. He learns the execution is complete when he sees a tweet from the Alabama attorney general. “Tonight,” the statement says, “Ray’s long-delayed appointment with justice is finally met.”

Back home in the historic Delaware Street building that houses the Plews office, Josh flips through a journal he kept during Domineque’s case. The pages record the emotions of the process — the anger he felt when he saw the AG’s tweet; the solace he felt as he drove home in collective grief with Peter and Theresa; the surprise he felt when Domineque’s life came to an end.

None of them expected Domineque to die on Feb. 7. They thought the stay would give them more time. Peter’s parting words to Domineque earlier that day had been, “I’ll see you tomorrow.”

Grief has manifested in unexpected ways. Peter has been avoiding responding to messages expressing condolences. Theresa’s heart hasn’t been in her work. And seated in the conference room, Josh gets lost in his journal, burying his head in the small blue notebook as he re-reads his journey.

But the grief isn’t scaring the attorneys away from hard cases. If anything, the end of Domineque’s life has sparked a new life in their passion for fighting injustice. As they look to what’s next in their careers, Peter, Theresa and Josh have resolved to take cases with a real societal impact.

Was Domineque’s case heartbreaking? Yes. But was the heartbreak worth it?

“I wouldn’t have missed it,” Theresa declares.•