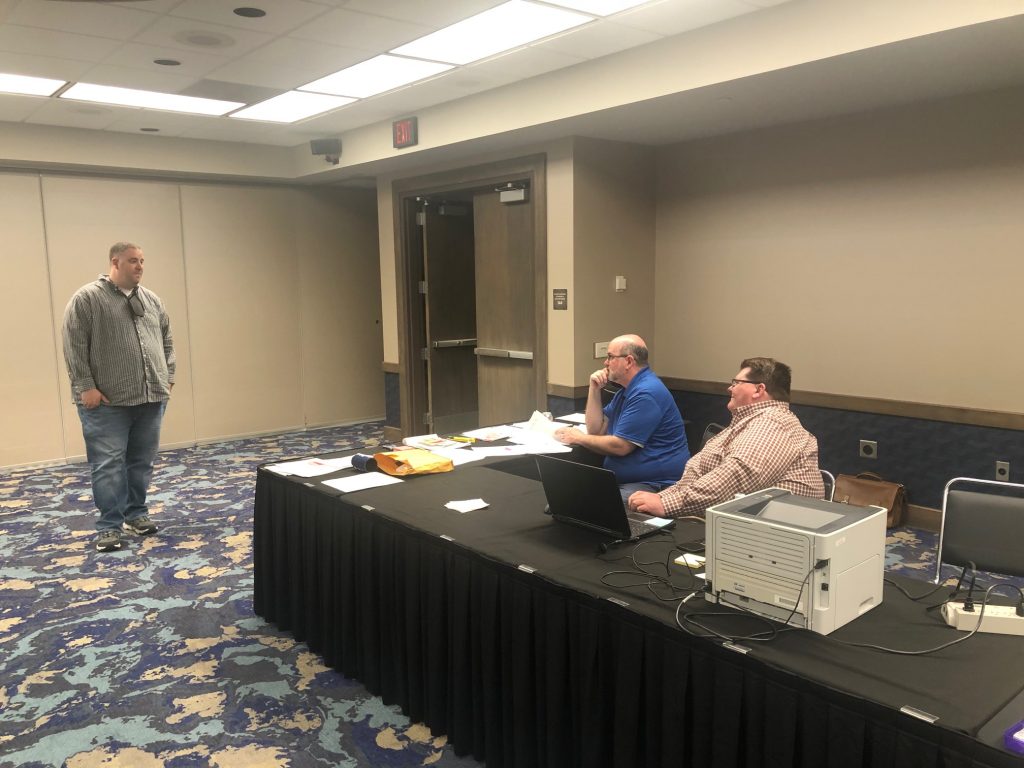 The event is being run from one of the large conference rooms of the Old National Events Plaza in downtown Evansville.

The 2021 National High School Mock Trial Championship has moved to a virtual platform because of COVID-19, but Evansville is still the host city and organizers are upbeat and working to make the event memorable for the students from around the country who will be participating by Zoom.

“We’re thrilled we’re able to host and to introduce our fine community to the students,” said Scott Wylie. “While it’s all virtual, I think folks are absolutely thrilled to be part of it.”

Wylie, executive director of Pro Bono Indiana and an Evansville native, was a key player in persuading the national championship to hold the event in the southern Indiana city. The Indiana Bar Foundation has taken the lead in coordinating and overseeing the details of the courtroom competition, which runs through Saturday.

Bar foundation Executive Director Charles Dunlap and his staff arrived in Evansville Tuesday and set up operations in one of the large conference rooms of the Old National Events Plaza downtown. Teams from Carmel High School and Trinity School at Greenlawn in South Bend, which placed first and second, respectively, in the 2021 Indiana High School Mock Trial Championship, will be among the 46 teams competing for the national competition.

With COVID-19 still posing a danger, the mock trial championship board decided to make the 2021 event virtual. Students and the 236 volunteer judges staying in their home states and are logging onto the competition through the internet rather than spending time in Evansville.

“We had to learn a lot about this stuff just because of the state high school mock trial and We the People competitions,” Dunlap said of conducting the competition virtually. “So by now we’re pretty proficient.”

In the Old National conference room, the bar foundation has four computers that have been dubbed courthouses. Within each “courthouse,” breakout rooms will serve as courtrooms for the virtual mock trials.

Students will compete in two rounds Thursday. Another round will be Friday, followed by the final round and championship on Saturday. Judge Richard Young of the Southern Indiana District Court will preside over the championship trial while Justice Steven David, retired Chief Justice Randall Shepard and Court of Appeals Judge Melissa May along with Vanderburgh Superior Court Judge Leslie Shively and Juvenile Division Referee Beverly Corn will serve as scoring judges.

The event will end with the awards ceremony in Saturday evening, which will include pre-recorded remarks from an unnamed special guest.

“As long as we have an internet connection that’s stable and good, the competition can go on,” Dunlap said.

Even though the excitement that comes from being in-person will be missing, Dunlap and Wylie are upbeat.

Evansville was to host the national championship in 2020. But the coronavirus crisis abruptly interrupted the enthusiasm and preparations, leading to its cancellation.

Evansville appeared to have lost its chance to hold the competition until the next cities in line to host, Kalamazoo, Michigan, and Little Rock, Arkansas, agreed to adjust their schedules so that Indiana would host in 2021

Wylie is grateful to Kalamazoo and Little Rock. He said those cities’ willingness to step back a year was an example of the many kindnesses he has seen throughout the pandemic.

To help students connect with their peers across the United States, the bar foundation hosted a virtual welcoming reception Wednesday evening.

Lt. Gov. Suzanne Crouch greeted the participants in a pre-recorded message and, courtesy of the bar foundation staff boxing and mailing the tokens, the student competitors were able to have the traditional pin exchange that starts every national championship. Then the students were randomly grouped into teams and competed in a trivia contest.

“I’m extremely confident we’ll have a good week here” Dunlap said. “It will be great.”