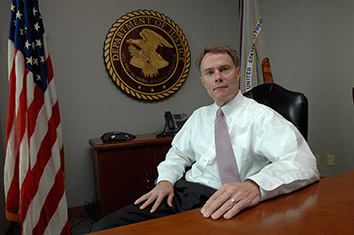 As a crowd of more than 100 listened, Hogsett touted his administration’s track record, mentioned future work on Circle Centre Mall and the Indiana Convention Center, and said he’s yet to accomplish his goals.

Hogsett, 66, said he intends to make the Indianapolis Metropolitan Police Department one of the “best-paid, best-trained, best-equipped police departments in the entire country,” address the root causes of violence, fix the state’s road-funding gap, make transit safer, and ensure the Indianapolis economy is a “rising tide that lifts up every neighborhood” without displacing residents.

Those goals were derailed by the pandemic, he said. If he is elected for another four-year term, he said, they would be within reach.

His opponent in the Democratic primary, State Rep. Robin Shackleford, said Hogsett already had plenty of time to accomplish his goals.

“I think eight years has been long enough to prove what he can do for our city,” Shackleford told IBJ. “It’s just time for a new perspective, a new solution.”

Hogsett previously expressed support for term limits. In 2015, he said “Eight years is long enough to accomplish what you want to accomplish,” according to WFYI.

Some of his priorities are similar to Shackleford’s. At her announcement Thursday, she said she would prioritize addressing root causes of crime, fixing the $1 billion road-funding gap, increasing affordable housing, decreasing the achievement gap, eradicating food deserts and promoting an inclusive Indianapolis.

She told IBJ on Tuesday that the difference would be her clean-slate perspective. Unlike Hogsett, who is carrying on priorities from past terms, she said she is starting anew and will be going to every corner of the city to talk to residents and find actionable items to address needs.

“I think we probably agree on those main issues that are crippling our city, but I think we differ on how we get to those solutions and what those solutions are,” said Shackleford, who hopes to become the city’s first Black and first female mayor.

Shackleford said she couldn’t discuss specific policies yet, but that they would be released prior to her officially filing her candidacy in January.

No mayoral candidates have yet surfaced on the Republican side, but Marion County Republican Party Chair Joe Elsener released a statement Tuesday that found agreement with Shackleford’s criticism of Hogsett.

“Even Democrat Rep. Robin Shackleford described Joe Hogsett’s Indianapolis as a city with “… pothole-ridden streets where residents struggle to get enough to eat and worry that at any moment a stray bullet will travel through their wall and strike their child,’” the statement said.

Elsener told IBJ on Friday that Shackleford’s campaign-launch speech was proof that people on both sides of the aisle are unhappy.

During Tuesday night’s event, Hogsett mentioned several mixed-used redevelopment projects that have been supported or spearheaded by his administration, including Indianapolis City Market, Elevator Hill and the Cole Motor Redevelopment off of East Market Street.

“Where we are gathered tonight will soon be the most intensive residential district in the entire state,” Hogsett said.

Hogsett said there are additional projects on the horizon, including a partnership with state officials for a long-awaited redevelopment of Circle Centre. Also on the agenda, he said, are redevelopments of the Indianapolis Downtown Heliport, the downtown jail (Jail 1), the Old City Hall parking lot and the expansion of the Indiana Convention Center.