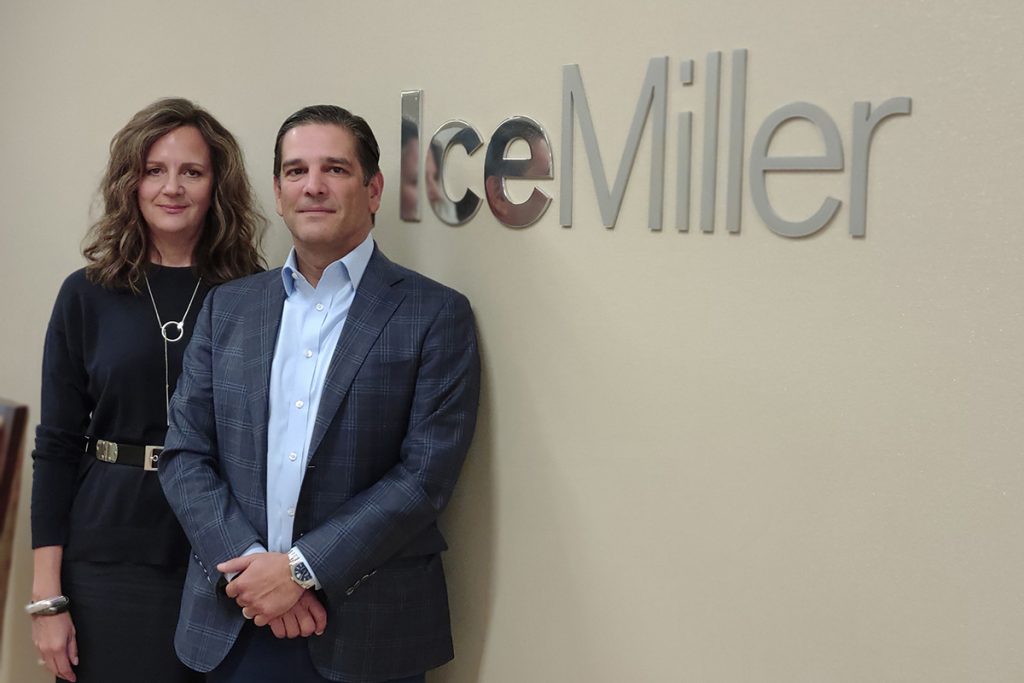 Just back from a trip to Washington, D.C., where he welcomed politicians and other guests to Ice Miller’s new office during an evening reception, Michael Millikan looked out the window from the 29th floor conference room in Indianapolis and remarked that he could no longer see all the firm’s competitors.

The high-rise buildings that are home to other large and midsize law offices in the downtown area were clearly visible against the gray morning sky, but in the heated battle for top talent, firms out of view on the East and West coasts have been courting and luring lawyers in all markets, including Ice Miller’s.

Currently, Millikan said, the out-of-town firms are enticing prospects with “huge signing bonuses” and the promise that the new hires will be able to stay in their communities and work from their homes without ever needing to go into the office. He said he thinks the situation will reverse itself because lawyers will miss the camaraderie of working in the same space with their colleagues, and eventually the demand for legal services will cool so those remote attorneys will be pink slipped first.

Even so, keeping their firm attractive to new associates and lateral hires is among the top priorities for Millikan and his colleague Rebecca Seamands as they prepare to step into the chief managing and deputy managing partner positions, respectively, Jan. 1. Their plan to recruit and retain attorneys and to grow their firm will use the method the legal profession has long relied on and, in fact, was enlisted during the event in Washington — relationship building.

“If we have people that may come to the firm and don’t necessarily plan to stay here their entire career, our job is to convince them otherwise and to establish the relationships with the people that they work with,” Seamands said. “I think that’s the thing that’s going to cause people to stay is, if they feel like these are people (they) want to spend (their) career with, (they’ve) developed friendships, (their) families know each other. And, frankly, that’s the reason that I’ve stayed.”

At an initial glance, Millikan and Seamands would seem to be a bit out of step during this era when attorneys jump from firm to firm.

Both joined Ice Miller at the start of their careers in private practice and built their practices there. Millikan leads the business group, focusing on private equity, venture capital and mergers and acquisitions, while Seamands is a partner in the construction practice.

The incoming leaders also took a breather before enrolling in the J.D. program at Indiana University Robert H. McKinney School of Law.

Millikan completed a bachelor’s degree in history at Villanova University and then headed to Japan, where he taught conversational English for a year. Afterward, he meandered through Southeast Asia and Europe before returning to his Indianapolis home and beginning his legal studies.

He has been mentored and nudged to take a leadership role by the firm’s current chief managing partner, Steve Humke. Millikan intends to be “very externally focused” by continuing the firm’s recent growth spurt with new offices in its existing locations of Washington, D.C., Philadelphia and Chicago, and by deepening its bench of talent.

“I think the firm is poised,” Millikan said. “We’ve come out of this and we’re poised for growth to be able to serve our clients.”

Seamands said she sees herself and Millikan as complementing each other. While he focuses on the big picture, she is detail-oriented and ready to deal with the day-to-day issues. She holds a degree in business administration from the University of Illinois and worked for a couple of years in sales before deciding to get a law degree.

Once she landed at Ice Miller after clerking for the late Judge Robert Staton of the Court of Appeals of Indiana, she served on the firm’s personnel, mentoring and training committees and is now on the board of directors. That has given her the opportunity to see the different aspects of the programs and initiatives put in place to hire, train and retain attorneys and staff.

“We have to maintain our competitive edge as it relates to compensation,” Seamands said “but I think beyond compensation, we recognize that the way to hopefully attract and retain the people that we really value is to enhance that sense of community and give people reasons to feel like they belong here.”

Millikan said he believes Ice Miller, which has seven locations and more than 340 attorneys, will remain successful by continuing to serve its core clients who are in the middle and lower-middle markets. He explained that as some firms are trying to develop business in the larger markets, those partners are struggling to keep the long-time clients from being priced out by the higher rates.

“That’s been another great selling point for us,” Millikan said. “It’s something that we look to expand; we’re not moving away from our core client demographic. I think we can really continue to build our presence in that space.”

One headwind Ice Miller may be facing is a whistleblower lawsuit filed by the former chief deputy and general counsel in the Office of the Indiana Treasurer. The firm is accused of being illegally paid $168,377 between 2015 and 2019. Millikan and Seamands said they could not comment on the litigation.

Ice Miller brought its workforce back to its office Nov. 8 and instituted a flexible schedule to give team members the option of working from home two days each week. Seamands acknowledged that people are wary from the pandemic, but she said she also senses optimism.