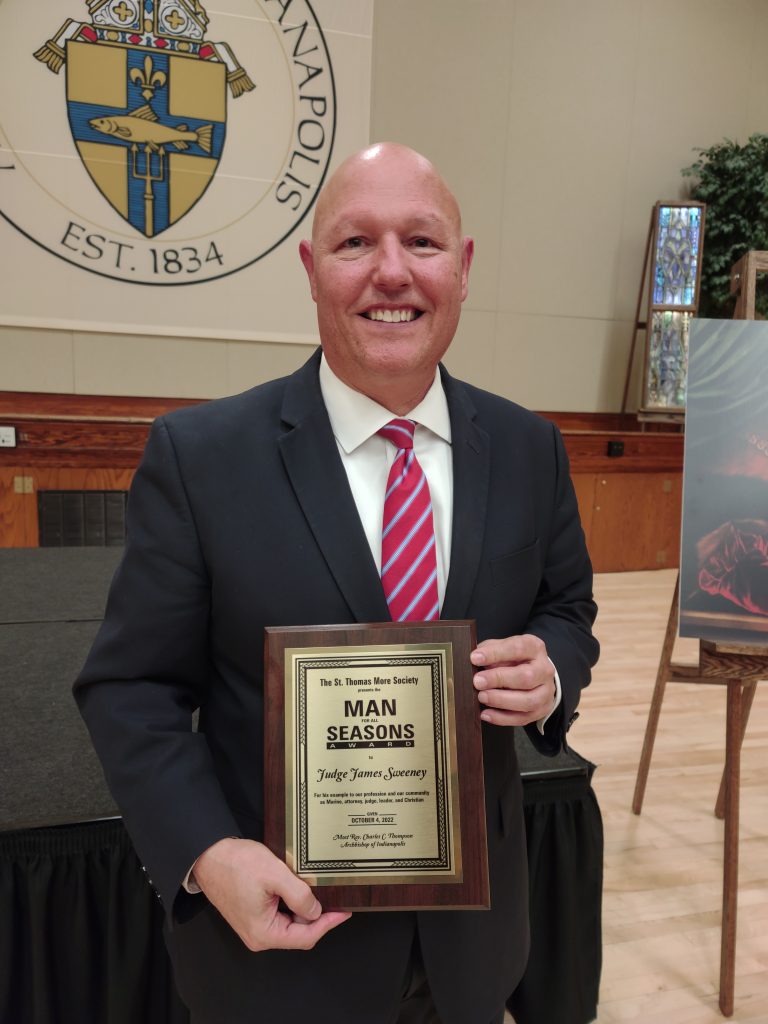 The 2022 Red Mass hosted Tuesday by the St. Thomas More Society of Central Indiana was a mix of joy and sadness as members of the legal profession came together to celebrate the accomplishments of a well-respected colleague and say goodbye to a longtime friend.

Marion Superior Judge Dave Certo, president of central Indiana’s St. Thomas More Society, thanked the attendees for “making time to celebrate, to catch our breaths.” During the evening event, which started with a mass at the Cathedral of Saints Peter and Paul in Indianapolis, the society honored Indiana Southern District Court Judge James Sweeney with the 2022 “Man for All Seasons” award and remembered retired Monroe Circuit Judge Marc Kellams, who died in a car accident in July.

Certo said the Red Mass allows lawyers and judges to reflect and ask for God’s help. Nodding to the demands that legal professionals have on their time and the heavy responsibility that comes with their jobs, the criminal court judge talked about the rule of law and the importance of reinforcing that boundary.

Archbishop Charles Thompson also focused on the rule of law during his homily at the mass. Thompson led the service with the assistance of nearly 10 other priests including the Rev. Tim Wyciskalla, chaplain for the St. Thomas More Society.

For the mass, the clergy wore red robes and the altar was adorned with a red cloth.

Thompson pointed out the Red Mass was held on the same day as the Feast of St. Francis of Assisi and noted the Catholic saint embraced the rule of law for the sake of serving others.

Yet, the archbishop told the congregation that the legal system is limited in what it can do, so the foundation must be prayer.

“Prayer has the power to transform and do what the law can’t do,” Thompson said. “God will pick up our slack.”

Following the mass, the crowd made its way across Meridian Street to the Catholic Center Assembly Hall for dinner and fellowship. The group filled 20 tables and included family members of Sweeney and Kellams.

Greenwood attorney David Henn remembered his friend and former deacon classmate Kellams, describing him as a “gracious and engaging jurist.” Kellams served on the bench and taught at Indiana University Maurer School of Law for decades, and when he retired, he led the Indianapolis Archdiocese’s prison ministry.

Henn recalled Kellams’ keynote address to the St. Thomas More Society in 2007. Then, Kellams discussed the weight that comes with wearing a judicial robe and how being at the Red Mass reminded him “there must be something greater than himself” that enabled him to do his job as a judge.

“We have all been blessed with a great gift that has been and continues to be Judge and Deacon Marc Kellams,” Henn said. “… Let us remember, Mark Kellams conducted himself with great faith as he served the people of our community, and let us pledge ourselves to faithfully serve that same community in the pursuit of justice and peace and goodwill for all.”

Nancy Gargula introduced Sweeney and told the attendees they would have to pitch a tent and remain there all night if she listed all his accomplishments.

Sweeney clerked for Judge John Tinder in the Indiana Southern District Court and Judge James Ryan of the 6th Circuit Court of Appeals. He then joined Barnes & Thornburg and was confirmed as a federal district court judge in 2018.

In recounting his journey in the Catholic faith, Sweeney highlighted the sacrament of confession as comforting him during pivotal times in his life.

His first confession as a 7-year-old began with him confessing that he had not made his bed. Later, he sought absolution just before the launch of Desert Storm and as he became a federal judge.

From his 80-year-old grandmother, Sweeney said he learned a good confession is not about confessing sins. Rather, it is about the act of self-examination and contrition in seeking God’s grace.

“As best we can, we are called to do the right thing in the right way, to make our beds, to fairly, impartially and diligently perform our duties with patience, dignity, respect and courtesy to all … in short, following the example of St. Thomas More,” Sweeney said. “Though failure may come from time to time, I now confess to the comfort and strength that I’ve taken from the Red Mass through the years — the homilies, the commentaries from the archbishop which are right on the mark, as well as the prayers and encouragement of all the clergy on behalf of the bench and bar which are so welcomed and needed.”