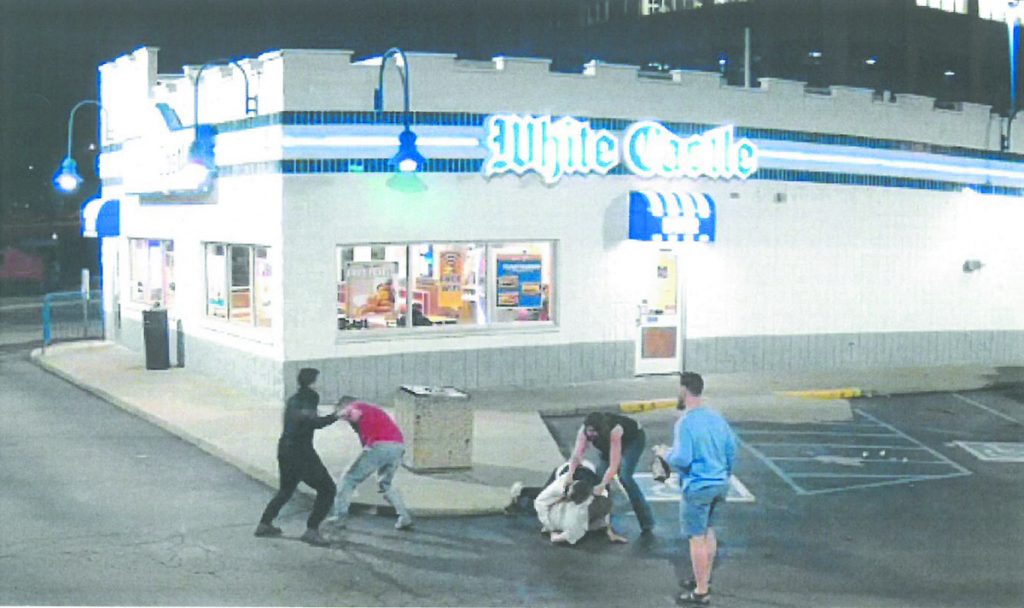 Did Brandon Kaiser pull the trigger on two Indiana judges only after they attacked him and placed him in fear for his life? He claims in court filings they did. But even as the judges involved in the now-infamous brawl have retaken the bench after brief suspensions, video that could prove conclusive remains under a court seal.

Kaiser is accused of shooting two southern Indiana judges last May in downtown Indianapolis. In a Feb. 25 court filing, he claims self-defense. He alleges Clark Circuit Judges Andrew Adams and Bradley Jacobs assaulted him, body-slammed him onto a concrete parking lot, beat him and kicked him in the head as he and his nephew, Alfredo Vazquez, were stopping at White Castle for some early-morning sliders on May 1, 2019.

Surveillance video of the restaurant parking lot on South Street shows what happened leading up to the fight, but it has not been made public. Further, it’s unclear whether even jurors might see the video if alleged gunman Brandon Kaiser goes to trial, which is scheduled to begin in Marion Superior Court on March 16. Also unclear is whether the judges who participated in or witnessed the assault — Adams, Jacobs, Crawford Circuit Judge Sabrina Bell and Clark Circuit Magistrate Judge William Dawkins — might be placed in the difficult position of having to testify under oath as sitting judicial officers if called to testify in Kaiser’s criminal trial.

Kaiser faces 14 charges — including four felony counts of aggravated battery — in connection with the shootings of Adams and Jacobs, who were in town for a judicial conference. Both men were seriously injured — Jacobs initially critically — and they recovered after several days in the hospital.

Kaiser’s filing implies the judges, who were outside the White Castle after being too late to get into the Red Garter after a night of bar-hopping before the conference began in a few hours, were the aggressors.

Kaiser’s self-defense notice says he “did not provoke, instigate, or participate willingly in the violence of his assault and did not make physical contact with his attackers until it was necessary in order to protect himself. … The Defendant was justiﬁed in using reasonable force to protect himself because he was attacked by two men with military training while he was attempting to enter a fast food restaurant.”

Adams, Bell and Jacobs did not respond to emails seeking comment from them or their attorneys regarding whether they expect to be called as witnesses in Kaiser’s case and seeking a response to his claim of self-defense. Indianapolis attorney James Voyles, who represented Adams and Jacobs in their judicial discipline cases, confirmed that he continues to represent Adams, but he customarily declined to talk about cases.

Adams, Jacobs and Bell all received agreed discipline in rapid fashion from the Indiana Supreme Court. One month after the Judicial Qualifications Commission filed notice of formal charges against all three judges, the Indiana Supreme Court agreed to suspend each of them for one to two months without pay. They all have since returned to the bench.

According to the court, the entire episode began as Vazquez and Kaiser “drove past the group and shouted something out the window.” Bell then gave Vazquez and Kaiser the finger, the court says, and Vazquez and Kaiser then “pulled into the White Castle parking lot and exited the vehicle. Judge Bell, who was intoxicated, has no memory of the incident but concedes that the security camera video shows her making this gesture.

“A heated verbal altercation ensued, with all participants yelling, using profanity, and making dismissive, mocking, or insolent gestures toward the other group. At no time did (Adams, Jacobs or Bell) move to another location in the parking lot to avoid a confrontation or de-escalate the conflict,” the judges’ discipline order says.

Indiana Lawyer has made multiple appeals as a matter of significant public interest for the public release of surveillance video. Both the Indiana Supreme Court and the Marion County Prosecutor’s Office declined to release it at IL deadline.

But several still photos Kaiser provides with his self-defense motion for the first time shed light on some of what’s in the video. They suggest a longer, more vicious attack against Kaiser than detailed by the Supreme Court.

One photo purports to show Kaiser being lifted off the ground by the larger Jacobs before Jacobs allegedly slams Kaiser to the concrete parking lot surface.

Another photo shows Bell attempting to pull Jacobs off Kaiser.

Another purports to show Adams with his leg reared back before Kaiser says the judge kicked him in the head as Kaiser is being held down on the ground by Jacobs.

In some of the photos, Clark Magistrate Judge Dawkins can be seen in the parking lot on the periphery of the skirmishes. In the Supreme Court’s discipline order, Dawkins is only placed inside the restaurant while the fight is taking place.

Kaiser, the filing says, “repeatedly tried to escape his attacker’s hold, but the force used against him was too strong. Judge Sabrina Bell, who was there with the other two Judges, attempted at least two separate times to get Judge Jacobs off of the Defendant.”

The last exhibit from the video stills purports to show a closeup of Kaiser’s severely bloodied and bruised left eye. The notice says Kaiser suffered severe injuries to his face and body as a result of the assault.

Video to be released … later

Indiana Supreme Court spokeswoman Kathryn Dolan declined to say whether justices or members of the Judicial Qualifications Commission viewed the video. Nor did she disclose whether Chief Justice Loretta Rush, who chairs the JQC, had viewed the video. Dolan cited confidentiality rules governing judicial disciplinary deliberations, and she said the court would have no comment on Kaiser’s ongoing criminal case.

“Confidentiality rules exist to ensure the integrity of the investigation and to maintain due process rights of the participants. When the criminal matter is resolved, the Chief Justice intends to direct the Judicial Qualifications Commission to release the video,” Dolan said in an email responding to IL questions. “In the meantime, the focus remains on assuring that the proper administration of justice is being safeguarded.”

“The court has ordered a protective order and our office will abide by that order,” Leffler said in an email. “Additionally, this is a pending criminal case and the video will not released by our office at this time per IC 5-14-3-5.2(a)(2)(B) as it is likely to interfere with the ability of a person to receive a fair trial.”

But it was the prosecutor’s office that sought the protective order on the video, and which could request that order be lifted. Leffler, however, said the office would not do that before Kaiser’s criminal case concludes, even after Kaiser has asserted a self-defense claim that may be bolstered by the evidence.

“Should this case proceed to trial,” Leffler said in a subsequent email, “the video may be considered evidence which is made part of the public record.”

In the meantime, a source not connected to Kaiser’s case who has seen the video and is familiar with the events it depicts spoke to Indiana Lawyer on condition of anonymity.

The source said the words shouted from Kaiser and Vazquez’s passing vehicle were innocuous “comments with sexual innuendo,” such as “get a room” or words to that effect.

The source said Kaiser and Vazquez witnessed the intoxicated judges Adams, Bell and Jacobs outside the White Castle, engaging in what he described as “dirty dancing.” According to the source, before the altercation began, Adams can be seen on the video seen cavorting with Bell with his shirt raised.•