An Indiana company that ordered more than 700,000 boxes of medical gloves during the worst of the COVID-19 pandemic won a multimillion-dollar verdict in December against the supplier that failed to deliver, but the supplier’s general counsel — maintaining the company was duped by the distributor — claimed, “Everyone was a victim here.”

Illumination International, based in Lafayette, was awarded $4.38 million against Vannin Healthcare Global after a two-day trial in Marion Commercial Court. The jury found VHG had breached the contract to deliver 705,600 boxes of nitrile gloves.

I Yang Li president and CEO of Illumination, and his attorney, Anthony Dowell of Gutwein Law in Lafayette, alleged VHG scammed the Indiana company and diverted the initial down payment for the gloves for personal use. In a press release announcing the trial court victory, Dowell stated collecting on the judgment would be a challenge, but he vowed, “We won’t quit until we get the money.”

Samuel Nunberg, who serves as general counsel for VHG, rebutted the plaintiff’s allegations that Vannin was running a scheme.

He told Indiana Lawyer that the distributor in Vietnam provided “false documents” indicating it was certified to supply the gloves and had the product ready to ship. Vannin sent 70% of Illumination’s initial payment to the distribution company but never received the gloves.

Nunberg said VHG, which is based on the Isle of Man in the Irish Sea, is pursuing legal action against the distributor.

“We were defrauded on our side by the supplier,” Nunberg said. “We were provided false documents. The monies were never returned.”

Delk McNally LLP served as local counsel for the defendants. The attorneys forwarded a request for comment to Nunberg.

Despite the verdict, the Indiana case may not be over. Nunberg said VHG is exploring further action, while Dowell said the plaintiff’s side is considering a motion for sanctions on the “baseless” tortious interference claims the defendants filed during the litigation.

‘Everything in my power’

Illumination’s business relationship with VHG began in November 2020, when the two businesses entered into an agreement for the gloves. According to the amended complaint — Illumination International LLC v. Vannin Healthcare Global Ltd., et al., 49D01-2103-PL-009067 — the agreement set the terms for the supply of “high-end premium nitrile examination non-sterile medical gloves” manufactured by VGlove Vietnam. The total price of $5.53 million.

Li told Indiana Lawyer the gloves were for a longtime customers he declined to name, but said they were “one of the largest dental veterinarian groups in the country.” In the past, the client had procured only masks from Illumination, but when it asked for gloves, Li relied on the advice of his friend and connected with Vannin.

The agreement required Illumination to pay 50% of the total price in advance and 50% within two business days after the gloves were delivered. After the Hoosier business made the initial payment of $2.77 million in mid-November, VHG had 40 days to deliver the gloves.

Illumination claimed in the amended complaint that VHG’s Oliver Van Veen showed Li a contract that indicated Vannin would be purchasing the gloves through the Vietnamese distributor Kotinochi. But, the court document asserted, that contract was “falsified and fake.”

Moreover, Illumination alleged in the complaint that VHG represented itself as a distributor for INTCO, a “supplier of high quality gloves.” The complaint included a link to INTCO’s “Fraud Alert” website, time-stamped March 10, 2022, that lists Vannin Healthcare Global as a “(s)uspect of counterfeiting INTCO customer.”

Li said he filed the lawsuit in March 2021 so he can return his customer’s money and repair his reputation. With his client currently not doing business with Illumination, he said he wants to show them he did “everything in my power” to cover the loss.

“Even when we were talking settlement, I told them straight up, ‘I don’t care about the liquidated damages or anything else,’” Li said of negotiations with VHG. “I just want my money, not a cent less and not a cent more.” 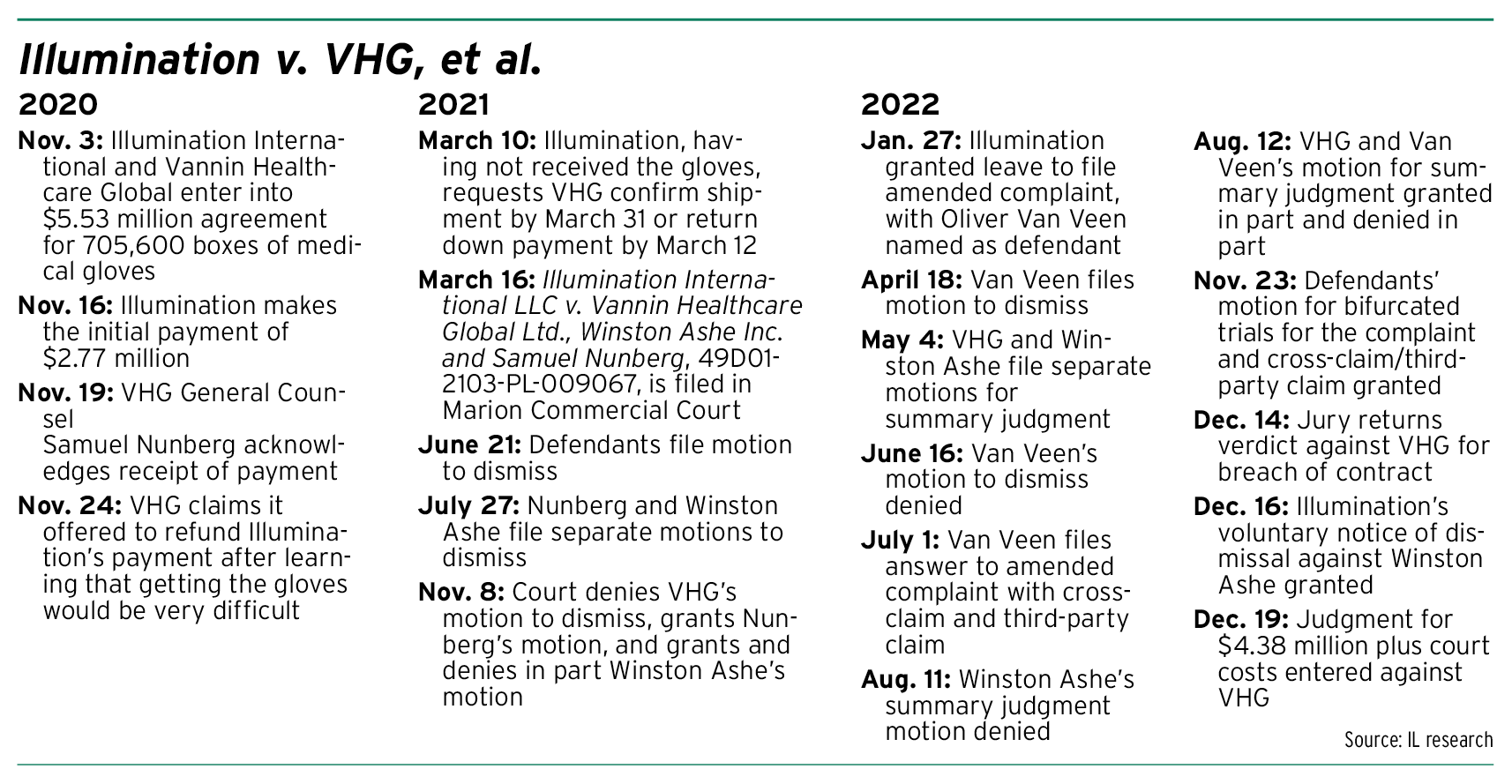 Nunberg emphasized the Marion County jury found in favor of the defendants on Illumination’s claim for fraud.

“We never committed fraud. He did not commit fraud,” Nunberg said. “Mr. Van Veen nor Vannin Healthcare Global does not run schemes as Mr. Li stated in his press release, and I would also remind him to be very careful of his public statements.”

In its motion for summary judgment, VHG disputed the allegation of fraud. The supplier claimed Illumination wanted the gloves manufactured by VGlove. Nowhere in the agreement does VHG represent itself as having a direct relationship with the glovemaker, but rather as having a relationship with Kotinochi, who was believed to be a direct distributor for VGlove.

The summary judgment motion stated that when the agreement was executed, the parties knew the market for all COVID-related personal protective equipment was “going crazy, and prices were rising faster than orders could be filled.” Illumination delayed wiring the down payment, and by the time the money arrived, the price for the gloves had increased — all of which was “outside of Vannin’s reasonable control.”

During the litigation, Van Veen filed a counterclaim against Illumination and Li. He alleged the Indiana company and its owner interfered with his business relationships by encouraging his local representative to sever ties with him and convince his customers to cut their ties.

Marion Superior Judge Heather Welch granted the defendants’ motion to bifurcate the trial so Van Veen and VHG could present the counterclaim. Nunberg said after the verdicts were returned on Illumination’s claims, the defendants decided to forgo presenting the cross-claim to the jury.

However, he acknowledged the counterclaim could be revived and an appeal could be filed.

“We appreciate the jury’s long deliberation,” Nunberg said. “And while we don’t agree with the verdict, as I said, we’re exploring potential further action.”

Nunberg was named as a defendant in the original complaint. Illumination argued VHG’s general counsel was a party because he stated he “was liable for all monies and transactions” out of the Winston Ashe Inc. bank account, where the down payment was wired. In addition, when the money was deposited, Nunberg acknowledged receipt.

Welch granted Nunberg’s motion for dismissal, finding the Indiana court did not have jurisdiction over the out-of-state attorney, in part because he was not a party to the agreement between VHG and Illumination. Nunberg said naming him as a defendant was “completely frivolous.”

Illumination acknowledged Vannin did deliver about 11,200 boxes of gloves — although, according to the amended complaint, they were not made by VGlove. Also, Li said, at one point, he and VHG had reached a settlement agreement.

Vannin made a similar claim in its summary judgment motion. The supplier stated it offered to refund the $2.77 million several times, but Illumination continually rejected the overture. Li countered that he told VHG he would sign the agreement only when he had the cashier’s check for the initial sum in hand. The defendant did not respond, he said, and the agreement was not signed.

“We had a feeling that they’re going to play games, but we were hopeful that they would come to their senses and just give us our money back” Li said. “We don’t want anything else. We just want our money back.”•