Home » Marion Superior retention interviews to be held in March 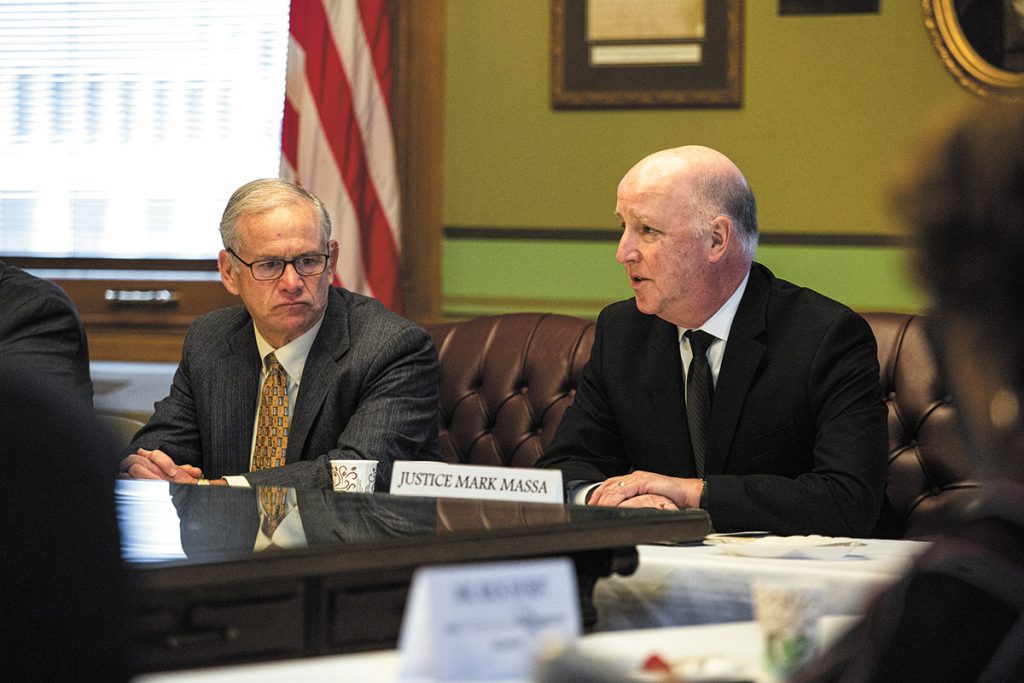 The second iteration of retention interviews for Marion County judges will begin in less than a month.

In a Feb. 12 meeting, members of the Marion County Judicial Selection Committee set aside March 9 to interview the 13 Marion Superior Court judges seeking retention. Those judges are:

The 13 judges have each filed with the committee, the Marion County Clerk’s Office and the Indiana Secretary of State’s Office notice of their intent to place their names on the November 2020 retention ballot. The 14-member Judicial Selection Committee will interview the judges and make a public recommendation as to whether the jurists should be retained.

The Marion County Judicial Selection Committee was created in 2017 through legislation that moved the Indianapolis courts to a merit-based selection system for the Superior Courts. The county’s Circuit Judge, currently Sheryl Lynch, remains an elected position.

As was done in 2018 — when 17 judges sat for the first-ever Marion County retention interviews — the judges will participate in 20-minute interviews with committee members. Members expect to complete all interviews on March 9, but they are leaving open the morning of March 10 to continue their executive session discussion, if necessary.

After meeting in executive session to discuss the candidates and their qualifications, the committee will publicly vote on its retention recommendation for each judge. In 2018, all 17 judges were recommended for retention.

Then in May, the Judicial Selection Committee will reconvene to interview applicants to fill three upcoming vacancies on the Marion Superior Court.

Judges Barbara Cook Crawford, David Dreyer and Marilyn Moores each declined to seek retention in 2020. Dreyer announced his upcoming plans to step down from the bench last summer, while Crawford and Moores’ pending retirement came to light when they did not file for retention by the Feb. 7 deadline.

The Judicial Selection Committee will interview applicants to succeed those three jurist May 18-20. Members will select three finalists for each position, for a total of nine finalists, and send those names to Republican Gov. Eric Holcomb, who will make the final selection.

Committee attorney Jim Maguire reviewed the qualifications members should look for in applicants, including legal experience, public service and potential judicial temperament, among other factors. But politics are also at play, with the political parties of the candidates necessarily factoring into the committee’s recommendations.

Per statute, no more than half of the 36 judges of the Marion Superior Court can be from the same party. Moores is a Republican while Crawford and Dreyer are Democrats, so the committee will be tasked with making recommendations for successors who would maintain partisan balance.

That year, judges Thomas Carroll, Michael Keele and Becky Pierson-Treacy chose not to seek retention. Carroll and Pierson-Treacy were Democrats and Keele a Republican.

Of the nine finalists recommended to fill the 2018 vacancies, Charnette Garner, Jennifer Harrison and Mark Jones were chosen by Holcomb to join the Marion Superior Court bench. Massa said those appointments were a credit to the work of the committee and to Holcomb.

Committee members agreed to set aside three days for interviews in May to allow time to speak with a significant number of applicants. Though the committee has discretion not to interview all applicants for the Superior Court vacancies, it chose in 2018 to meet with all 40 candidates.

Committee member Lacy Johnson, a partner at Ice Miller LLP, said doing so helped boost public confidence in the merit-selection process by giving all interested applicants a chance to make their case. When the committee was created, it was met with significant skepticism, particularly among advocates for race and gender diversity.

“I think the reason that some of the kudos we got was because of the process we ran, and that everyone in the community that was anxious about this new system felt good that everyone that had an interest got a shot,” Johnson told fellow committee members.

“I think for our broader community, it would be well-served to spend the time interviewing anybody that has expressed an interest.”

Other members agreed with Johnson, though the committee retains its discretion not to interview all applicants come May.

Official notice of the call for applicants was posted Feb. 14. Massa received notice of the three vacancies Feb. 11, and the committee is required by law to post the announcement within seven days. Candidates interested in filling the vacancies have 45 days from Feb. 14 to apply.

The makeup of the Judicial Selection Committee has changed slightly since it began its work in 2018.

In addition to Massa, the committee is led by vice chair Cale Bradford, chief judge of the Indiana Court of Appeals. Other members include:

“I look forward to another several months of a good working relationship as we continue to ensure the quality of the Marion Superior Court going forward,” Massa told the committee Feb. 12.

In addition to Marion County, Allen, Lake and St. Joseph counties also use judicial-selection panels. The process used for the county courts — recommending finalists to the governor, who has the final say — tracks the process the Judicial Nominating Commission follows to fill vacancies on Indiana’s appellate bench.

The Judicial Nominating Commission is once again active as it begins accepting applications for a successor to Indiana Court of Appeals Judge John Baker, who will retire July 31. Those applications are due March 16.

And in Allen County, the Allen Superior Court Nominating Commission is likewise accepting applications to fill the vacancy that will open when Judge Nancy Eshcoff Boyer retires effective June 15. Those applications are due March 10, and the nominating commission will meet April 8 and 9 in Fort Wayne to interview candidates.•