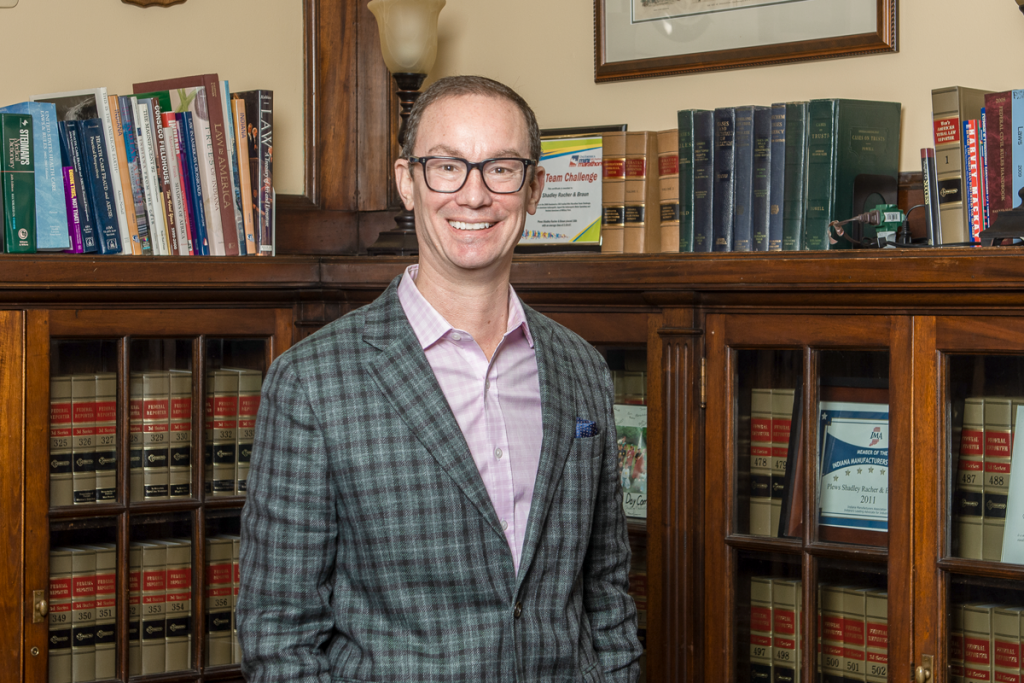 Greg Gotwald is not looking to merge Plews Shadley Racher & Braun with another firm, saying, “We like our culture too much.” (IL Photo/Chad Williams)

Having so often set long-term plans only to abruptly change direction when the goal is reached, Gregory Gotwald has reduced this trait to the shorthand description of “right turn.”

For example, Gotwald enrolled in the Rose-Hulman Institute of Technology, intent on following his older brother into the field of environmental engineering. But he made a right turn and decided to become an environmental lawyer.

Then, after a summer at the Department of Justice and toying with starting his career in some place like Washington, D.C., or New York, he decided to return to Indiana and join Plews Shadley Racher & Braun.

Gotwald said he expected he would focus on environmental compliance counseling, but he immediately started doing litigation and quickly figured out that he really liked it. Since then, his practice has shifted to insurance coverage and litigation.

Calmly recounting the right turns his career has taken, Gotwald concluded, “I couldn’t be happier.”

The ability to assess and make a turn will likely be valuable as the 44-year-old takes on the challenge of leading his firm.

Gotwald has been named the managing partner at Plews Shadley and is the sixth attorney to take over an Indianapolis-based firm in 2022. Hall Render Killian Heath & Lyman, Ice Miller, Church Church Hittle & Antrim and Barnes & Thornburg are also welcoming new firm leaders.

Like the others in this new class of leaders, Gotwald has only worked for the firm he is now leading, and he is taking over when the world is lurching toward normalcy but times are still uncertain. Law firms around the country are trying to find the balance between remote and in-person work while hunting for more talent to handle an unexpectedly heavier volume of work.

Yet Gotwald said he is sure his firm will weather the changes just fine.

“One of the things that’s nice and, I think, ideal about a firm of our size is that we can be pretty nimble,” he said. “… That allows us to react to the market and market conditions a lot more quickly and is an advantage we feel we have because we can set our goals … but we’re constantly assessing, ‘Where are we? Are we good? Do we need to make that right turn, do we need to just veer, do we need to make a U-turn and go back?’”

Plews Shadley is a boutique law firm with 38 attorneys and concentrations in environmental and insurance law. Founded in 1988, the firm eschewed the downtown high-rises and planted its footprint in the old northside neighborhood of Indianapolis, where it remains spread between a couple of mansions and a two-story office building. The firm also has an office in a South Bend neighborhood.

George Plews, a founding partner, said the firm’s culture has been to develop its expertise in a few areas and allow that expertise to grow organically to suit client needs. The attorneys started with a focus on “science that had very sophisticated legal needs,” which brought a lot of environmental work to their offices. Since then, the firm has branched into new practices such as insurance, business, real estate and a little church law while it has continued to handle complex litigation.

Also, in keeping with the firm’s distinctive nature, the managing partner gig is a one-year stint. Partners who ascend to the position hold it for a single year then step away, although they may return to serve in subsequent years.

This is Gotwald’s first turn as managing partner, but Plews said he is confident Gotwald will have multiple turns.

“He’s one of the real rising stars in insurance coverage,” Plews said. “He has a very keen, analytical mind; he has an engineer’s mind. He breaks things down to see how they work, and that’s useful in a covered case because there are always technical aspects to those kinds of cases.” 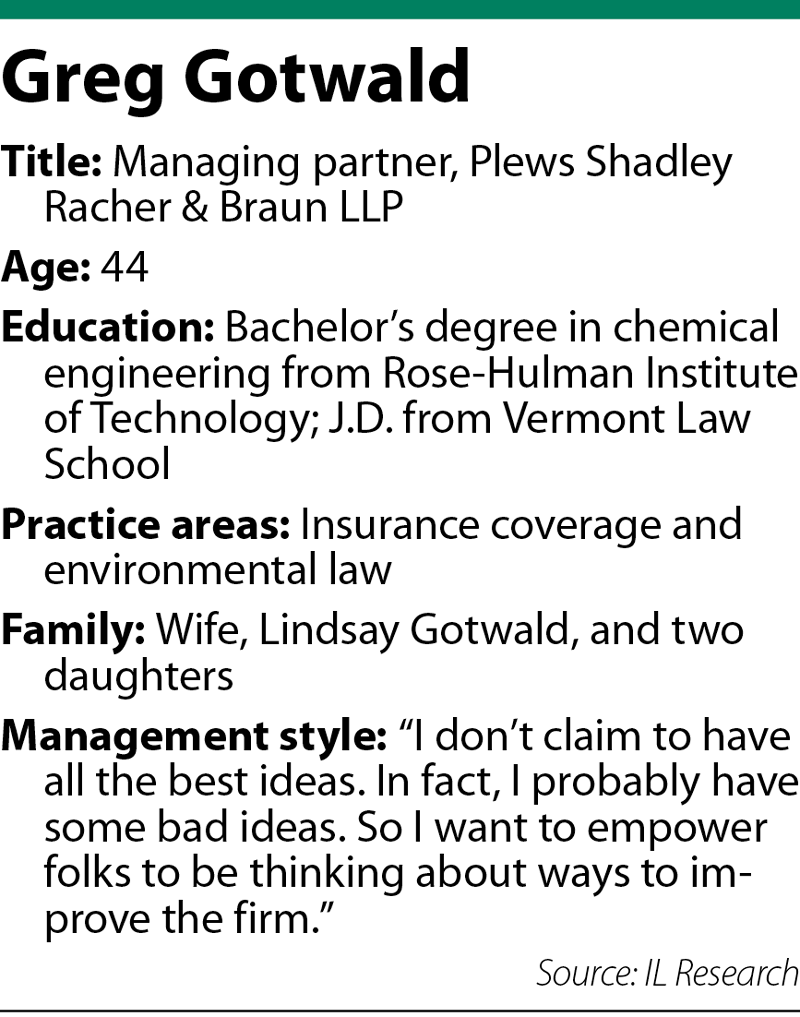 Although the COVID-19 pandemic has upended the status quo in the legal market and created an opportunity to change, Gotwald is not planning to throw out the Plews Shadley playbook. Instead, he said he wants to maintain the firm’s culture, which he described as an “eclectic group of attorneys” who are intentional about working together. And to do that, he intends to continue growing the firm organically rather than expanding its reach through a combination.

Even so, Gotwald still sees opportunities. He wants Plews Shadley to continue investing in technology and enhance the value-add. In addition, he plans to keep the partnership focused on recruiting diverse attorneys to work at the firm.

His success as a leader, he said, will be indicated by the level of client and employee satisfaction at the end of the year.

Gotwald, who peers at the world through a pair of thick-framed glasses, changed his view of engineering while he was an undergraduate working at Toyota. He noticed the engineers were not the decision-makers at the plant, and he saw attorneys struggling to understand
what he considered “pretty simple engineering concepts.”

So he turned his attention to the law and, after consulting the U.S. New & World Report rankings, applied only to the Vermont Law School because it was listed as having the best environmental law program in the country.

Gotwald’s analytical approach and deliberative decision-making are the skills he brought as a member of the Child Advocates Board of Directors and during his three-year tenure as president. Child Advocates Executive Director Cindy Booth said Gotwald had a calm and intellectual leadership style that was especially beneficial when the organization had to expand its stable of employees to address the opioid crisis.

Booth described Gotwald as “a quiet guy,” but the board always wanted to hear his analysis and legal reasoning.

“He is just going to be fabulous,” Booth said of Gotwald becoming managing partner. “Kudos to Plews for recognizing his leadership skills.”

Looking at the year ahead, Gotwald said he is ready to make any turn necessary.

“I think refusing to adjust is not a good thing for a business, and you need to be wiling to constantly assess and reassess,” Gotwald said. “You’ve got your goals, but something like a pandemic, it can throw it out.”•