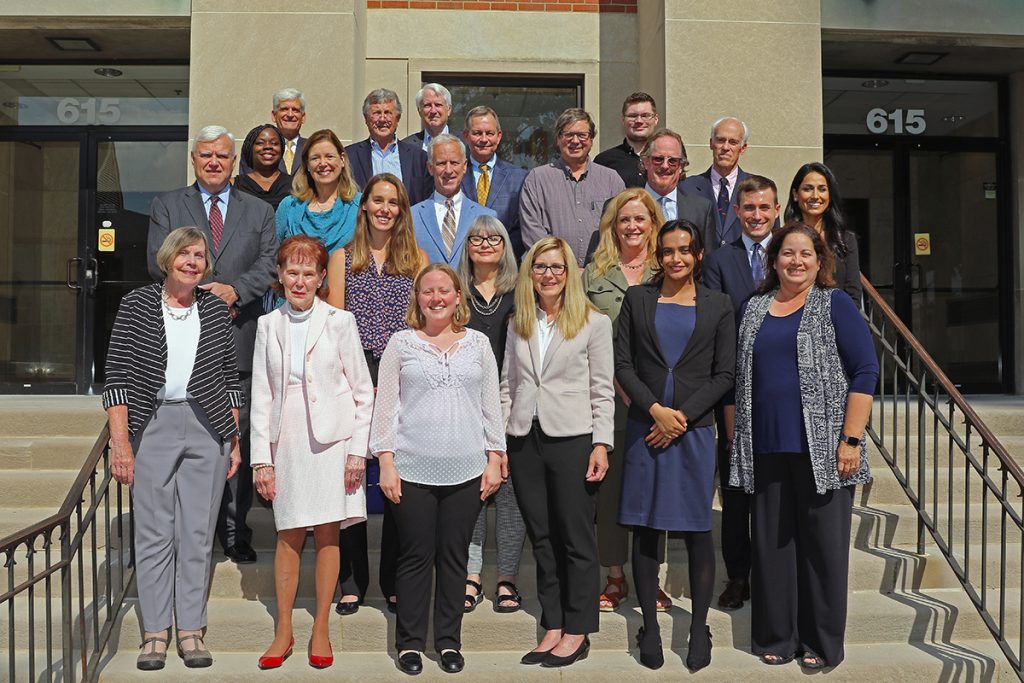 Employees and supporters of the Indianapolis Legal Aid Society pose for a photo to mark the society’s 80th anniversary. They say they are rewarded by their work with ILAS. (Photo, Michael Harding)

On a sultry August afternoon, attorneys, administrative staff, board members and friends of the Indianapolis Legal Aid Society assembled on the steps of the nonprofit’s building and had their picture taken.

They organized themselves into rows by height,initially crowding into a shady section of the steps. But as more arrived, the group had to move to the sunbathed portion of the facade. Soon a banner emblazoned with “Happy Birthday” was unfurled and held by those standing in front.

The people had gathered to commemorate the 80th anniversary of ILAS. Since it first opened its doors in 1941, the organization has tended to the civil legal needs of low-income individuals and families so they can find good jobs, stay in their homes and care for themselves and their loved ones.

Attorney Elizabeth “Betsy” Hartman volunteered for five years at ILAS and has been on the board for seven, currently serving as treasurer. She is able to give the other board members a sense of the rewards and struggles that come with being a legal aid attorney and helping whoever walks in the door.

“I found it very meaningful … very touching,” Hartman said of her time volunteering. “You get close to your clients — you just feel like you’re really making a difference, where sometimes in big law you don’t feel as if you’re making as much of a difference.”

Photographer Michael Harding made a few last-minute adjustments to his camera then gave some instructions to the group. “Make sure you can see me,” he told them.

Harding lifted the camera to his eye and depressed the button. A series of quiet clicks quickly dissipated in the heavy air.

Just as Harding was getting ready to snap a second set of pictures, the group called for the photographer to wait while Dylan Pittman came dashing down the sidewalk. The Barnes & Thornburg associate got acquainted with ILAS by serving as a team captain during the agency’s 2020 holiday campaign and then, at the encouragement of the firm’s partners, he joined the board.

Pittman got a taste of legal aid when he served as a volunteer intake attorney one Saturday a month for the Neighborhood Christian Legal Clinic. When that experience of helping families and being able to exercise his Spanish language skills ended, he said he was still interested in giving back to the community.

“I thought this was the perfect opportunity … ,” Pittman said of becoming a part of ILAS. “I’m still part of something that really contributes to local legal services’ needs.”

After the photo session concluded, Pittman had to make another dash. He left quickly to retrieve his twins from day care.

Jackie Leverenz and Ron Walker chose to linger. Like the others who gathered for the picture, the pair have been a significant part of the organization’s history, with Walker serving on the board for more than 20 years and Leverenz working there as a legal secretary for 61 years before retiring and taking a seat on the board.

Walker, of counsel at Plews Shadley Racher & Braun, marveled at the efficiency of ILAS employees and their ability to handle a case from beginning to end for the same amount of money that an attorney in private practice would spend just to open a case.

Paul Lindeman, retired board member and former colleague of Hartman at Krieg DeVault, echoed that observation, calling ILAS the “most efficient provider of legal services for the poor.” He pointed to the families who will likely be swept away in the flood of evictions that is anticipated once the pandemic-induced moratorium is lifted. Without the attorneys at the society and other legal aid providers, those households would have to work through the crisis by themselves.

“They would get run over by the legal system,” Lindeman said. “They’d get evicted and that would be the end of it. They would end up on the streets.”

The photo did not tell the stories of the clients who were helped, or of the triumphs and setbacks written into the society’s history. Instead, it captured a few moments during the 80th anniversary year, showing future ILAS team members some of the people who have devoted their skills and hearts to the organization.

Slowly, people drifted away after all the pictures had been taken. Some headed home while others gathered inside the ILAS office for a few more minutes of conversation.

Sarah Harvey, a paralegal, was smiling brightly as she finished a couple of work-related tasks. She had been able to deliver a bit of good news to a client in the morning, and the client’s joy was still making her gleeful.

“I felt like it was really powerful,” Harvey said of being part of the photo. “I’m happy that I can experience and be a part of something that has been lasting for that long, and hopefully it will last for another 80 years so we can keep helping the people in Marion County. “

As probably happened when she still worked there, Leverenz was among the last to leave the office. She walked to the back door, pausing for a moment to peek into the conference room that the ILAS family named in her honor, then stepped into the summer evening.

Earlier, she had reflected on the message that comes from decades of service.

“There’s definitely a lot of people out there that need help and will always need help and need an organization like this to carry on not just now, but in the future,” Leverenz said.

“It’s very, very important that this agency remains in effect. I cannot stress that enough.”•