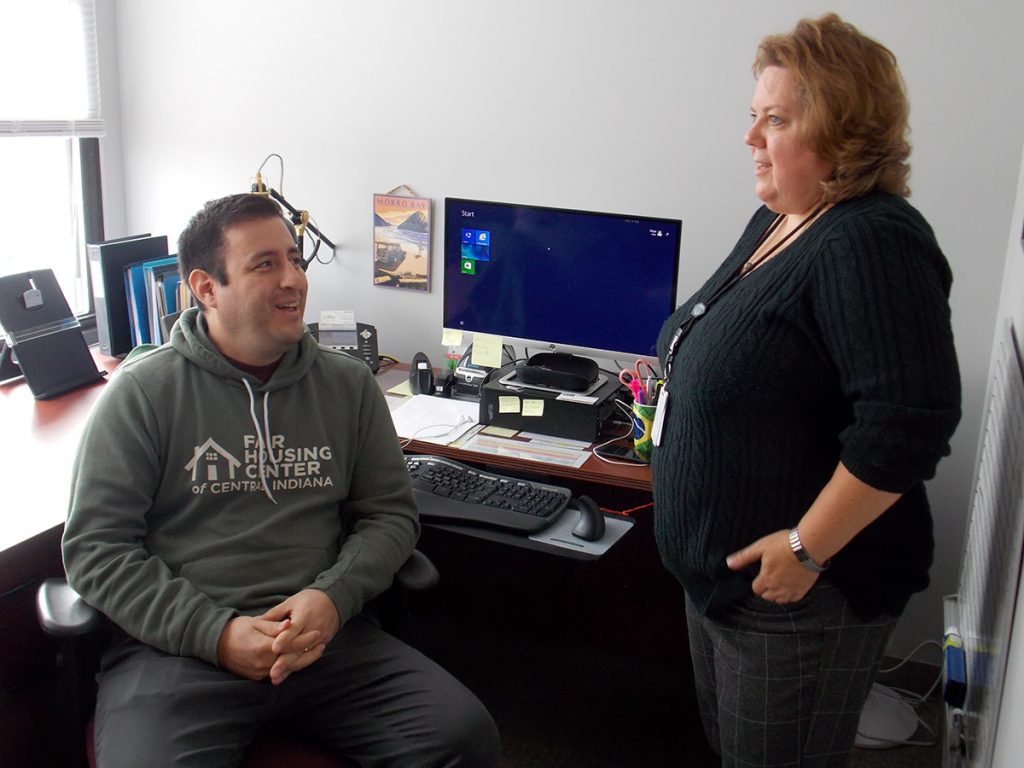 Although the legal battle with rent-to-own housing company Casas Baratas Aqui ended with what the Fair Housing Center of Central Indiana calls a “groundbreaking resolution that will have national impact,” the bitterness and damage invoked by the defendants’ counterclaims continues to rankle both sides in the litigation.

The consent decree between FHCCI and Marshall Welton, who operates and manages a collection of limited liability companies doing business as Casas Baratas Aqui, was announced Nov. 11 and ends the federal lawsuit, Fair Housing Center of Central Indiana, Inc., et al. v. Marshall Welton, et al., 1:18-cv-01098. As part of the settlement, the defendants will pay the plaintiffs $395,000 plus attorney fees and make specific changes to their real estate business practices.

None of the parties admitted fault or liability.

The lawsuit claimed Casas Baratas was targeting members of the Hispanic community with promises of homeownership. However, according to the complaint, the purchasers were offered rent-to-own contracts which put them in uninhabitable homes under financial terms that were difficult to meet. When they fell behind in their monthly payments, they were evicted and left with nothing for the financial and sweat equity they had put into the homes.

In filing their answers to the complaint, the defendants hit back with their own allegations against FHCCI. They alleged the nonprofit sent letters to customers implying Casas Baratas was discriminating and had launched a “predatory scheme” against Latino families. Moreover, they claimed Amy Nelson, executive director of FHCCI, had made a presentation and stated as facts that the defendants were exploiting the Latino community.

The defendants ended up withdrawing their counterclaims after the plaintiffs filed a motion asking for permission to submit an amended complaint which would include additional defendants. From there, the settlement agreement was eventually reached.

In a statement, the defendants’ attorney Steven Runyan, partner at Kroger Gardis & Regas, LLP, did not make any concessions in regard to the counterclaims. He said his clients proposed to dismiss the claims in an effort to resolve the case.

“At the end of the day, our clients had to make a business decision that provides the opportunity to save the business,” Runyan said. “Our clients continue to believe their claims are legitimate but being right sometimes results in a pyrrhic victory.”

The FHCCI vigorously denied the defendants’ allegations and described the counterclaims as a strategic lawsuit against public participation (SLAPP).

“It was apparent at the beginning that the true purpose of the defendants’ counterclaims was to harass the FHCCI into dropping the litigation of the alleged violations in our filed court complaint,” Nelson said. “… Despite a year of exhaustive discovery, defendants’ aggressive litigation of their counterclaims and (a) change in attorneys, the defense then sought to unilaterally dismiss those counterclaims to avoid potential penalty under the (Indiana) Anti-SLAPP statue and Rule 11(b) of the Federal Rules of Civil Procedure.”

Putting the case together

Casas Baratas popped on FHCCI’s radar as the nonprofit began shifting part of its focus onto systemic-based work. While continuing to investigate and respond to complaints brought by individuals, the agency had turned its attention to tackling broader discriminatory practices. Such conduct can be difficult for victims to identify that they have been purposefully harmed because the policies and practices fueling the bad behavior are either ingrained or hidden.

FHCCI secured a grant to research systemic issues surrounding lending, insurance and zoning. Initially, rent-to-own and land contracts were not part of the project, but the questions and concerns about these types of products kept coming up again and again.

The nonprofit’s case against Rainbow Realty — Fair Housing Center of Central Indiana, Inc., et al. v. Rainbow Realty Group, Inc., et al., 1:17-cv-1782 — developed first and now is a pending class action in the Southern Indiana District Court. While in the neighborhoods investigating Rainbow, the FHCCI staff members kept noticing Casas’ signs, according to Nelson. The nonprofit began tracking the ownership of Casas Baratas, then sent surveys to addresses believed to be owned by the business.

“We wanted people to tell us good experiences as well as bad experiences,” Nelson said. “We asked everybody the same questions and, again, we had no way of knowing what we were going to find. It could have been legitimate transactions and we would have dropped the investigation at that point.”

The FHCCI filed the Casas Baratas lawsuit against Welton and his other businesses in April 2018, alleging violations of the Fair Housing Act, Equal Credit Opportunity Act and Truth in Lending Act, among others.

Runyan disputed the allegations against the defendants, saying Casas Baratas “worked tirelessly” with customers in either giving extensions of time for missed option payments or letting them out of their contracts if circumstances changed.

“The resulting impact on this class was that they were better off because of our clients, not worse off or harmed,” Runyan said.

The housing sector has long been the target of SLAPP suits, according to Evan Mascagni, policy director for the Public Participation Project, which is pushing Congress to pass federal anti-SLAPP legislation. And even if they are dismissed, the party who filed the action can still benefit.

As an example, Mascagni pointed to an article he co-authored for the Spring 2019 edition of the First Amendment Law Review from the University of North Carolina School of Law.

In the article, he pointed to a 2003 SLAPP lawsuit filed against the Northwest Bronx Community and Clergy Coalition. The nonprofit had been picketing and posting flyers that highlighted the “egregiously substandard conditions in which the tenants were living.” In response, the realty company that owned the buildings countered with claims of trespass, libel and wrongful interference with business relationships.

Even though the court eventually found the realty firm had failed to submit any evidence to support the claims, the judge had still allowed the litigation to continue for years, which had the effect of halting the nonprofit’s advocacy and costing it more than $1 million.

The goal of SLAPP suits, whether against tenants, online reviewers or citizen groups, is to scare people and inhibit free speech, Mascagni said. Even if the lawsuit is dismissed, it still creates a “chilling effect” in which the public is intimidated and is reluctant to speak freely.

Nelson said the FHCCI has been “substantially harmed” by the defendants’ counterclaims.

The nonprofit’s attorneys had to spend hundreds of additional hours at additional costs defending against the claims, and the agency’s insurance premiums have also increased solely because of the filing of the counterclaims. Also, the FHCCI staff had to spend “significant additional hours” responding to the “baseless claims” and felt additional stress because they themselves were accused of inappropriate acts by the defendants.

“The FHCCI is a small advocacy-based nonprofit working to ensure housing providers comply with fair-housing laws,” Nelson said. “The repercussions of the defendants’ counterclaims will continue to injure the FHCCI well into the future.”

According to Nelson, FHCCI is at most a $500,000 organization when fully funded. In tight times, it runs on $350,000 or a little more. Still, Runyan said his clients could not match the money the FHCCI was putting into the litigation.

“Our clients were outfunded and could not continue to fight the lawsuit regardless of the validity of their position,” Runyan said. “…The cost of the lawsuit did not impact FHCCI’s operations the way it impacted our clients.”

Relman, Dane & Colfax PLLC partner Stephen Dane, who has been litigating for fair housing advocates for 35 years, said SLAPP suits like the one FHCCI encountered are “pretty rare,” but he still advises his clients to be careful when talking about their cases. Although he has successfully gotten counterclaims dismissed, he did not assert that all SLAPP suits were doomed to a quick end.