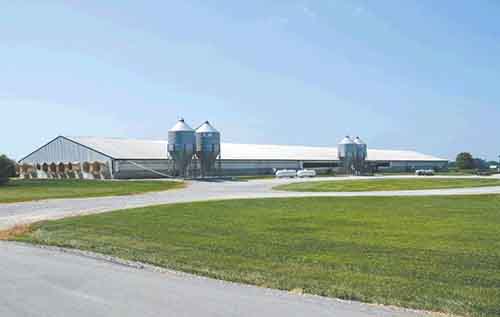 The 4/9 Livestock concentrated animal feeding operation in Hendricks County, which houses thousands of hogs, is the subject of an appeal under Indiana's Right to Farm Act that the United States Supreme Court declined to hear. (IL file photo)

A protracted dispute between a concentrated animal feeding operation in Hendricks County and its neighbors ended Monday with the U.S. Supreme Court denying certiorari to the nearby homeowners who claimed the odor from the 8,000 hogs disrupted their lives and diminished their health.

The case, Himsel et al. v. 4/9 Livestock LLC, et al., 20-72, began in Hendricks Superior Court in October 2015. Richard and Janel Himsel and Robert and Susan Lannon sued the neighboring CAFO and challenged the constitutionality of Indiana’s Right to Farm Act. The defendants in the case were Samuel Himsel and his sons, Cory and Clint, their hog-raising operation, 4/9 Livestock, and their supplier, Co-Alliance.

In a five-page press release, defense counsel, Christopher Braun and Jonathan Emenhiser, partners at Plews Shadley Racher & Braun LLP, provided a detailed history of case, which was titled in Indiana as Himsel v. Himsel, and called the Supreme Court’s denial a “huge win … for Indiana’s farmers and the entire agriculture community … .”

The plaintiffs were represented by the Hoosier Environmental Council and its senior staff attorney Kim Ferraro. She acknowledged the petition for a hearing at the U.S. Supreme Court was a “long shot” but she said the fight to change the state’s Right to Farm Act will continue.

“The Supreme Court’s denial to accept cert does not diminish the Environmental Council’s stance that the law and facts are on our side,” Ferraro said. “We are not done fighting these issues.”

As the defense attorneys point out, the plaintiffs were not successful at any point in their litigation. They lost in the trial court and at the Indiana Court of Appeals, which also denied the plaintiffs’ petition for a rehearing.  The Indiana Supreme Court heard oral arguments in January, but on a 3-2 vote denied transfer.

In its petition to the U.S. Supreme Court, the Himsels and Lannons argued, in part, that Indiana’s RTFA runs afoul of the Fifth Amendment’s Takings Clause. They claimed the Indiana General Assembly “radically altered” RTFA’s scope in 2005 with an amendment that prohibited nuisance claims against agricultural operations that converted to CAFOs.

The hog operation near their properties, they told the courts, creates such pungent odors that Himsels and Lannons could no longer enjoy their homes. Moreover, they claimed their property values had dropped significantly.

“Put another way, the Indiana RTFA has stripped the Himsels’ and Lannons’ of their treasured property rights and deprived them of any remedy for the ongoing violation of those rights,” the petition stated.

The defendants pointed out to the Supreme Court that the Indiana Right to Farm Act does not provide blanket immunity from nuisance and trespass claims. They noted that the Indiana Court of Appeals applied the RTFA to bar the plaintiffs’ nuisance claims because the Himsels and Lannons had failed to offer any evidence of negligence.

In the press release, the defendants reiterated their argument and faulted the plaintiffs’ takings claim.

“While the Constitution prohibits takings by government entities without just compensation, the Plaintiffs named as defendants — and sought relief against — only private parties,” Braun said. “The Plaintiffs did not seek relief from the State. Additionally, the Plaintiffs were vague about the specific acts they claimed constituted a taking of their properties. They focused on the location, construction and operation of the hog barns, but those are purely private activities.”

The Himsel case is over, but both sides dispute the implications of the Supreme Court’s denial.

Braun highlighted the history of the Himsel lawsuit and asserted the Supreme Court did not need to get involved because multiple Indiana courts found the plaintiffs did not establish a proper takings claim.

“We are extremely pleased not only for our clients but also for all Indiana farmers that the Supreme court refusal to grant certiorari leaves intact the favorable decisions by the Indiana trial court, Court of Appeals and Indiana Supreme Court in favor of the Defendants in upholding Indiana’s Right to Farm Act,” he said.

Ferraro sees growing concern about the state’s RTFA. She believes the public is starting to see Indiana “laws are out of balance” and they want corporations to be held accountable for acts of negligence.

“It’s the end of this case but it’s not the end of our fight on this issue,” she said.