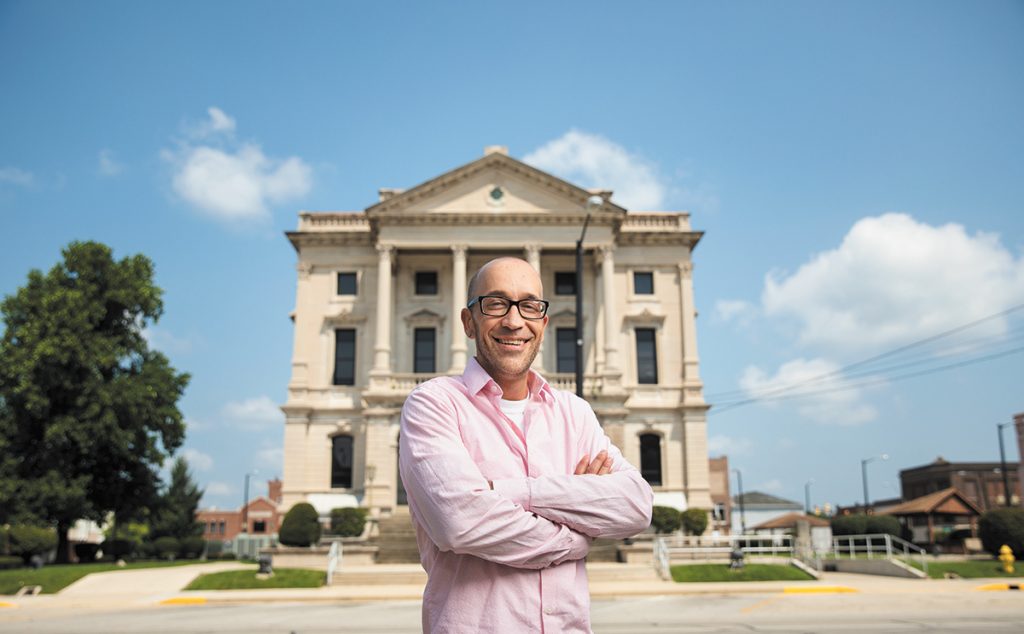 Marion man Tyson Timbs has been at the center of Indiana civil forfeiture litigation for more than seven years. He’ll appear before the Indiana Supreme Court for the third time this month as the state seeks to forfeit his Land Rover. (Photo courtesy of the Institute for Justice)

Civil forfeiture reform has long been a topic of conversation within the Indiana courts and Legislature. The year 2018 saw a major forfeiture reform bill pass the General Assembly, while in 2019, the United States Supreme Court weighed in on an Indiana forfeiture case.

Now in 2021, the same issue is back before both the judicial and the legislative branches of Indiana government. A Senate bill would implement forfeiture reforms that practitioners say have long been necessary, while a case scheduled to go before the Indiana Supreme Court this month could further refine how trial courts consider whether a forfeiture is lawful.

As these civil forfeiture reform efforts advance through the Hoosier government, practitioners say the progression of the issues has been natural. Previous reforms in the Hoosier State focused mostly on the forfeiture of vehicles, but the issues now being considered are taking a broader look at forfeiture practices.

“This is the next stage of the evolution,” Indianapolis criminal defense lawyer Todd Ess said.

Before civil forfeiture reform came to the Indiana Legislature in 2018, the case of State of Indiana v. Tyson Timbs was in progress. Convicted in 2013 of dealing heroin and conspiracy to commit theft, Tyson Timbs then faced a forfeiture action against the Land Rover he was driving when he participated in a controlled-buy sting operation. The Grant Superior Court in 2015 denied the forfeiture request, setting off a series of appeals that is still continuing.

On Thursday, Timbs will go before the Indiana Supreme Court for the third time. After the 2019 SCOTUS ruling in Timbs holding that the Eighth Amendment’s Excessive Fines Clause does apply to the states, the Indiana Supreme Court issued a second ruling in October 2019 creating a test for reviewing the proportionality of a forfeiture under the Eighth Amendment.

Using that test, the Grant Superior Court in April 2020 again denied the state’s request to forfeit the Land Rover, which was returned to Timbs in May. Now in a direct appeal to the Indiana justices, the state is asking the high court to revisit its proportionality test.

“… (T)his Court could easily resolve this case by rejecting Timbs’s claim that the forfeiture is grossly disproportionate,” the state wrote in its brief to the Indiana Supreme Court. “Yet applying such a test in the first place creates serious problems: As the trial court’s decision here aptly illustrates, subjecting in rem forfeitures to a gross disproportionality test not only contradicts the uninterrupted history of such forfeitures … it also undermines the legislative judgments regarding the seriousness of drug crimes and produces widely divergent results.”

The state’s appellant brief focuses significant attention on the fact that the Grant Superior Court called Timbs’ offenses a “victimless crime” because his drugs were sold only to undercover officers, which the state says contravenes the Legislature. “Discounting such validly adopted laws, and refusing to enforce the forfeiture statute against the instrumentalities of such offenses, imposes a novel, judge-made, utilitarian standard on policymaking and ignores the breadth of the legislature’s police power … ,” the brief says.

Instead, the state is urging the Supreme Court to adopt the position that the “Excessive Fines Clause requires only that the property targeted by an in rem forfeiture be a genuine criminal instrumentality.”

Similarly, the attorneys general of Texas, Arkansas, Louisiana and Oklahoma filed an amici brief urging the Supreme Court to reverse the trial court. If a gross-proportionality test is applied to civil in rem forfeitures, the amici wrote, then the justices “should employ the reasoning of the U.S. Supreme Court’s Cruel and Unusual Punishments Clause jurisprudence.”

Timbs, however, argues the state is merely relitigating issues on which it previously lost. The state didn’t challenge the trial court’s factual findings, his brief says, further rejecting the argument that the lower court underestimated the harm caused by Timbs’ crimes.

“… (F)ar from being its ‘sole rationale’ … the harm Timbs caused was but one factor among many that the court considered,” the brief authored by lawyers with McNeeley Law in Shelbyville and the Institute for Justice in Arlington, Virginia, says. “Simply, the State’s argument for reversal rests on a fundamental misreading of the decision below.”

Regardless of the analysis the trial court used, the state contends the forfeiture is permissible. Timbs, however, continues to argue that taking his Rover would be grossly disproportionate to his crimes.

Before Timbs reached the U.S. Supreme Court in November 2018, the Indiana General Assembly that spring had enacted a wide-ranging civil forfeiture reform bill addressing issues such as innocent owners, the timeline for forfeiture actions and the process for disbursing forfeiture funds. Now in the 2021 session, Senate Bill 24 is looking to expand on those efforts.

Authored by Sen. Phil Boots, R-Crawfordsville, SB 24 addresses issues including the seizure of unabandoned or unclaimed property, the process for regaining custody of seized property pending a court order and the state’s participation in a federal forfeiture agreement, among other things. Boots did not respond to multiple interview requests.

Ess, whose criminal defense practice includes significant work in civil forfeiture, said the first round of forfeiture reform and the cases that accompanied the legislative action, including Timbs, focused largely on the forfeiture of vehicles. SB 24, however, addresses broader issues that Ess has previously advocated for.

For example, the bill only allows property that is claimed or unabandoned to be forfeited if the owner is criminally convicted. It also raises the standard of proof to a clear and convincing standard, up from a preponderance of the evidence standard.

Also important to Ess is the provision allowing for the right to a jury trial in civil forfeiture proceedings. Indiana law does not recognize that 7th Amendment right to a jury in civil proceedings, he said, but already, quasi-criminal cases such as traffic infractions and ordinance violations can go before a jury. Civil forfeiture is a similar quasi-criminal matter, he said.

Civil forfeiture reform is a major platform for the Institute for Justice. The organization in January released the third edition of its report, “Policing for Profit,” which grades the states on their civil forfeiture policies.

In the last edition of the report, Indiana received a B+. But the most recent report dropped that grade to a D, a change that senior research analyst Jennifer McDonald attributes to the 2018 reform efforts.

Before those efforts, Indiana did not have a written rule that monetarily incentivized civil forfeiture for law enforcement, though McDonald said the incentive was there in practice. But the 2018 legislation created a disbursement formula that, according to McDonald, explicitly allows police and prosecutors to keep up to 93% of forfeiture proceeds.

IJ lawyer Sam Gedge challenged that disbursement in the case of Horner v. Curry, pointing to the Indiana constitutional provision requiring forfeiture proceeds to go into the Common School Fund. The Supreme Court, however, upheld the legislative disbursement procedure.

Looking at SB 24, Gedge said there are some good elements to the legislation, such as language that attempts to codify the excessive fines standard in response to Timbs. But other existing laws, such as those allowing prosecutors to outsource forfeiture proceedings to contingency fee lawyers, still raise concerns.

At IL deadline, SB 24 had been assigned to the Senate Judiciary Committee but had not been scheduled for a hearing.•