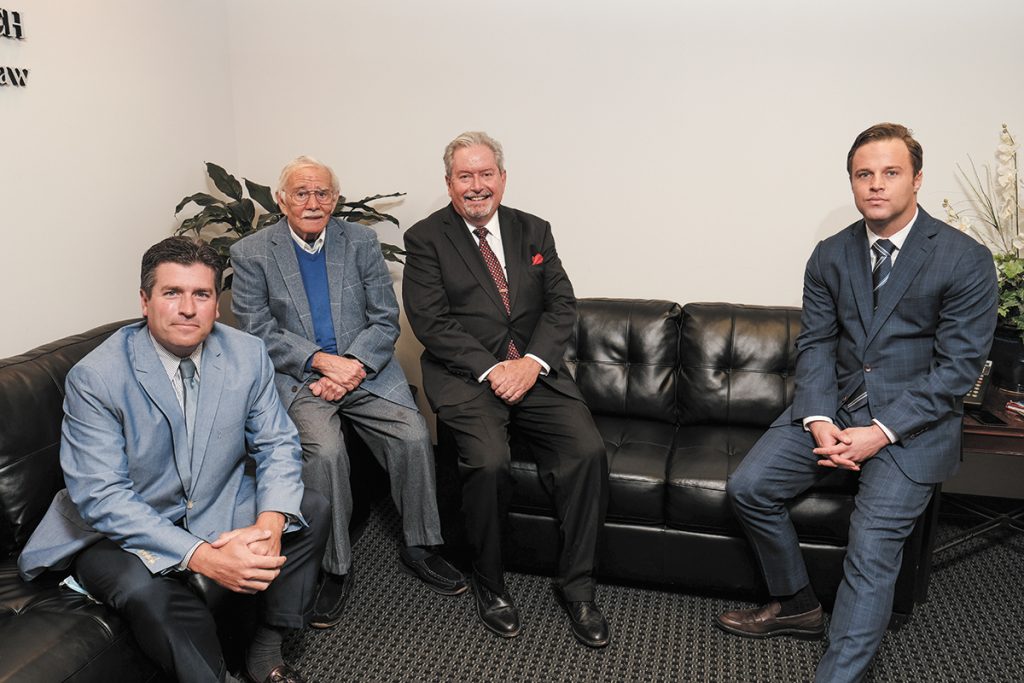 Despite their collective years of practice, a recent case tried by four plaintiff lawyers was in some ways a unique experience.

Of course there was the ongoing COVID-19 pandemic that lawyers Louis “Buddy” Yosha, Rich Cook, Bryan Tisch and Brandon Yosha had to contend with during their trial in Marion Superior Court. There was also the fact that at the time the case of Simmons v. Indianapolis Power & Light Co. went to trial, Brandon Yosha had only been a licensed lawyer for five weeks.

Plus, in the world of personal injury cases, trials aren’t nearly as common as they used to be. What’s more, this trial lasted two full weeks — also uncommon in personal injury law.

Despite these somewhat unusual circumstances, the team from Yosha Cook & Tisch secured a multi-million-dollar victory for their clients, Wayne and Amy Simmons. The total verdict reached $20 million, adjusted by a fault reduction for a net win of $12.2 million.

A lawyer for Indianapolis Power & Light did not respond to a message from Indiana Lawyer seeking comment on the case and verdict. The plaintiffs lawyers, however, offered a glimpse into what it was like to try a case in-person in a time when in-person interaction is limited.

The case centered around Wayne Simmons, who to this day describes himself as a “union carpenter,” according to Tisch. Simmons hasn’t been able to work in his profession, however, since 2014.

That year, Simmons worked for Sterling Boiler & Mechanical, a contractor hired for maintenance work at the IPL Petersburg plant. Simmons and another worker were dispatched to the plant to excavate a designated area that would be filled with concrete and used as a footing for construction of a large hydrogen tank.

IPL issued a dig permit to Simmons, which Tisch said was essentially a “green light” to start his work. The permit was meant to certify that there were no live electrical lines where the dig would occur.

However, according to Cook, the employee in charge of researching the area for the dig permit decided it was not necessary to use locating devices to check for electrical lines. That employee based his opinion on a drawing of the area, Cook said — an incorrect drawing that reflected no live lines.

But as Simmons used his jackhammer on the site, he struck a 4,160-volt electrical line. The ensuing explosion sent Simmons flying back, and within four days he began to develop neurological symptoms.

It’s been six years since that day, and Simmons’ symptoms persist, the lawyers said. In addition to being permanently disabled due to chronic pain, Simmons has been to hundreds of medical appointments, has had several infusions, takes regular pain medication and has even had three spinal stimulators implanted to help with his pain.

Simmons has also lost the ability to participate in his favorite activities, such as hunting, fishing and a family favorite, horseback riding. His wife, Amy, also suffered a loss of consortium.

Though the Yosha Cook & Tisch team had been preparing the Simmonses’ case for years, it took a little bit of luck to get into the courtroom.

In Marion County, the superior courts were only holding one jury trial per week, Tisch explained. It just so happened their case was assigned to Judge James Joven, and their original trial date, Oct. 26, fell on the same week that Joven’s court was set to hold a trial.

Even so, it came as no surprise to the plaintiffs’ team that IPL moved for a COVID-related continuance three days before trial was set to start. But according to Brandon Yosha, the lawyers made the argument that justice delayed is justice denied, noting that Wayne Simmons had already waited six years to get his case before a jury. Given the current backlog in trial courts, Judge Joven decided to move forward with a socially distanced trial.

The effects of the pandemic were present in the courtroom from the beginning, the lawyers said.

Jury selection for a “normal” trial might take a morning, Tisch said, but in this case, voir dire lasted an entire day. And instead of the traditional two alternates, this time there were three, just in case multiple jurors tested positive.

Also different was the actual jury box, which for this trial was not full of jurors, Cook said. Instead, jurors were seated in the gallery, wearing masks and allowing room for social distancing. The gallery also included one seat available to the public, which Tisch said was occasionally taken.

Instead, the jury box was used for the witness stand, Tisch continued. Technology also played a role, with the plaintiffs’ team using a live video feed to present an out-of-state witness.

“I asked the court staff, and they said, ‘You’re the first ones to ever incorporate this technology,’” Tisch said.

Masks made it difficult to read jurors’ expressions, the lawyers said, though Brandon Yosha added that he learned to better read expressions despite the masks as the trial progressed. Then at the close of evidence, jurors deliberated in the courtroom itself.

Having officially joined the Indiana bar on Sept. 21, Brandon Yosha was nervous and excited as he stood to deliver his opening argument on Oct. 27. He’s wanted to be a trial lawyer since his first day at Indiana University Robert H. McKinney School of Law, following in the footsteps of his father, Buddy.

To prepare for his trial debut, Brandon said there were many late nights spent rehearsing and preparing with Tisch. In addition to delivering part of opening statements, the younger Yosha also delivered part of the closing argument and performed the direct examination of Amy Simmons. He got to know the clients, he said, visiting their home and forming a personal connection.

When the verdict came down, Brandon said he was “extremely humbled” to be part of a successful trial so early in his career. But giving young lawyers a place at the counsel table isn’t new for the firm — Tisch recalled Buddy having him put witnesses on the stand one day after he was sworn in as an Indiana attorney in 2001.

The law wasn’t always Brandon’s dream, though. He was a football star in high school and college, but knee injuries sidelined him from the game he loved. His next choice, though, was to become a trial lawyer like his dad.

Listening to a recording of his son’s closing argument, Buddy shared a thought with his star-athlete son: Already in his legal career, he said, Brandon was 70% as good at being a lawyer as he was at the game he’d played all his life.

Later, he increased the percentage to 80%.

“That was my proudest moment,” Brandon said of his dad’s comments. “Football? Forget it. For him to say that was the proudest I’ve ever been.”

During closing arguments, the Yosha Cook & Tisch team gave the jury a $40 million figure: $35 million in damages for pain and suffering and $5 million in what Cook called “hard damages.” The lawyers went into the trial thinking the case was worth eight figures, Brandon said, and when the $20 million came down, that thought became reality.

“We did some focus groups before trial, and the verdict was a little higher than our focus group,” Cook said. “We were pretty satisfied, and I know our client was.”

Ultimately, the jurors found IPL to be 60% at fault, Sterling Boiler 30% and Simmons 10%, reducing his total verdict to $12.2 million. Though each lawyer played a specific part in reaching that result, they agreed their victory came from their collective efforts.

“It was a very good team effort,” Cook said. “We all worked really hard, and we’re very happy with the outcome.”•