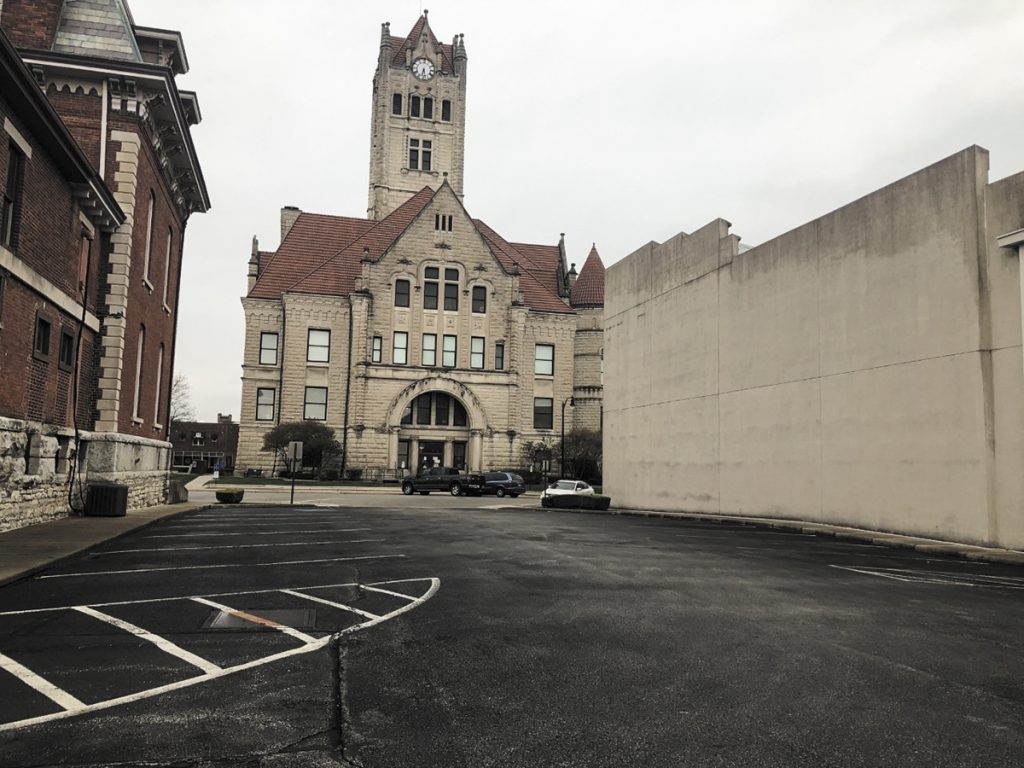 Parking lots near the Hancock County Courthouse in Greenfield are nearly deserted as courts and government offices have closed during the pandemic. (IL photos/Olivia Covington)

Like the rest of the world, the judiciary has been walking a tightrope for the last six weeks, trying to keep courts open while protecting judges, staff, lawyers, litigants and the public from COVID-19 exposure.

The solution, as in most other professions, has been a transition to remote work, though that transition has not been total. Some judges still have come to court every day, working alongside a skeleton staff to keep dockets moving. Some clerk’s offices have remained open, too, offering limited access to public services all while adhering to social distancing guidelines. 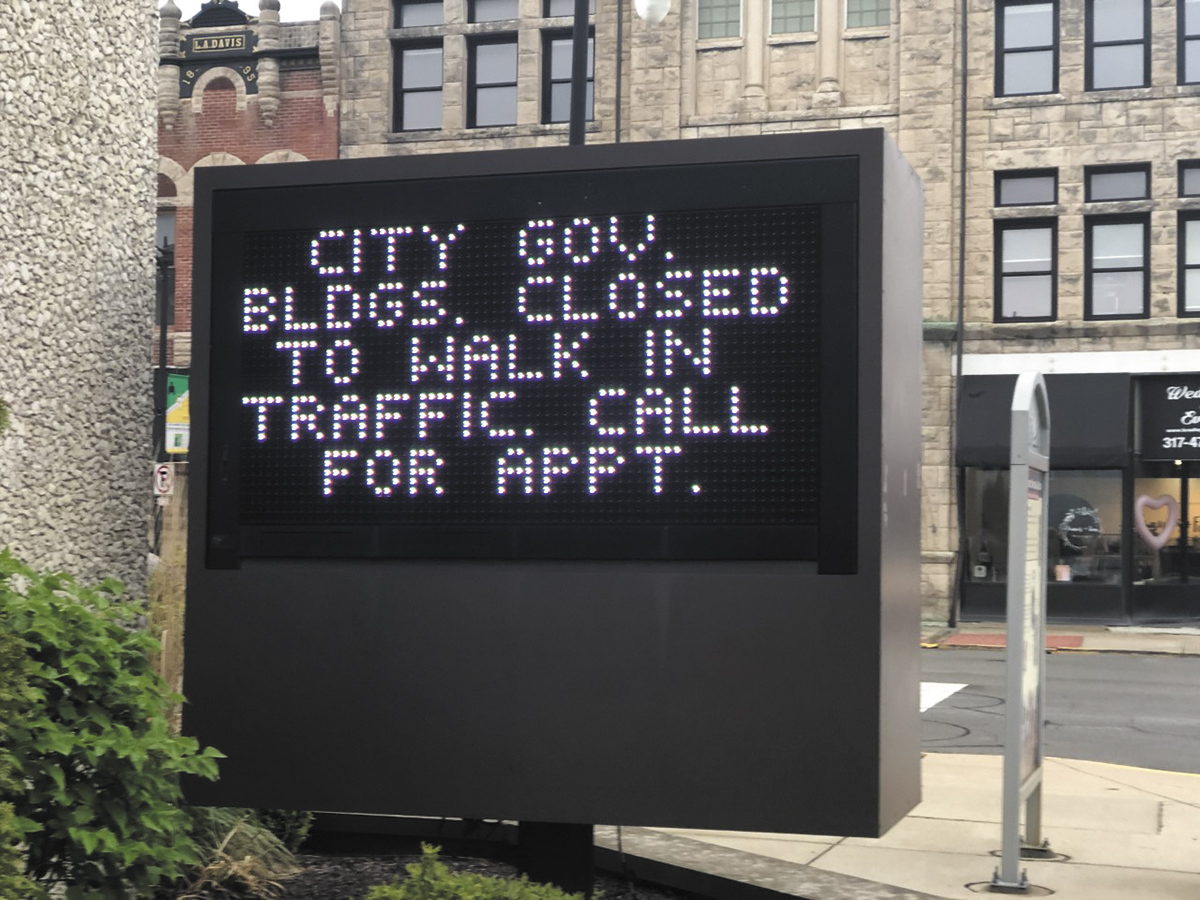 Also like the rest of the world, the judiciary is grappling with the question of essential versus non-essential services. Which hearings can be continued, and which must continue to honor defendants’ rights?

And then, of course, there’s the future. As society begins to reopen, how quickly can courts restore operations to full capacity? What will all of the continuances mean for already-heavy caseloads?

“Will it be easy? No,” said Jane Magnus-Stinson, chief judge of the U.S. District Court for the Southern District of Indiana. “Will we handle it? Yes – we always do.”

An informal survey conducted by The National Judicial College found roughly 60% of judges said their courts were operating at 25% or less of normal capacity. The survey cited testimony from Sonya A. Morris, judge of the East Chicago City Court, who said her court is only allowing initial misdemeanor hearings, bond hearings and in-custody hearings.

The story is similar in trial courts statewide, with courts in all 92 counties approved for reduced emergency operations under Administrative Rule 17.

In Dearborn and Ohio counties, where Circuit Judge James Humphrey presides on both benches, hearings in cases such as children in need of services or juvenile delinquencies have continued telephonically. But emergencies have come up, Humphrey said, requiring in-court hearings conducted while social distancing.

Humphrey has come to court every day in Dearborn County, while his magistrate judge has been presiding in Ohio County. He’s been able to keep all of his staff working with the help of some additional laptops and remote-desktop access software.

In Marion County, most judges are working with only two staffers. No staffers have been furloughed, Presiding Superior Court Judge Heather Welch said, but the Indianapolis courts do not yet have the technological capacity to enable all staffers to work remotely.

“In Marion County we work through (the Information Services Agency), so we had to get our laptops from them,” Welch said. “But we weren’t the only individuals asking for that – other government entities were making the same request, so that was something that at the time, the demand skyrocketed, and we could only get so many.”

The hitch, Welch said, is that court staff can only access the Odyssey case management system with a court-issued computer. But, she added, all staff members are still being paid despite the limited technology.

Cale Bradford, chief judge of the Indiana Court of Appeals, thinks the state’s appellate courts were better positioned to make the move to remote work than their trial court counterparts. Through existing technology and the statewide implementation of e-filing, he said appellate judges were already used to accessing briefs and other documents in an electronic format.

Indiana Chief Justice Loretta Rush agreed, noting she has been able to continue weekly conferences with the other four justices despite her being in Lafayette. In both appellate courts, opinions have continued to come down during the pandemic.

Oral arguments, though, pose a bigger hurdle. The Court of Appeals doesn’t hold oral arguments in every case, Bradford noted, because it hands down some 2,000 opinions a year.

But for those cases that do come before an appellate panel, both Rush and Bradford said their respective courts are preparing for remote oral arguments, a move the United States Supreme Court has likewise decided to make.

In a similar vein, Rush signed an order April 22 allowing for the livestreaming of trial court proceedings using platforms such as YouTube. But recording court proceedings is still prohibited under Rule 2.17. Courts using a virtual model must also adhere to Administrative Rule 14.

The Supreme Court’s administrative arm has been particularly busy, Rush said, as it has been working to help trial courts adjust to social distancing. There have been questions about technology, funding and continuity plans as judges look toward reopening the courthouses, so Rush said her team is working to provide the appropriate guidance.

Magnus-Stinson’s Southern District Court is notoriously busy, having one of the highest per-judge federal weighted caseloads in the country.

There has been a slight dropoff in filings during the pandemic, the chief judge noted – 242 civil filings between March 15 and April 15, 2020, compared to 565 during the same period last year. But, she noted, some of the 2019 filings can likely be attributed to a multi-district litigation.

“That means we have a lot to do and plenty to keep us busy,” Magnus-Stinson said of the court’s pandemic operations.

Keeping the Southern District moving despite restrictions has, like in all other instances, been a matter of finding the right technology, Magnus-Stinson said. Very few employees are actually working out of the federal courthouses, and those who do are given personal protection equipment to keep them healthy.

One important facet for the federal court system has been determining how to hold pretrial conferences with detainees. The U.S. Marshals house Southern District detainees in 10 locations across Indiana, Kentucky and Illinois, she said, so arrangements had to be made with each of those facilities.

Outside of judicial proceedings, trial court clerks are also tasked with other public functions such as managing marriage licenses and local elections.

Bartholomew County Clerk Jay Phelps said he tried to use Zoom software to facilitate remote marriage licenses, but he discovered an in-person element was still necessary. So, he developed a modified process.

“We have a barrier between us and the public for safety, and then it’s limited to two hours on Mondays and Wednesdays, and they have to start online,” Phelps said. “It’s 16 applicants per week for 15 minutes, and no family members can come in with them. It’s a changed process, but we still provide the public service.”

The primary election has been another challenge for Phelps’ office, as the Indiana Election Commission chose to postpone from May to June. But he’s used the extra time to promote absentee voting rather than coming into polling centers.

“It kind of adds more cost just with all the materials,” Phelps said, “but it’s worth it for social safety, and we’re encouraged by the amount of people taking advantage of it.”

As businesses worldwide begin to consider plans for reopening, court officials say they see opportunities to continue their technology use in ways they hadn’t considered before.

Welch, for example, said the Indianapolis courts are going to switch to laptops with docking stations instead of desktops. That way, if there were another reason why court offices would have to close, operations could continue seamlessly.

Similarly in federal courts, Magnus-Stinson said she could foresee a situation where bench trials could be conducted via videoconferencing. But, she added, that would depend on what kind of authority courts are given once the national emergency is over.

Humphrey of Dearborn and Ohio counties prefers meeting staff and litigants in person, though he concedes that the future is uncertain.

“The question is, what are the circumstances going to dictate?”•