The city of Lawrenceburg is facing a lawsuit after an organization that serves adults with intellectual disabilities accused the city of discrimination after it prevented the organization from building a supported living home for people with disabilities.

Indiana woman sues over lack of wheelchair access to concert

A woman who uses a wheelchair filed a lawsuit Thursday against a southern Indiana school district because the venue for her child's Christmas show isn't wheelchair accessible.

A northeastern Indiana lawyer who allegedly “terrified” a woman who rejected his romantic advances contends in his resulting attorney discipline case that he had an undiagnosed mental illness. Because of that, he argues that an Indiana Supreme Court sanction against his license to practice law would violate the Americans with Disabilities Act.

The 7th Circuit Court of Appeals affirmed judgment for an employee who claimed the city of Anderson did not accommodate his disability when it fired him for not having a commercial driver’s license he could no longer get because of his diabetes.

The Supreme Court of the United States is taking up a dispute involving deaf people in Texas who say driver instruction schools in the state won't let them take classes needed to get a driver's license.

COA: ADA does not apply in termination proceedings 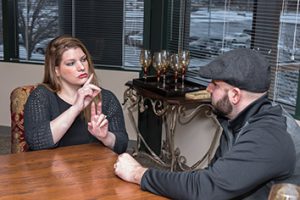 A federal court ruling that a Marion County court discriminated against a deaf man who was denied an interpreter for his court-ordered mediation is being appealed by the state, which argues he lacked standing to bring the suit under the Americans with Disabilities Act and state courts should be immune from such judgments.

Indiana Attorney General Greg Zoeller’s office has appealed a federal court ruling that found a Marion County court discriminated against a deaf man in violation of the Americans with Disabilities Act when it rejected his request for an American Sign Language interpreter at a court-ordered mediation session during his child custody case.

A deaf Indianapolis man was discriminated against when a court denied providing him an interpreter during a mediation session ordered in his child custody case. A federal judge ruled Friday that Marion Superior Court’s decision to deny the interpreter in a court-funded mediation program violated the Americans with Disabilities Act.

US: Clinic discriminated against man with HIV

The U.S. Justice Department says South Bend pain management clinic will pay $20,000 to a person with HIV that it refused to treat to settle allegations of discrimination.

The 7th Circuit Court of Appeals upheld summary judgment for the St. Joseph County court system in a case involving accessibility of the St. Joseph County Courthouse and the Mishawaka County Services Building. The court said many of the plaintiffs’ claims lack standing, while others failed to raise genuine disputes of material fact.