Indiana Secretary of State Connie Lawson said Tuesday in a statement that her office is investigating Johnson County’s problematic electronic poll books and hopes “to determine the root cause of the problem" after the poll books that are used to check in voters before they cast a ballot kept freezing on Nov. 6, stalling several voting machines and preventing some people from voting. 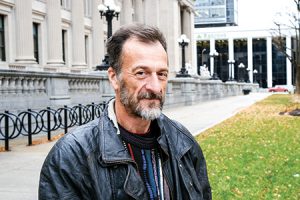 Indiana, like many states, has been amending and enacting new voting laws in the name of stamping out voter fraud. Lawyers and civic organizations are challenging laws and regulations that they believe are restricting the right to vote.

On an election night in which Democrats took control of the U.S. House of Representatives and Republicans appeared to tighten their hold on the Senate, Indiana stayed reliably red, with Republicans winning seven of nine House seats and challenger Mike Braun defeating incumbent Democratic Sen. Joe Donnelly. But in one of the biggest Election Day upsets, longtime Republican state Sen. Mike Delph lost the Statehouse seat he has held since 2005.

The Indiana Court of Appeals reversed a decision granting summary judgment in favor of two companies who purchased real estate in a sale that was voided after the seller was found to have no authority to sell it.

Indiana’s top elections official is planning to use more than $7.5 million in federal funding to improve the state’s election security, but not to upgrade its voting machines. Indiana was among the states and territories to receive money from the $380 million approved by Congress amid ongoing threats from Russia and others.

After Senior Judge Sarah Evans Barker on Thursday afternoon rejected his motion objecting to Marion County’s plan for early voting, Indiana Attorney General Curtis Hill turned to the 7th Circuit Court of Appeals. Hill is proceeding over the objection of Indiana Secretary of State Connie Lawson, whose office is charged by law with election oversight.

In defending the Indiana Attorney General’s objection to an agreement about early voting, Indiana Solicitor General Thomas M. Fisher said the action is “rather routine” and the office would be submitting additional filings to the courts, including an appeal to the 7th Circuit Court of Appeals. The comments came two days after the attorney general filed a motion challenging the consent decree establishing five early voting sites in Marion County.

Indiana Attorney General Curtis Hill is hitting back at Secretary of State Connie Lawson for calling his actions “reckless” but is remaining quiet on the assertion that his motion to derail Marion County’s plan to expand early voting is “premised on a fundamental factual misrepresentation.”

Opposition is rising to embattled Attorney General Curtis Hill’s move to block expanded early voting in Marion County, with Indiana Secretary of State Connie Lawson calling Hill’s action “reckless” and urging him to drop the matter. Under state law, Lawson’s office is responsible for election oversight, and she said Hill did not consult her before going to court.

A constitutional challenge to Indiana Secretary of State Connie Lawson’s reelection bid failed Tuesday after the Indiana Election Commission agreed with a holistic reading of the state constitution. The challenge had argued Lawson is not eligible to run because, if reelected, she will be prohibited from completing a full term under Article 6, Section 2 of the Indiana Constitution.

Three public advocacy groups have temporarily stopped the enforcement of Indiana’s 2017 voter registration law, which could potentially purge eligible voters from the rolls without providing them written notice. Judge Tanya Walton Pratt of the U.S. District Court for the Southern District of Indiana granted a preliminary injunction prohibiting the state from implementing the 2017 version of Senate Enrolled Act 442.

Senate candidate Todd Rokita likely violated ethics laws as Indiana’s secretary of state by repeatedly accessing a Republican donor database from his government office, prompting party officials to lock him out of the system until he angrily complained, three former GOP officials told The Associated Press.

A cease and desist order has been issued against a company not licensed to sell insurance or conduct business in Indiana, according to the Indiana Department of Insurance.

The NAACP announced Thursday it has filed a second lawsuit against Indiana, challenging the state’s newly enacted voting law that allows for the removal of voters from the registration rolls without giving them notice or an opportunity to respond.

President Donald Trump's commission investigating alleged voter fraud in the 2016 elections has asked states for a list of the names, party affiliations, addresses and voting histories of all voters, if state law allows it to be public. Indiana and several other states have said they won't give data to the panel.

The 7th Circuit Court of Appeals has affirmed the dismissal of claims against several Indiana state and county officials, finding that most of the claims failed due to the immunity provided to government employees in the scope of their employment.

With the fear of voter fraud through traditional and electronic methods spreading this election season, cybersecurity experts are telling voters that the risk of their personal information being stolen and used to manipulate the outcome of the election is small, but not nonexistent.

A Democratic-aligned group at the center of an Indiana investigation into possible voter fraud said Thursday it focused on registering black residents of Indiana because the state had the nation's lowest overall voter turnout in 2014.