Faults in the state’s mental health system can’t be used to justify an insanity defense being rejected in favor of a different sentence that will keep a person locked up, an Indiana Supreme Court majority ruled.

Indiana Supreme Court Justice Steven David issued his first decision as a member of the state’s highest court, affirming a life without parole sentence in a murder case out of Hamilton County.

Indiana’s justices couldn’t agree on whether they should even rule on a case involving an athlete’s eligibility in high school when the girl is now playing college basketball.

Justices divided on firearm ‘use’ sentencing

A divided Indiana Supreme Court has held that state statute dictates that the use of a firearm can be the grounds for a sentence enhancement that doesn’t constitute a double jeopardy violation. 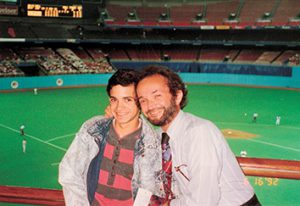 Giving a gift of life

For some, when a family member needs something, there’s no doubt that the right thing to do is step up and give. That was the case with two members of the legal community. 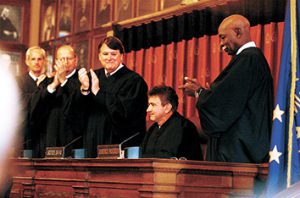 The state now has its 106th justice on the Indiana Supreme Court. Justice Steven H. David officially took his oath and donned his black robe for the state’s highest court today, culminating a process that began with a May announcement that Justice Theodore R. Boehm was stepping down from the bench. Gov. Mitch Daniels chose the 15-year Boone Circuit judge about a month ago.

Delaware County Prosecutor Mark McKinney should be publicly reprimanded for violating four professional conduct rules in his handling of civil forfeiture matters as a private attorney while simultaneously prosecuting those same criminal defendants, according to a hearing officer the Indiana Supreme Court appointed to examine disciplinary charges against the prosecutor.

Supreme Court will have 18-day gap between justices

The Indiana Supreme Court will be missing one of its five members for almost three weeks as its new justice wraps up remaining business on the Boone Circuit Court before taking the appellate bench.