The Boone County Jail will undergo a $59.1 million expansion that officials say will help lead to an increased focus on rehabilitation and less on “warehousing” of inmates.

A central Indiana man charged with murder in connection with the March death of his wife has won a primary election for township board.

A central Indiana man has been arrested after the body of his wife was found in a creek a few miles from their home, police said.

A central Indiana man has been charged with murder in the September slayings of three people found shot to death inside a Lebanon apartment, authorities said.

The clock is ticking for Boone County officials to decide whether they’ll increase local income taxes to pay for a proposed $45 million to $50 million jail expansion and justice center to alleviate overcrowding that leaves many prisoners sleeping in plastic cots on cell floors.

A former Boone County pediatrician convicted on multiple charges of sexual misconduct against his minor patients has lost his appeal of his felony convictions and his consecutive sentences.

A new lawsuit accuses Witham Health Services in Lebanon of negligence for hiring a pediatrician who’d faced criminal sexual misconduct charges during his residency in 2004 and then allowing him to see patients with no one else present.

Man gets life in prison for Indiana deputy’s shooting death

A Lebanon man has been sentenced to life in prison without parole after pleading guilty in the fatal shooting of a Boone County sheriff's deputy.

A Boone County pediatrician charged with sexually abusing three boys has had his medical license suspended for another 90 days. The Indiana Medical Licensing Board originally suspended 41-year-old Dr. Jonathon Cavins’ medical license in March for 90 days, until mid-June, but the board recently added another 90 days to the Jamestown man’s original suspension, meaning he’ll remain suspended until after his July trial.

A central Indiana pediatrician charged with sexually abusing three boys has voluntary surrendered his medical license for 90 days. Attorney General Curtis Hill announced Thursday that his office has reached an agreement for the surrender with attorneys for 41-year-old Dr. Jonathon Cavins of Jamestown.

A northwestern Indiana man has been charged with felony neglect after police say a 3-year-old boy fatally shot his 4-year-old sister with the suspect’s gun in the family’s home.

The man charged with fatally shooting a central Indiana sheriff’s deputy said he had “no remorse” Wednesday as he was led into a courthouse for his initial hearing.

Longtime Lebanon attorneys are remembering James P. Buchanan Sr. as a friendly, scholarly colleague who left his mark on the Boone County community.

Authorities say a man who was arrested last month in a 1990 attempted rape case in central Indiana has died after leading law enforcement on a chase.

The Lebanon Police Department has arrested a man in a 26-year-old attempted rape case after a state lab was able to link him to the crime. 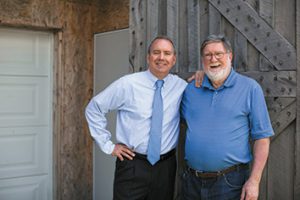 Speaking recently to a group of students at Indiana University Maurer School of Law, Lebanon inventor Larry Durkos and his son, Duane, told their story of battling the biggest giant in the bedding industry and winning.