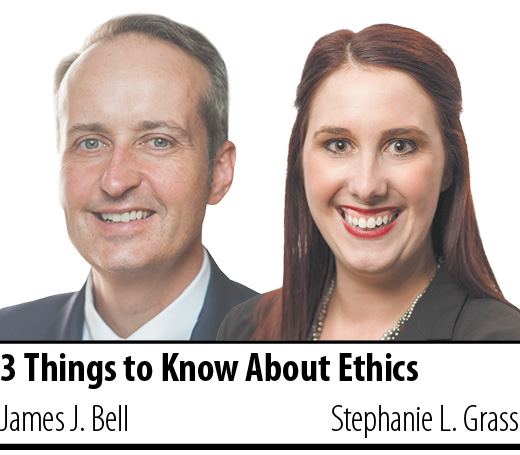 Because our parents (who have trouble with remote controls) are now officially on Facebook, we can safely assume that close to all attorneys are using social media. Using social media is simply an inexpensive and convenient way to get the word out about your law firm. However, there is an element of risk that comes along with an attorney’s use of social media. These risks were highlighted in July, when the Indiana Supreme Court Disciplinary Commission listed social media’s many “minefields” in its third ever advisory opinion: Third Party Comments or Tags on a Lawyer’s Social Media. We address some of these warnings and share other cautionary tales in the following article.

1. If you can’t say something ethically, then don’t say it to the world on social media

Lawyers have been sanctioned for making impermissible statements on social media that would have also been sanctionable if the statements had been made in person. For one, a Nevada attorney received a six-month suspension from the practice of law for violating Nevada’s Rule 8.4(d) for posting public comments on Facebook accusing a judge of bias and religious discrimination. Matter of Discipline of Hafter, 406 P.3d 23 (Nev. 2017). In another matter, an Indiana lawyer received a 30-day suspension from the practice of law for sending a threatening and obscene private social media message to a client’s ex-husband in violation of Rules 4.4 and 8.4(d). In re J.H., 53 N.E.3d 412 (Ind. 2016).

In the above cases, the attorney would have presumably been sanctioned whether or not the attorney’s statements were made on social media. The use of social media, though, made the statements more easily provable and widely available. However, the latest advisory opinion from the Disciplinary Commission shows there are times when the format of social media itself can cause an ethical issue for an attorney.

2. Adopting a third-party comment can lead to a violation

Unlike statements made in “normal life” (if there is such a thing anymore), statements on social media allow for third parties to contribute comments. What happens if the comments violate the Rules of Professional Conduct and the attorney “likes” or otherwise adopts these comments? According to the Disciplinary Commission, “[a]n attorney who responds to or ‘likes’ a third party’s comment that contains prohibited content could be deemed to have adopted the third-party comment. Such action could subject the attorney to a rule violation. The failure by the attorney to delete prohibited content could be considered acquiescence and expose the lawyer to discipline.” Advisory Opinion #1-20 at p. 2. The advisory opinion also advised that a “lawyer should also be careful to adjust privacy settings to avoid being ‘tagged’ to improper content which could show up on the lawyer’s page and thereby be deemed adopted by the lawyer.” Id.

It is unlikely that a lack of tech savvy will provide an excuse. Comment 6 to Rule 1.1 requires a lawyer to be well-informed of the “benefits and risks associated with technology relevant to the lawyer’s practice … .” Based on a lawyer’s duty to supervise nonlawyer assistants under Rule 5.3, it is also unlikely that “my outside marketer did all this” will fly as a defense. So be careful with those “likes” and “retweets,” and make sure you aren’t endorsing prohibited content like the statements mentioned above. Finally, make certain that an attorney is monitoring your firm’s social media platforms.

3. Prosecutors must be especially careful with social media accounts

The Disciplinary Commission’s advisory opinion also noted that “[p]rosecutors have the dual responsibility of keeping the public informed” and, under Rule 3.8 of the Indiana Rules of Professional Conduct, a duty “to ‘refrain from making extrajudicial comments that have a substantial likelihood of heightening public condemnation of the accused’ which could affect the due process rights of criminal defendants.” Advisory Opinion #1-20 at p. 3. Therefore, the advisory opinion also warns that “[a]llowing public comment to these posts adds an additional risk to the reputation and rights of the defendants.” Id. In other words, a third party’s statement could theoretically make a prosecutor’s ethical statement in a post suddenly problematic. This is more reason to have an attorney monitor any social media activity, including the comments. The commission suggests that for prosecutors’ social media accounts, it is “best practice to simply disable comments on posts regarding pending criminal matters all together.” Id.•