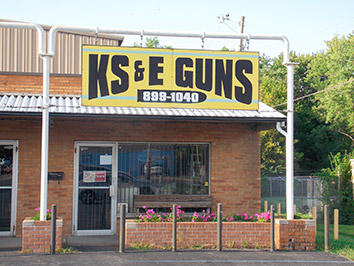 A gun store’s possible liability for making a straw sale of a handgun that wounded an Indianapolis police officer is a matter of first impression for Indiana and a case watched closely for legal and policy implications nationwide.

Lawyers for the gun store argued to the Indiana Supreme Court Aug. 31 that Indiana gun sellers are shielded from civil lawsuits even when they break the law. An attorney for the officer countered that such a reading of the law would lead to absurd results.

“The General Assembly made that decision. It drew that bright line because it wanted to reach that legislative goal,” argued Chicago attorney James Vogts, who represents the National Shooting Sports Foundation. That group is a friend of the court supporting the KS&E Guns store in defense of a lawsuit brought by Indianapolis Metropolitan Police Department officer Dwayne Runnels.

Runnels was shot in 2011 by Demetrious Martin, a suspect in a separate shooting and robbery. Runnels returned fire, killing Martin, whose gun was traced to its purchase from KS&E in Indianapolis a couple of months prior.

A felon, Martin could not have purchased the gun, but KS&E sold it to Tarus Blackburn after he and Martin visited the store together, where Martin told store personnel it was the weapon he wanted. Blackburn later bought the gun and sold it to Martin in the store parking lot for a $50 markup. Blackburn subsequently pleaded guilty to falsifying documents to buy the gun.

Justices Steven David and Robert Rucker asked Christopher Renzulli, who also argued for KS&E, whether a gun dealer who knowingly sold guns to someone to supply to a terrorist or someone intent on mayhem could ever face civil liability under KS&E’s reading of the law.

Such scenarios represented the “ultimate extreme,” Renzulli said, but he acknowledged his client’s position — there would be “no exception” in the immunity statute even if a gun sale was illegal.

“The plain language of the statute requires immediate dismissal of this case,” Renzulli said. He said to read the statute otherwise would “eviscerate” its purpose.

Runnels sued KS&E claiming negligence, conspiracy and public nuisance while also seeking to pierce the corporate veil. A trial court denied the gun dealer’s motion for judgment on the pleadings, leading to this interlocutory appeal after a divided Court of Appeals affirmed.

KS&E’s primary defense is Indiana Code 34-12-3-3(2). Passed in 2004, the immunity statute aimed to shield gunmakers and sellers from civil liability. But the majority of an Indiana Court of Appeals panel ruled in Runnels’ favor in March, holding the law doesn’t provide immunity to gunmakers or sellers from lawsuits resulting from their own unlawful acts.

The statute “must be construed the way the Court of Appeals construed it,” argued Jonathan Lowy of the Brady Center to Prevent Gun Violence in Washington, D.C., who represented Runnels. Lowy told justices that reading the statute as KS&E suggests to shield gun dealers from liability for criminal acts would produce an absurd result, derogate common law, overturn 130 years of precedent, and potentially deprive Runnels of his constitutional rights. He said under KS&E’s reading, gun sellers would be protected “even if their business model is supplying guns to criminals.”

Merrillville attorney Shana Levinson authored an amicus brief in this case that pointed up the interests of police and cities beset by gun violence. Her brief represents the views of the International Brotherhood of Police Officers, the Major Cities Chiefs Association, and the city of Gary.

“Felons prohibited from owning handguns kill more police officers than any other demographic,” the brief says. “The guns they use, more often than not, begin at a legal source and are often purchased by a straw purchaser. … Indeed, firearms purchased from legal sources, like firearm dealers, kill more police officers than any category of firearms.”

The brief argues that KS&E’s contention that state law shields gun sellers from liability, even for illegal straw sales, is “dangerous and misguided. … No rational legislature would incent straw sales and make harm to its law enforcement agents more likely. Yet that is the upshot of this appeal.

“By selling the firearm to Martin and Blackman in an illicit straw sale, black letter law dictates that KS&E may as well have pulled the trigger,” the brief says.

Vogt argued to the justices that shielding gun sellers and manufacturers was “a policy decision (the General Assembly) had the authority to make, they had to the right to make, and they did make it.”

Chief Justice Loretta Rush focused on other charges in Runnels’ complaint, such as nuisance and conspiracy, implying these should not be read out of immunity statute. Justices Mark Massa and Geoffrey Slaughter raised the most questions for Runnels’ counsel, Lowy.

Massa said Runnels doesn’t have a claim for damages until the gun is criminally misused, and the law says a person cannot maintain an action against a gunmaker or seller. “How is that not clear?” Massa said.

Lowy said suits for the criminal actions of a seller aren’t specifically barred, and reading the law so would raise “serious constitutional issues” for victims such as Runnels.

Straw sales are a leading source of guns for criminals, the amicus brief in support of Runnels asserts, noting that Indiana is the largest source of guns used in crimes in Chicago, where there were 203 homicides and 1,187 shootings in the first half of 2015. The brief says one Indiana dealer was the source of more than 500 crime guns recovered in Chicago in a single year.