Getting into debt is easy, but people who fall behind in payments can find themselves fending off aggressive debt collectors, acquiescing courts and even incarceration.

The American Civil Liberties Union examined debt and its consequences in the United States in its recently released report, “A Pound of Flesh: The Criminalization of Private Debt.” It found abusive practices and even illegal acts being employed by private collection agencies, state courts and local law enforcement to threaten and coerce payment.

Often, the debtors are people living on the margins who struggle to provide the necessities. But when in court, usually unrepresented and unaware of their rights, their income can be garnished and their property seized to satisfy the original debt as well as interest and fines that typically are tacked on.

“In reality, private debt collectors — empowered by the courts and prosecutors’ offices — are using the criminal justice system to punish debtors and terrorize them into paying even when a debt is in dispute or when a debtor has no ability to pay,” the report stated.

Although it looks at the problem on a national level, the report includes several references to Indiana and what has happened to defendants in the Hoosier state.

A disabled Perry County man was told he would go to jail if he did not pay $25 a month on past-due rent. A Lake County cancer patient with unpaid medical bills was arrested at her home and taken to the local jail where she was placed in holding cell with men. Moreover, the arrests have added to the financial burdens some on Hoosiers. A woman was fired from her job after she was arrested at work and a man was passed over for a job because he had an open arrest warrant for an unpaid school textbook fee.

Indiana Legal Services records hundreds of cases statewide that fall into debt collection. Jon Laramore, executive director of ILS, called it a systemic issue, caused, in part, by the huge collection dockets that dominate some courts. Defendants do not appear and courts issue judgments to creditors without examining the merits of the case.

“It’s not unique to Indiana,” Laramore said, “but it’s difficult for unrepresented debtors to defend themselves in court because many of them (the courts) are set up to be collection mills.”

Attorneys say Indiana residents are particularly vulnerable to abuse because of the state’s lax trial rule on service and judges who are not familiar that certain types of income are exempt.

Under the Indiana’s trial rules, a copy of the summons may be left at the defendant’s home but, lawyers have seen, papers served to an old address with some being rubber-banded to the door knob or found in the bushes. Even the additional requirement that the summons and complaint be mailed only mandates the documents be sent to the last known address.

The result is that the consumers may have no idea they are being sued until they receive a post-judgment order to appear in court.

Robert Duff, attorney with the Indiana Consumer Law Group/The Law Office of Robert E. Duff, pointed out the defendants can get the default vacated if they can show they were not properly served. But without a lawyer, they may not know how to contest the judgment.

The continuing problem, he said, is people being served at the wrong address.

A woman who turned to the Indianapolis Legal Aid Society for help underscored the fallout from a default judgment can be severe. According to staff attorney Rick Dyar, the client had moved out of her apartment in 2010, giving 60 days’ notice she was leaving early and allowing the landlord to keep the deposit.

Unbeknownst to her, she was sued and found to owe $850 plus $450 for attorneys fees plus 8 percent annual interest. The client learned of the judgment only when her employer sent notification that someone was attempting to garnish her wages.

At the time she talked to Dyar, she was living in a shelter. Apartments were turning down her applications because of the judgment. 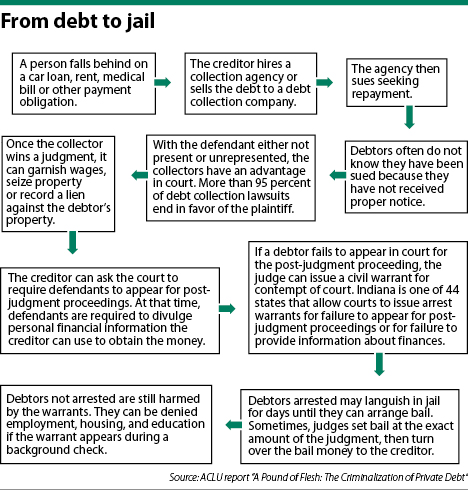 The ACLU report discovered that even though Congress abolished debtors’ prisons 175 years ago, the “relic of the Dickensian past,” is still present in America today. Indeed, Indiana is among the 44 states with laws allowing courts to issue arrest warrants, not for unpaid debt, but for failure to appear for post-judgment proceedings or for not providing personal financial information.

Not only are the consumers told to cover the bounced check, but they usually also must pay for fees and financial management classes. The prosecutors’ offices generally receive half of the administrative fees. According to the ACLU report, Indiana prosecutors in Allen, Boone, Delaware, Gibson, Greene, Hendricks, Lake, Marion, Noble, Porter, Vanderburgh and Vigo counties have contracts with check collection companies.

Both Laramore and Duff said the flood of debt collection lawsuits into some courts is creating bias against the defendants. Judges and court personnel, constantly seeing the creditors’ attorneys, are developing friendly relationships and giving them the benefit of the doubt.

Sometimes courts will provide additional help to the collection agencies. Duff recalled several years ago seeing a court employee ask the debtors to write down their names, addresses and bank account numbers. Perhaps thinking the court was wanting the information, the consumers complied but, instead, the data was turned over to the agency’s attorney who used it to garnish wages.

“I do see the courts catering to debt collectors and not scrutinizing their filings with regard to default judgments and summary judgments,” Duff said.

Laramore also noted some courts are working through these cases very quickly. When the defendant is unrepresented, he said, the courts “need to be patient and listen to their stories.”

In the 2011 Branham and Branham v. Varble and Chastain, the Indiana Supreme Court reminded the trial courts they cannot garnish exempt income or order defendants to apply for jobs. In the 2009 Button v. James, the Indiana Court of Appeals needed just four pages to admonish the trial judge in the Perry County case for improperly threatening imprisonment and imposing an arbitrary payment schedule.

Also, just last week, the Court of Appeals again reversed a summary judgment in favor of a creditor in Holmes v. National Collegiate Student Loan Trust, 87A05-1711-CC-2517. The creditor could not prove it owned the debt.

All the defendants in the above cases were represented. If a consumer does not have an attorney or does not assert their rights, they could have their money and assets taken. Laramore said many people who find themselves in debt are the working poor, and when they get a default judgment, that usually means they will have less resources to buy food and medicine.

The report did make several recommendations to stop what the ACLU considers to be due process, equal protection and human rights concerns.