In March, as the national #MeToo movement was gaining momentum, Gov. Eric Holcomb ceremonially signed a bill that called for strengthening the Indiana General Assembly’s policies against sexual harassment.

But by the time the Legislative Council approved the updated policy Nov. 20, Indiana Attorney General Curtis Hill and House Speaker Brian Bosma had both been accused of sexual misconduct, and the governor as well as the bill’s author declined to comment on the finished product.

The new proposed policy is being sent to the House and Senate ethics committees for further review before it lands in both chambers for a full vote. Even so, questions linger over whether the recommendations will change behavior and protect potential victims.

But critics are not sure the proposal does all that it could.

“They met the minimum requirements of what was asked of them,” said Gabrielle McLemore, communications director for the Indiana Senate Democrats, and one of four women who accused Hill of groping them. “But given everything that’s happened since that bill was passed several months ago and what’s happened with all of us, I think they really missed a really important opportunity to include a lot of things that could have helped a lot of future cases similar to this one.”

Also, the ethics committees would be given authority to investigate sexual harassment complaints, and a reporting procedure would be prescribed for the House and Senate. Further, the amended ethics language would specifically define “sexual harassment” as “unwelcome sexual advances, requests for sexual favors, and other verbal, nonverbal, or physical conduct of a sexual nature by a member” when such conduct is based on a quid pro quo employment expectation or creates a hostile work environment. The suggested revisions would also prohibit retaliation and protect confidentiality with language that tracks Equal Employment Opportunity Commission guidelines.

According to Sullivan, the goal of the process was to develop policies for lawmaker-on-lawmaker harassment. Existing personnel handbooks cover the process for responding to complaints among legislative employees, Sullivan said, but there was no prescribed process for legislators to follow.

But the fact that the policy is tailored to lawmakers concerns Jennifer Drobac, an expert in sexual harassment law and professor at the Indiana University Robert H. McKinney School of Law.

“What if the offending harasser is an aide to a legislator or the Attorney General or a constituent? Do the legislators not have a duty to protect their legislative staff and unpaid workers whether or not the accused is a legislator?” Drobac said in written comments to Indiana Lawyer.

Similarly, Rep. Mara Candelaria Reardon, a Munster Democrat who has publicly identified herself as one of the women who claim to have been groped by Curtis Hill, questioned the scope of the policy during the Legislative Council’s Nov. 20 meeting. Reardon, who is a member of the council, asked whether the policy would provide protections for lawmakers who are harassed by third parties or other “constitutional office holders,” hinting at Hill, who is an elected official.

In response, LSA executive director George Angelone said the policy recognizes that the General Assembly has a duty to protect a lawmaker from future harassment if that lawmaker reports harassment by a third party. Speaking before the unanimous council vote, Reardon said she views the policy as a first step toward strengthening the Legislature’s response to sexual harassment and said she hopes further legislative review will yield specific consequences for misconduct.

Reardon and McLemore spoke after the proposed policy was approved. They were joined by Hill’s two other accusers, Niki DaSilva, legislative assistant for the Indiana Senate Republicans, and Samantha Lozano, legislative assistant for the Indiana House Democrats, and attorney Hannah Kaufman Joseph of Katz Korin Cunningham, who is representing the four accusers.

In particular, the women questioned whether the recommendations actually did include best practices, and they pointed out that the proposal does not provide any consequences for inappropriate conduct. Instituting a policy that does not have any mechanism for addressing bad behavior will not prevent others from doing the same wrongful acts, they said. 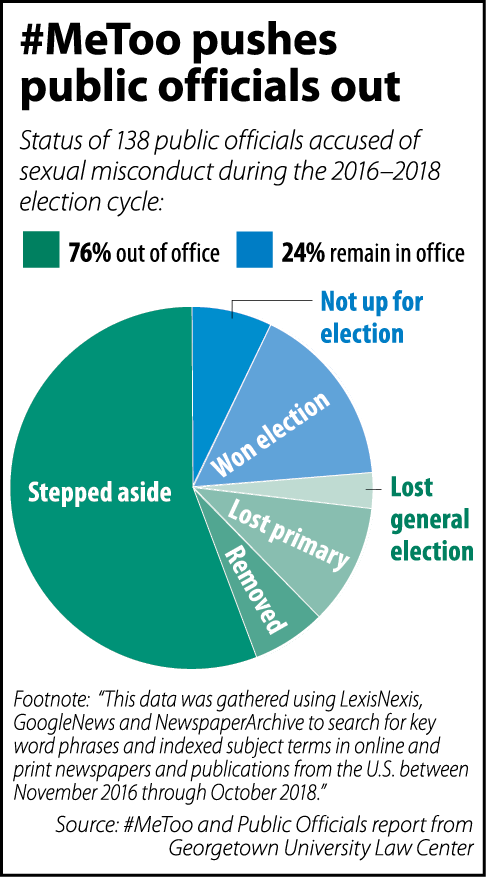 Instead, the women believe having a stronger, more comprehensive anti-sexual harassment policy is a key element to bring systemic change.

“I think the policy is the first step to changing a culture,” Reardon said after the vote. “You let people know what’s acceptable behavior and what’s not. We can’t do that if we don’t have a policy in place that lets people know what is acceptable and what isn’t.”

Drobac also expressed concerns about whether the policy’s definition of “sexual harassment” is broad enough to protect lawmakers from sex-based harassment. Calling the recommendations “shockingly dated — very 20th century in (their) approach,” the law professor said sex-based harassment is different from sexual harassment because the former includes “sex-based and gender-based hostility, including gender policing and violence.” She pointed to the 1993 case of Harris v. Forklift Systems, Inc., 510 U.S. 17, in which Justice Ruth Bader Ginsburg addressed “whether members of one sex are exposed to disadvantageous terms or conditions of employment to which members of the other sex are not exposed.”

“Surely, Indiana should enter the 21st century and provide a comprehensive definition of sexual harassment,” Drobac wrote to IL. “If not provide a model for other states, it should at least conform with (the) 1993 understanding of the federal law.”

At least eight other states, including Alabama, Delaware and Massachusetts, passed bills that established committees to review and recommend changes to statehouse sexual harassment policies and that call for specific training on appropriate behavior.

But rather than anti-harassment policies, the reckoning for legislators may come at the ballot box.

A report released in November by Georgetown University Law Center, "#MeToo and Public Officials: A post-election snapshot of allegations and consequences," found 76 percent of public officials who had been accused of sexual misconduct between November 2016 and October 2018 were ousted from office. Of the 138 elected and appointed government officials in the study who faced allegations of inappropriate sexual behavior, 104 either resigned, were removed or lost the next election.

The report’s author, Georgetown associate law professor Jamillah Bowman Williams, noted the study does not prove a causal relationship between being accused and leaving the public sector. Even so, she said it does show that allegations against government officials have spiked during key events in the #MeToo movement.

Williams also emphasized the numbers in her report are just the “tip of the iceberg.” The 138 individuals — all but three of whom were men — were not the only public officials engaging sexual misconduct. They were just the ones whose cases have been publicized.

“I wasn’t surprised because I didn’t think this type of sexual misconduct is anything new, but the amount of accountability is unprecedented,” Williams said of the report’s findings.

However, the results of the 2018 general election showed that if the accused won the primary and got on the November ballot, chances are they were re-elected. While 27 elected officials were tagged with sexual misconduct allegations going into the election, 23 were returned to public office.

To make lasting change, Williams said the public must continue to hold officials accountable and legislatures must enact laws pertaining to harassment and gender equity. Systems for reporting inappropriate behavior should be straightforward and complaints should be handled in a timely manner, she said.

“We need a broader culture change to really lead to a lasting social and political change,” Williams said. “We need … more people speaking up.”•