In today’s legal market, lawyers are forced to expend significant effort on business development. While some lawyers have found creative ways to attract new clients, others have entered into business relationships that have landed them in ethical hot water.

The Indiana Supreme Court Disciplinary Commission addressed such questionable relationships in an advisory opinion that cautions Hoosier attorneys against “license rental” partnerships with out-of-state law firms or non-lawyer service groups. Through these partnerships, Hoosier attorneys lend their services to the out-of-state firm or non-lawyer group in exchange for a fee paid for limited client representation in Indiana.

The allure is monetary — that is, lawyers see an opportunity to bring in additional revenue through these business relationships. But the advisory opinion warns that license rental agreements could actually harm a lawyer’s practice by putting their law license in jeopardy.

“Such offers may be attractive as a means of expanding the lawyer’s practice in Indiana,” the commission wrote in its opinion. “… However, the common feature of this business model is that the non-lawyer company or out-of-state law firm wants to offer legal services in Indiana on an ongoing basis without being licensed in Indiana.”

Joining forces with such unlicensed attorneys or service groups exposes Hoosier attorneys to several potential ethical violations, the commission warned. Those risks are demonstrated in multiple lawyer suspensions imposed in recent years on Indiana attorneys who have entered into license rental agreements, usually to the detriment of clients.

“This issue has presented itself multiple times over the last three to four years,” G. Michael Witte, executive director of the commission, said. “And it’s not unique to Indiana.” 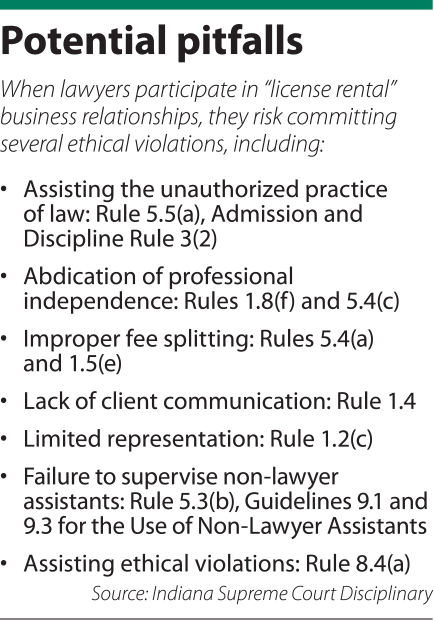 The frequency of license rental disciplinary actions in recent years is what prompted the commission to issue its nonbinding advisory opinion Dec. 11, Witte said. Generally, the out-of-state firms that solicit services from Indiana attorneys do so to avoid having to pass the Indiana bar exam or obtain pro hac vice status on an Indiana case, he said.

Similarly, non-lawyer service groups generally solicit legal services from attorneys as a way of bringing in revenue for the company, with little regard for the quality of client service, Witte said.

Often, out-of-state firms or non-lawyer groups will ask Indiana attorneys to serve as local counsel and enter an appearance on behalf of clients in an Indiana court, Witte said. Clients are generally assigned to the local counsel via relationships formed by non-lawyer assistants, and the local counsel are paid a “nominal amount” to put their name on the case, he said.

According to the commission, this type of business model exposes Hoosier attorneys to seven potential ethical pitfalls:

• Assisting the unauthorized practice of law;

• Failure to supervise non-lawyer assistants, and;

Indeed, such violations have resulted in discipline for multiple Indiana attorneys in recent years. In In re Dilk in 2014, for example, the respondent was found to have violated nine Indiana Rules of Professional Conduct for accepting foreclosure clients from an Ohio-based LLC and allowing judgment to be entered against those clients in Indiana without actually defending the clients.

A case out of Florida, In re Westerfield, involved an Indiana attorney disciplined for violating Florida ethics rules by partnering with a non-lawyer marketing representative and asking Florida attorneys to put their names on her cases. Divina Westerfield was not licensed to practice in Florida, but she used the names of Florida attorneys to maintain a business in the Sunshine State.

Last December, In re Mossler involved a lawyer whose attorney trust account was overdrawn because of his work with a Nevada-based non-lawyer corporation. And in June 2018, the respondent in In re Crosley failed to adequately supervise a non-lawyer representative of a Texas-based law firm he was working with, resulting in the non-lawyer assistant entering an appearance on behalf of two Tippecanoe County clients.

These and other similar Indiana discipline cases have often resulted in 180-day suspensions without automatic reinstatement, though other cases, such as Westerfield’s 18-month suspension, have been more severe, and some have been more lenient.

The prevalence of license rental business relationships seems to be an offshoot of the increasingly competitive nature of today’s legal market, ethics experts say. Greenwood ethics attorney Patrick Olmstead noted that many non-lawyer groups offer one-size-fits all legal solutions, which, while not necessarily effective, can be attractive to clients seeking fast and cheap solutions.

New attorneys, solo practitioners and lawyers who appear to be underworked are likeliest to be targeted for a license rental business relationship, Olmstead said. They are also likeliest to agree, largely for financial reasons.

Among the most common legal service providers lawyers will affiliate with are Avvo and LegalZoom, companies whose existences serve as the source of much ethical debate. While Avvo and LegalZoom aren’t exactly the kind of groups considered by the commission’s most recent advisory opinion, Steven Badger, chair of the Indiana State Bar Association’s Legal Ethics Committee, said those companies’ business models are “getting within the neighborhood” of conduct warned of in the opinion.

Badger praised the commission’s opinion as an educational tool that can help Hoosier attorneys proactively guard against ethical missteps. The opinion is the second piece of “formal” ethics advice the commission has offered since it launched a new ethics program in April.

Through that program, the commission also offers informal advice based on specific attorney questions. Requests for informal guidance are submitted via the Indiana Courts Portal.

Generally, Witte said ethical questions from attorneys are answered within one day. As of Dec. 17, the commission had received 66 ethical inquiries since it began offering the informal advice in April.•