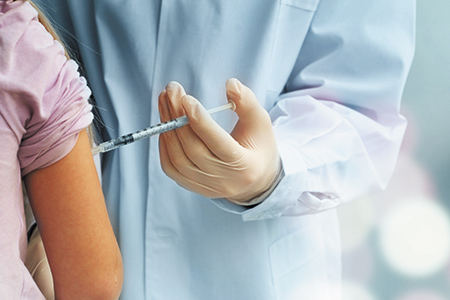 Nobody likes rolling up their sleeve and getting a shot. But just about everybody has an opinion on whether that shot is necessary.

The arguments for and against vaccinations have grown in the national conversation as 12 states are currently battling an outbreak of measles. Medical professionals link the outbreak to the number of people who do not get the prescribed immunizations, while those opposed to vaccines question the safety and heath benefits of the inoculations.

A recent Indiana trial court decision in a custody dispute demonstrated that disagreements over vaccinations also happen within families.

An Indianapolis mother, S.W., and father, J.B., entered into an agreed decree of paternity that included a special provision for vaccinating their child. While the mother was allowed to make major medical, religious and educational decisions in consultation with the father, the agreement stipulated that the child had to be vaccinated if she attended a school that required immunizations.

The mother resisted the vaccination mandate, and ultimately the Indiana Court of Appeals held her in contempt. But the mother persisted by taking the child to a Dr. Fetters, who, according to court documents, does not follow traditional standards of care and did not believe the child should be vaccinated.

The father was not aware of the appointment with Fetters until he read it in the court pleadings.

Solo practitioner Darryn Duchon, who represented the mother in this case, is seeing more disputes over vaccinations. Typically, one parent does not want the children inoculated because of concerns the injections may cause more harm than good.

Feuding couples might find common ground, Duchon said, by limiting the vaccines to those they mutually agree are necessary. Absent that, they might go to court and have their respective experts try to convince the judge.

In the Indiana case, the parents returned to Marion Superior Court and presented their cases. The father offered testimony from board-certified pediatricians, while the mother relied on Fetters and Dr. Toni Bark, who opined that the results of a 23andMe genetic screening indicated the child should not be vaccinated.

Judge Heather Welch found the mother had “knowingly and willfully” violated the Court of Appeals’ order. In addition, the trial court denied the mother’s motion to modify the agreement that gave the father sole legal custody for vaccination decisions.

The father’s attorney, John Maley, partner at Barnes & Thornburg LLP, said he is not surprised the trial court was not swayed by the mother’s experts. Rather than believe what Maley called “junk science,” the court found the father’s experts to be reliable and their opinions to be based on science, he said.

Two custody cases from Michigan mimic the Indiana dispute in that the mothers refused to vaccinate their children.

In one instance, the mother was jailed for five days for contempt for ignoring a court order to have her son immunized. As part of the other case, the court was unconvinced not only by the mother’s claim that she had a religious objection, but also by her claim that a 23andMe genetic test indicated she and her relatives have autoimmune disorders that meant the vaccines could injure her child.

Apart from divorce disputes, Maley speculated that civil litigation over vaccinations will grow. As the percentage of children not immunized increases, people may file more civil lawsuits against parents who do not vaccinate.

Dorit Rubinstein Reiss, a professor of law at UC Hastings College of Law in San Francisco who has studied the vaccination debate extensively, also sees a change coming in regard to litigation. In particular, Rubinstein Reiss has noticed the anti-vaccination movement putting more money into court battles, attacking the science behind vaccines.

If the anti-vaccine group can chip away at the confidence in the science, then courts might see a constitutional right to refusing a vaccination, Rubinstein Reiss said. But to date, the judicial system has not been receptive to their constitutional arguments or their science strategy. The courts are continuing to hold that under the Constitution, people have a right to stay healthy.

As Rubinstein Reiss explained, “You don’t have the constitutional right to give me measles.”

Indiana requires that children enrolled in an accredited elementary or high school be immunized against a variety of diseases, including measles, polio, mumps, hepatitis A and B and meningitis. In 2005, the Legislature adopted a religious exemption.

Indiana Code section 20-34-3-2 holds that a student may not be required to undergo any immunization when the child’s parent objects on religious grounds. The objection must be made in writing, signed by the parent and delivered to the teacher or individual who might order the immunization.

Attorneys for the parents in the Indiana case see different problems with the state religious exemption statute. Duchon believes the statute is a little ambiguous and would like clarity as to whether one parent can submit the exemption or if both parents are required to do so. Maley would like parents to have to do something more than just submit a form.

“Statutes on religious exemptions vary across the country,” Maley said. “This case shows that it is perhaps too easy in Indiana, and many other states, for a parent to simply claim a religious exemption by filling out a form and without any affirmation under oath.”

Rubinstein Reiss and North Carolina vaccine-exemption attorney Alan Phillips cautioned against putting the courts in the position of ruling on theological doctrine. The central issue in the exemption is not whether the faith sees vaccines as contrary to its principles, Phillips said, but rather if the belief of the person is sincere. Even if the religion does not have any problems with inoculations, all that matters to support the exemption is the sincerity of the individual’s belief.

Phillips carried that argument a step further. Devoting his entire practice to helping only people who do not want to be vaccinated, he argued exemptions crafted by legislatures are the exceptions to having the court determine the best interest of the child.

The statehouses, Phillips said, have studied the issue and found that allowing some people to opt out of vaccinations will not affect the public health. Therefore, the courts cannot rewrite the statute and revoke the exemption.

“It is my position in these cases, generally, that courts don’t have the authority to rule on the issue beyond looking at the fundamental matter of whether somebody has an exemption or right to an exemption,” he said.

In the Indiana case, the mother claimed a religious exemption when the child enrolled in public school. She is an Episcopalian, and even though, as the Court of Appeals pointed out, the religion has no tenet against immunizations, the trial court found the mother’s personal theological beliefs to be sincere.

However, the appellate panel reversed the lower court and agreed with the father that the mother was in contempt for circumventing their paternity decree.

“Whether or not Mother would otherwise be entitled to invoke a religious objection to vaccinations, she is not entitled to do so here where she is subject to a court order approving an agreement she willingly entered into that required vaccinations under these circumstances,” Judge L. Mark Bailey wrote for the court.•