Brenda Davis and Franci Gartin know a home can be a place to rest from the struggles of daily living.

The two Indianapolis women were settled into their houses, arranged and as welcoming as they each wanted. But then the struggles of the outside world invaded, and they found themselves in danger of losing their own domiciles.

Davis lost a few paychecks when holiday vacations and snow days meant she did not work — and consequently did not get paid — in her job as a school cafeteria cook. Gartin got cited by the Marion County Public Health Department for code violations related to the upkeep of her residence.

Both women were able to prevent the worst from happening because of the help they received through two different housing programs at Indiana Legal Services and Indianapolis Legal Aid Society. ILS got Davis a little time so she and her family could voluntarily move out and avoid having an eviction stain her credit report. ILAS was a calming presence that enabled Gartin to clean and declutter so her home could become compliant.

Davis and Gartin use the word “blessing” to describe their legal aid attorneys.

“I tell people, ‘If you have four walls, a ceiling and a door, you have everything because out here is the world, whatever you’re going through in the world, (but) once you cross that threshold, that’s your time, that’s your peace,’” Davis said. “So having a home is very important because stability begins there.” 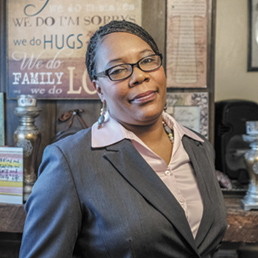 Davis, 52, was helped through the Eviction Avoidance Project at Indiana Legal Services. The program was launched in October 2018 with a $50,000 grant from the Indianapolis Bar Foundation and has, so far, represented 130 clients, already exceeding its goal of 110 over the course of a year.

Jay Chaudhary, managing attorney for the ILS Indianapolis office, developed the EAP using a right-to-counsel model. Previously for people facing evictions, the legal service agency could offer little more than advice and point to some resources within the community that might provide additional help. Now, with the project, eligible individuals in danger of getting kicked out of their residences have an attorney represent them and advocate on their behalf.

Clients are referred to EAP through a network of social service providers and government agencies such as food pantries, township trustee offices and the Marion County Probation Department. Almost all of the clients — most of whom are single mothers — had a hiccup in their employment and fell behind in rent payments.

Michael Hurst, an ILS senior attorney who works solely with EAP clients, typically tries to negotiate either a pay-and-stay arrangement, where the tenant can make a series of payments to cover overdue rent, or a voluntary move-out, with the resident vacating without the landlord having to go to small claims court to get a possession order.

“One of the things this project has done that surprised me, as well, is that it empowers our clients,” Hurst said. “Whether they win or lose these cases, they feel more like they’re mainstream than in the margins.”

Chaudhary surmised EAP may be the only right-to-counsel program in the country that takes referrals from community organizations to help individuals and families avoid evictions. In addition, he said, EAP shows the power of effecting change at the margins by enabling single households to have a soft landing and stop the adverse consequences of a forced displacement from rippling into other aspects of their and their children’s lives.

Still, finding another affordable place to live can be tricky. Aimee Patras, an IUPUI social work student who is interning with EAP, said finding housing for low-income individuals is like a “complicated puzzle” because the supply of homes and apartments that are safe, clean and habitable is limited.

Although she did have to find a new place to live, Davis does not blame her former landlord. It was business, she said, but without the assistance from ILS, Davis believes she would have lost her furniture, her clothes and probably her job because she had no place to go and no place to store her belongings.

Today, the grandmother of 12 is working as a cook and bartender in downtown Indianapolis. Also, she has returned to her studies at the John H. Boner Community Center and the Indy Chamber to prepare herself for opening her own restaurant, which will serve southern cuisine with a pinch of creole.

“It was a blessing in disguise,” Davis said of her experience, “because I learned something, and knowledge is power.”

Aid from an ‘old friend’ a ‘game changer’ 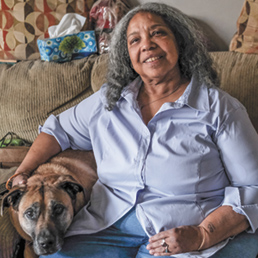 Gartin, 69, received assistance through the Orville H. Copsey Safe Housing Initiative at Indianapolis Legal Aid Society. The program is actually a revival of an effort largely started and run by Copsey, who joined ILAS after he retired as general counsel from CNA Financial Corp. Copsey represented homeowners who had been cited by the Marion County Public Health Department and were in danger of being removed from their homes.

Copsey stepped down at the end of 2016. The program went on hiatus, but the need continued. So, with a $50,000 grant from the Central Indiana Community Foundation, ILAS resurrected the initiative in January with the goal of helping 40 clients this year. Also, in keeping with Copsey’s knack for marshalling resources in the community to provide whatever assistance his clients needed, ILAS is partnering with NeighborLink Indianapolis, which received $40,000 from CICF to do the cleaning, decluttering and minor repairs on the homes.

Laurie Goggins, the ILAS staff attorney who took the lead on reimplementing the program, called the partnership with NeighborLink a “game changer.” Some clients cannot get the trash to the curb, or when they pile their mail and other paperwork on the table and everything falls onto the floor, they cannot physically bend over to pick it all up. Other clients get overwhelmed by the loss of a loved one, while a few clients actually suffer from a true hoarding disorder.

“Once clients understand what the issues are, they want to follow the rules, they want to get onboard and they definitely want to stay in their homes,” Goggins said. “It’s too much for them and they don’t have the family support, and so working with NeighborLink allows us to have a mechanism to get them the help that they need.”

The health department also collaborates with the program, referring troubled homeowners to ILAS. Tim McMillan, co-manager of the housing and neighborhood health division for MCPHD, explained the department has to enforce the code but shares the goal of the Copsey program to make the properties safe and habitable for residents. McMillan said ILAS helps to educate the homeowners, gives them someone to confide in and overall is “an excellent resource.”

Sometimes ILAS staff attorney Richard Dyar will represent Copsey clients who are facing evictions. Landlords are entitled to their properties, Dyar said, but through his work, he has learned every story has two sides, and ILAS clients need their stories told in the same way property owners are able to tell their stories.

Still, the cases in the Copsey program are not resolved quickly. Cases can be continued over many months with regular hearings in the Marion County Environmental Court to review the work that has been done on the home and to determine if the resident is able to take on more tasks or needs to have the work broken into smaller components.

Gartin’s case continued for roughly 11 months. She still gets angry at the memory of the health department officials, animal control and sheriff’s deputies crowding into her small home and telling her what to do with her stuff.

But Gartin’s face brightens as she talks about all that Goggins did for her and how her home is now cleaner and has some new fixtures because of NeighborLink.