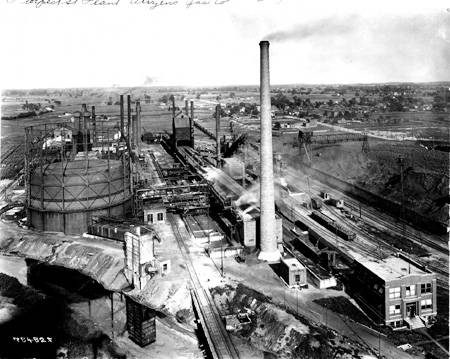 After being home to a gas and coke facility for nearly 100 years, the land designated for the new Marion County Community Justice Center has a toxic legacy buried deep in its soil.

The contaminants include volatile organic compounds, semi-volatile organic compounds, polychlorinated biphenyls (PCBs), ammonia, nitrate and nitrite, according to reports from the Indiana Department of Environmental Management. Many of the toxins present at 2950 E. Prospect St. on the east side of Indianapolis have been detected as much as 12 inches below the ground’s surface and in shallow groundwater and are known, or reasonably expected, to cause cancer.

Although the site is being hailed by Indianapolis leaders as a prime location for the county’s new courthouse and jail, some Marion County judges have questions about the potential health risks the toxins pose to themselves, court staff, attorneys, visitors and, especially, inmates.

“People don’t go there because they want to but because they have to,” said Marion Superior Judge James Osborn. “We have a responsibility to make sure the place is safe.”

The Marion Superior Court commissioned ATC Group Services LLC to review the environmental reports, evaluate the remediation plan for the land and determine the potential risk to human health from exposure to the contaminants. 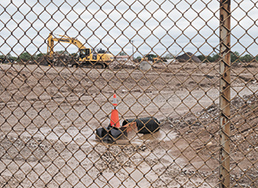 The former Citizens Energy site (above) on the east side of Indianapolis is being remediated for the new Marion County Community Justice Center. (IL Photo/Eric Learned)

Finished in April, the report might be creating tension within the Marion County courts. A Marion Superior Court general term meeting May 20, where an update on the justice facility was to be discussed, was closed to the public, and Andy Mallon, who is Indianapolis Mayor Joe Hogsett’s representative for the project, is asserting the report is an “absolute validation” of all that has been done so far.

A “handful of judges,” Mallon said, “are really looking at it from the perspective of ignorance. They don’t understand what’s been done on the project … nor have they paid attention to all we’ve done on remediation.”

However, Marion Superior Judge Mark Stoner said the report raised more questions about the health concerns that he would like answered. Employees of the courts and county jail, as well as attorneys, will be working long hours on the property. Inmates will be living, bathing, eating, exercising and sleeping there, and members of the public will be visiting to see relatives in jail, serve on juries or conduct court business.

“We just want to make absolutely sure — not hopefully sure — that this is a safe place for everybody,” Stoner said.

From 1908 to 2007, the Prospect Street property was home to Prospect MGP, which produced manufactured gas and other products including metallurgical coke, coal tar, light oil, molten sulfur and ammonium sulfate, according to the Indiana Department of Environmental Management.

The company distributed the manufactured gas to its customers through the Citizens Gas utility and distribution system. In 2005, Citizens enrolled the site in the IDEM Voluntary Remediation Program to investigate and address environmental issues.

In recent years, the city of Indianapolis acquired the 140-acre site and held a groundbreaking in July 2018. The new development will be limited to the portion of the property dubbed Pleasant Run Crossing, which will be the location for the new courthouse, jail and sheriff’s department. Also, the section called Pleasant Run Crossing North will hold the prosecutor’s and public defender’s offices, along with the assessment and intervention center.

ATC reported that an array of people could be at risk, including construction workers, engineers, court employees and inmates. Exposure, according to ATC, could occur through inhaling or ingesting the contaminated soil or groundwater, or by getting the contaminants on their skin.

Steven Wanner, licensed professional geologist and principal at GHD, the environmental firm hired by the city to consult on the justice center project, said the sources and pathways of exposure are being eliminated.

About 211,953 tons of unsuitable soil have been scooped from the surface and replaced with about 300,084 tons of clay, which has created a barrier of 6 feet to 12 feet between the remaining contaminated ground and the justice center, Wanner said. Also, the vapor intrusion will be eliminated by the clay barrier along with a ventilation system designed into the building that will exhaust fumes from the interior through the roof and into the atmosphere.

Finally, municipal water being supplied to the justice center will eliminate the potential for exposure to chemicals in the groundwater.

ATC held the soils management plan could include more protective measures. Namely, the company advised that periodic screenings of the ambient air should test for a wider array of contaminants, and the air in the buildings should be sampled prior to occupancy to evaluate the potential level of hazards.

As for the vapor mitigation system, ATC said the risk of inhaling harmful substances should be eliminated “if the system is properly installed, operated and maintained.” Yet the company noted several questions remain about the ventilation process since the system is still a preliminary design.

Mallon said the county would be ultimately responsible for maintaining the environmental safety of the justice center. The criticism is “disturbing … that the county can’t be trusted to take care of its own facility,” he said. “It’s what we promise and will deliver.”

ATC concluded “an unreasonable risk to human health and the environment does not appear likely” if the plan for remediating the site and vapor mitigation system are installed and operated to IDEM standards.

But Stoner said he is not convinced the involvement of the state’s environmental agency will ensure the best outcome. He pointed to the section of the White River that runs near his home and is being choked by algae. While rivers in other states are pristine, Stoner continued, IDEM is not letting local homeowners take care of the bloom, and the agency is not doing anything itself because it lacks the resources.

Both Stoner and Osborn were concerned about the site being classified as commercial/industrial rather than the more stringent level of residential.

The judges said IDEM has been basing its review on the assumption that inmates stay in the jail no more than two years, but defendants facing the death penalty or life without parole often stay longer because the discovery process and preparation for trial are more arduous. Plus, lower-level offenders are now serving their entire sentencing in the local jail rather than being sent to the Indiana Department of Correction.

On top of this, recidivism is bringing some defendants to jail multiple times. Stoner noted one individual who had served a total of 4.3 years in the jail over a 10-year period. The judges want to know if the longer stays will put the inmates at greater risk.

“This is not about an inconvenience,” Stoner said. “We’re talking about cancer.”

Max Kelln, partner at Faegre Baker Daniels and lead environmental legal counsel for the city on the justice center project, said the commercial/industrial label was a default designation and would not limit remediation.

Wanner agreed. He explained the controls being put into place to eliminate the exposure will make the difference between the commercial and residential standards “meaningless.”

The alternative, Mallon said, is not to redevelop brownfields like the Prospect Street property. Former industrial sites litter the Midwest, and for Indiana to be competitive and revitalize economically stagnant areas, it has to remediate. The process being used for the justice center, Mallon said, is based on both technology and science.

Pointing to the effort to build a new sports arena in the city, Osborn offered a different perspective. “Would you put a soccer stadium there?” he asked about the Prospect Street location. “Would they watch a soccer game if they knew about the environmental situation?”

Marion Superior Presiding Judge Heather Welch compared the courts’ environmental assessment to getting a second opinion after a medical diagnosis. She wants the judges to have all the facts and understand what is being done to remediate the site rather than being “motivated by fears of what could happen.”

The courts have asked the city for more details about the vapor exhaust system as well as the thickness and placement of the cap being placed on the soil. Also, as advised by ATC, the judges want dust sampling to be included in the field screening and the buildings’ ambient air to be tested prior to occupancy.

In addition, the courts have asked ATC to enlist a toxicologist to address some of the judges’ concerns.

“We really want to get all of our questions answered so we feel comfortable,” Welch said. “We want people to be safe.”

Construction is scheduled to be substantially completed by the end of 2021, with the courts and jail relocating in early 2022.•