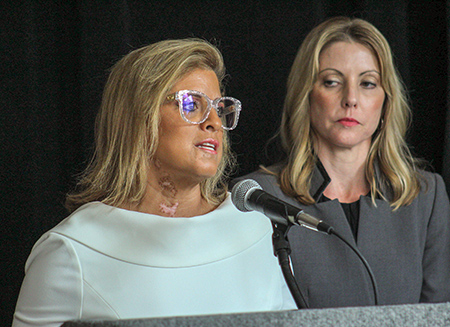 Things have been different at the Indiana Statehouse over the last year for the four women who publicly accused Attorney General Curtis Hill of drunkenly groping them at a party in March 2018.

In court filings and in public comments made Tuesday, Democratic Rep. Mara Candelaria Reardon, her legislative aide Samantha Lozano, Niki DaSilva, a legislative aide for Senate Republicans, and Gabrielle McLemore, communications director for the Senate Democrats, described what they say has become a “retaliatory hostile work environment” for them at the Statehouse. The four women raised the retaliation claim, as well as other sexual harassment-related claims, in an 11-count complaint filed against Hill and the state of Indiana on Tuesday.

Reardon, for example, says she is stared down by Hill’s bodyguard, a state trooper hired to protect the attorney general, any time she is in the same room as Hill. Lozano recalled an incident in which she felt physically threatened by Hill himself, who stood so close to her at a Statehouse event “that their arms could have touched.”

DaSilva also claims to have feared Hill, locking her Statehouse office from the inside every day for more than a month after her identity as an accuser became known. And within the confines of the Legislature, McLemore said she once overheard Democratic Sen. Greg Taylor tell fellow legislators that the allegations brought by the women “were turning into an exposé on the men” who did not act to stop Hill’s alleged misconduct.

These allegations and others make up the 39-page complaint in Niki DaSilva, Samantha Lozano, Gabrielle McLemore and Mara Reardon v. State of Indiana and Curtis T. Hill, Jr. individually and in his capacity as the Indiana Attorney General, 1:19-cv-2453, filed Tuesday in the Indiana Southern District Court. The 11-count complaint brings claims under Title VII of the Civil Rights Act of 1964, constitutional claims for violations of the 14th Amendment and state law claims. Hill and the state are specifically accused in the civil complaint of sexual harassment, retaliation, discrimination, substantive due process violations, battery, sexual battery and false light invasion of privacy.

The women and their lawyers — all attorneys with Katz Korin Cunningham in Indianapolis — announced the lawsuit against the Republican AG during a Tuesday news conference. The women’s lawyers said in October they intended to sue Hill after a special prosecutor declined to pursue criminal charges against him.

Hill is accused of touching Reardon’s back and buttocks, running his hand down DaSilva’s back before placing both of their hands on her buttocks, rubbing his hand up and down McLemore’s back, and pulling Lozano close to him, all without their consent and while at AJ’s Lounge in downtown Indianapolis. Legislators, lobbyists and Statehouse staffers were at AJ’s on March 15, 2018, to celebrate the end of the legislative session, known as sine die.

Hill has repeatedly denied wrongdoing and rebuffed calls to resign from Republican Gov. Eric Holcomb and General Assembly leaders in both parties. His office released a statement late Tuesday afternoon announcing that attorneys within the Office of the Attorney General will represent both the state and Hill, who is being sued individually and in his official capacity, in the action.

“The lawsuit is related to allegations that have now been reviewed four times,” the statement said. “The investigations all concluded without any recommendations for further action.”

The women, however, say the issues presented in their lawsuit are different than those explored by previous reviews of the groping allegations.

Addressing reporters at KKC’s Senate Avenue office Tuesday morning, the four women calmly answered questions and seemed unified in their resolve to pursue a common goal: protecting other Statehouse employees from the harassment they described. McLemore said it was a comfort to endure the scrutiny of the last year alongside the other three women, though she became emotional as she discussed the “comments” that have been directed at them in the months since their accusations became public in July 2018.

For example, the Legislature did not host its annual sine die party at AJ’s at the close of the 2019 General Assembly, and McLemore said the four women were openly blamed for the end of the longstanding tradition. Court documents also say Republican Sen. Jean Leising of Batesville was overheard telling fellow Republican Sen. Sue Glick of LaGrange that the four women “got what they deserved because of how they were dressed at the Sine Die Celebration.”

The complaint additionally says Reardon was removed from the Black Caucus in December 2018, and believes her removal was retaliation for reporting Hill. It also recounts an incident in which Reardon was standing beside House Speaker Brian Bosma and Republican Sen. Blake Doriot, who said, “What are we supposed to do when these women wear a black bra under a white blouse, not look?” Bosma advised Doriot to “never say that again,” and Reardon walked away.

The complaint also accuses Democratic lawmakers of making insensitive comments. For example, House Minority Leader Phil GiaQuinta, in McLemore’s presence, quipped to Senate Minority Leader Tim Lanane on the last day of session, “I know you want to get out of here early so you can make it to AJ’s by 9 tonight, right Tim?” Lanane, according to the complaint, responded, “(O)nly if Curtis is going to be there!”

Further, DaSilva told reporters that people now go around her when trying to schedule meetings with Sen. Ryan Mishler, for whom she works. That makes it more difficult to do her job, she said.

“Since reporting Hill’s unwelcome and unlawful conduct, all the plaintiffs have limited their attendance to work-related social events due to the negative, uncomfortable or inappropriate reactions of lawmakers and staff,” the complaint says. “By not attending such events, the plaintiffs have been unable to make connections, develop relationships, and network within the political community, all of which are necessary to advance their careers.”

The complaint also takes aim at Hill’s response to the groping allegations and his insistence that the women’s stories were “vicious and false.” Part of his response strategy was to use campaign dollars and use his office, social media accounts and campaign website to urge supporters not to believe the accusations.

That response, Reardon said, impugned her integrity, potentially damaging her career. She described the fallout as a “circus” and said the situation has negatively impacted her health and changed the way all four women view the world.

“When an elected official betrays the trust, the public trust, in such an egregious way so as to commit sexual battery and assault and doesn’t have the honor to resign, to maintain the dignity of the office, there have to be consequences for those actions, and there have to be options to hold him accountable,” Reardon said. “And that’s what I believe this lawsuit does.”

The four women seek compensatory and punitive damages, court costs and fees, an apology for Hill’s statements in response to the allegations or a retraction of those statements, and an injunction ordering the state to “adopt appropriate policies related to sexual harassment, retaliation, and protection of individuals’ rights to equal protection and substantive due process under the United States Constitution.”

Both chambers of the Indiana Legislature in 2019 passed new sexual harassment reporting and response policies, but the women and their attorneys say those policies are inadequate.

Those policies apply only to lawmakers, not constitutional officeholders such as Hill, Reardon said. Further, Kaufman Joseph said the reporting policies don’t protect lawmakers or their staffers from harassment, don’t consider an independent investigation, and don’t include an indemnification provision requiring “bad actors” to indemnify the state against harassment claims.

“In sum,” Kaufman Joseph said, “the state of Indiana has simply failed to adequately protect the individuals that work in and around the Statehouse — all of them — as required by federal law.”

If the plaintiffs succeed on their claims for damages, Kaufman said it would be up to the state and Hill to decide how the money should be paid out. There might be frustration over the use of taxpayer money to pay the claims, she said, but that frustration should be directed toward “bad actors” such as Hill, not the four accusers.

Hill also faces an October disciplinary commission hearing on possible sanctions from the state Supreme Court, which could include up to disbarment as an attorney. Kaufman Joseph said the disciplinary complaint and litigation are two separate actions, and the outcome of one will not affect the other. But she also said she expects the four women to be called as witnesses in the disciplinary case.

Hill has proclaimed his innocence. While a special prosecutor declined to file criminal charges against Hill, Indiana Inspector General Lori Torres conducted a parallel investigation that concluded his conduct was “creepy” but not criminal.

Kaufman Joseph said so far, Hill has been unhappy with the various forums used to investigate the March 15, 2018, incident, arguing that he has been deprived of due process rights and has been “unable to tell his story.

“We expect that the defendants will welcome this lawsuit as the opportunity for their conduct to be heard,” she said.
“It is now or never for Attorney General Curtis Hill to tell his story and have his actions reviewed against the standards of law by an independent fact-finder.”

In addition to Kafuman Joseph, the four women are being represented in the litigation by KKC attorneys Kim Jeselskis and B.J. Brinkerhoff.

Generally, attorneys with the Office of the Attorney General represent the state in all court matters, so Jeselskis said this situation in which the leader of the OAG is named a party presents a unique representation question. Hill, however, succinctly explained his office’s representation of him and the state in this action.

“Under Indiana law, the Office of the Attorney General shall defend all suits instituted against the state and its officials,” the OAG’s statement said.