A lawsuit that sought information about the drugs Indiana plans to use in lethal injections and that motivated the Legislature to use a late-night session to keep the veil of secrecy intact has come to a close, with the state paying more than $800,000 in legal fees and disclosing that its supply of lethal injection drugs has long been expired.

The case, Toomey v. Indiana Department of Correction, 49C01-1501-PL-3142, was filed by A. Katherine Toomey, partner at Lewis Baach Kaufmann Middlemiss in Washington, D.C., in January 2015 in Marion Circuit Court. Toomey wanted details about Indiana’s lethal injection drugs, including what drugs were in supply, the inventory logs, purchase orders and receipts for any drugs bought since Jan. 1, 2012, and documents about the manufacturers of the drugs.

In an email, Peter Racher, Toomey’s lawyer and a partner at Plews Shadley Racher & Braun in Indianapolis, confirmed the case is closed and all legal fees, totaling $808,209.41, have been paid. Racher said the state produced documents indicating all of Indiana’s lethal injection drug supplies expired several years ago, and the Department of Correction has not purchased any new drugs for lethal injections since.

The Indiana Attorney General’s Office issued a statement saying it “intends to file a joint notice of satisfaction of judgment and request the matter be closed. At this time, we do not intend to pursue any further litigation in this case.”

Toomey did not respond to messages seeking comment on the case’s closure. But after the Indiana Supreme Court ruled in her favor in February, she told The Indiana Lawyer that she did not expect the open records request she filed in 2014 to turn into a seven-year battle.

“Transparency is a key principle of good governance and the rule of law,” Toomey wrote in an email to IL after the Supreme Court ruling. “The state should not be operating in secret and refusing to disclose vital information to the public.”

In court, Toomey prevailed at the trial and appellate levels.

The first victory came when Marion Circuit Judge Sheryl Lynch granted Toomey’s motion for summary judgment in October 2016. Under that ruling, DOC was ordered to provide all public records the plaintiff had requested.

However, according to subsequent court filings, a plan was brewing to block the release of the information. That plan came to fruition at 2 a.m. on the last day of the 2017 legislative session, when Indiana Code § 35-38-6-1 was amended as part of the biennial budget bill. Under the new language, the information Toomey was seeking was designated as confidential and not for public consumption. 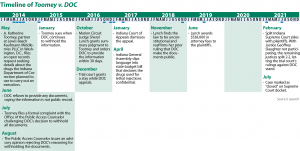 Lynch blasted the maneuver in a November 2018 order denying DOC’s motion to modify the summary judgment order: “… (T)he General Assembly unconstitutionally took away judicial power. The General Assembly does not have the authority to determine the outcome of pending litigation,” Lynch wrote. “As applied to this case, the General Assembly’s passage of the Statute overstepped its authority and violated the Indiana Constitution’s Separation of Powers by disturbing a pending case and upsetting this Court’s judgment.”

Once the dispute arrived at the Indiana Supreme Court, the case took another twist.

Justice Geoffrey Slaughter did not participate in the decision and the remaining justices were evenly split, with Chief Justice Loretta Rush and Justice Christopher Goff voting to affirm the Marion Circuit Court and Justices Steven David and Mark Massa voting to reverse. In a single-page order issued Feb. 25, the Supreme Court followed the procedure prescribed by Appellate Rule 59(B) and affirmed the trial court judgment.

The case attracted the attention of the news media, with several Indiana newspapers joining amici briefs. The amici primarily argued against the Legislature’s amendment, which had been dubbed the “secrecy statute,” and supported Toomey’s quest for making the lethal drug information public.

Included in the brief submitted by the Reporters Committee for Freedom of the Press, the Society of Professional Journalists and 15 media organizations was a review of the tradition of the Hoosier news media providing Indiana citizens with detailed accounts of executions. Those press reports regularly identified the individuals who carried out executions and provided gruesome descriptions of the hangings or electrocutions.

“Indeed, access to the identity of the companies that manufacture and provide execution drugs is critical to assessing how the State carries out an execution,” the brief stated. “This information allows the news media and the public to evaluate the pharmacy’s reputation by investigating its volume of drug sales, consumer complaints, citations issued by the federal or state government, drug recalls, and litigation involving the pharmacy’s products, practices, or conduct.

“Given the central role such drugs play in the execution process, the compounding pharmacies that provide them warrant public scrutiny,” the brief continued. “And, as a number of botched executions involving concealed information about the sources of the drugs used show, this process requires accountability.”•