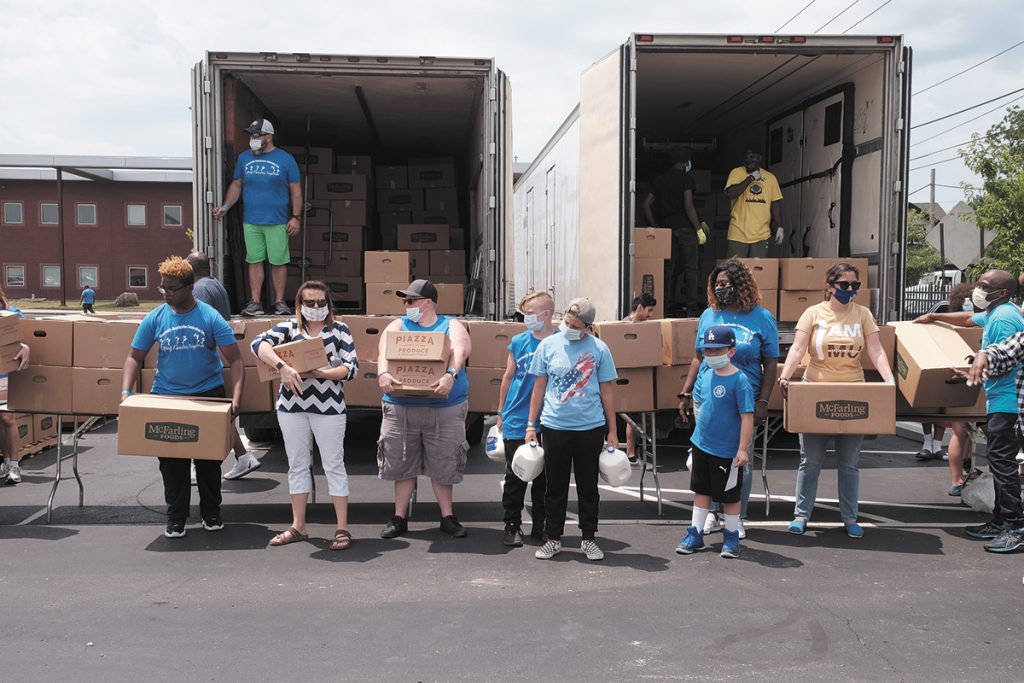 In conjunction with the first celebration of National Reunification Month in Indiana, volunteers distributed 1,008 boxes of food and fresh produce during a June 26 event at Martin University. (IL Photos/Eric Learned)

Marion Superior Juvenile Magistrate Judge Diana Burleson admits she has no answer for why some very troubled parents fight so hard to keep their children.

They may be failing to provide a stable home, but still they will plead with the courts not to take their kids. Decisions from appeals upholding the termination of parental rights often detail painful stories of ongoing drug use, missed visitation appointments, incarceration and an inability to take care of their youngsters’ most basic needs.

Burleson cannot offer an explanation, but from her work presiding over Family Recovery Court, she is often reminded that people are capable of change. Sometimes when a new participant starts in recovery court — which is specifically geared toward parents who have an open child in need of services (CHINS) case and a substance abuse disorder — the judge will doubt that individual will successfully complete the program.

“So many times, I’ve been wrong,” Burleson said.

Although many may be skeptical of parents whose children are removed from their care, statistics show that nearly 67% of Hoosier youths exit foster care and are successfully reunited with their moms and dads. Those stories of resilience inspired the Marion Superior Court Juvenile Division and the Marion County Public Defender Agency to celebrate National Reunification Month for the first time in Indiana.

In June, Indiana joined 29 other states in recognizing reunified families. The Marion County team secured an $8,000 grant from the Court Improvement Program to fund a community event and a seminar with national experts sharing best practices for helping families achieve reunification.

Marion County Public Defender Agency assistant division chief Andrea Marsh said the celebration was meant to reaffirm the value of households staying together. Reunification is the goal when families enter the child welfare system, she said, because that is the best outcome, particularly for the children.

However, plans for a community empowerment fair complete with games and food were scuttled by the COVID-19 outbreak. Organizers had wanted the event to happen in early June to kick off Reunification Month, but as stay-at-home orders were enacted, they considered delaying the festivities until September before concluding they likely would have to cancel everything until next year.

Then LaShauna Triplett, school director and lead female mentor at the Mackida Loveal & Trip Outreach Center in Indianapolis, extended an invitation. The center had been distributing food to families during the pandemic, and since some of the households being helped had been through the CHINS process, she proposed the reunification event join the relief efforts.

On June 26, volunteers from the public defender agency, the courts, Indiana Department of Child Services and many other stakeholders joined MLT Outreach for a revamped celebration in the parking lot at Martin University. Families were able stay in their cars and drive through to receive a 10-pound box of fresh produce, a 50-pound box of food, a gallon of milk and an essentials bag stuffed with items such as soap, toothbrushes, toothpaste and toilet paper.

Car seats, bicycle helmets, coloring books and crayons also were available. Families started arriving hours before the distribution was scheduled to begin, and at least one of the individuals coming for food volunteered to direct the traffic.

“It was amazing,” DCS director Terry Stigdon said. “… I think the neatest thing about it was the feeling of joy of the people that were there. They were so excited to be able to be part of this event.”

The 1,008 families who were served highlighted the role poverty can play in households that encounter the child welfare system. Organizers were quick to emphasize that, by itself, being poor is not a reason to open a CHINS case, but financial struggles are intertwined.

Parents want to provide for their families, but when they cannot, neglect can result. Organizers said children might go hungry because there is no money for food, or they may be left alone because the parents cannot afford day care when they go to work.

To help families weather hardships so they do not become involved with DCS, the celebration also provided connections to community resources. Many nonprofits passed out information about the services they offer. Such support, organizers said, is vital not only to prevent children from being removed from their homes but also to enable reunified families to stay together.

Parents at the celebration who identified themselves as having been reunited with their children were given some special recognition. Judicial members of the juvenile court were on hand to present certificates of achievement and balloons to reunited families.

Pamela Suchecki, mediator for the Marion Superior Court Juvenile Division, said the courts, DCS and public defenders know parents work very hard to get their children returned. The event allowed the judges, attorneys and staff to applaud the families for their success at overcoming significant obstacles.

“I think it’s very scary,” Suchecki said of encountering the child welfare system. “While not every family that goes through (a CHINS case) loved the process, I think a lot of families recognize there is a benefit to it.”

Jamie Trawick acknowledged she enrolled in Family Recovery Court mainly because she wanted to “look good” for the juvenile court and DCS so she could get her then-2-year-old daughter back.

After her mother gained temporary guardianship over her daughter, she wanted to do what was necessary to prove to the court she could stay sober and take care of her little girl. She was initially uncertain but she did the work required and began to feel good about herself. The structure, the accountability and the goals she achieved helped her to grow and take pride in who she is.

Burleson focuses the FRC on supporting the participants. The court is voluntary and enrollment is not required as part of a CHINS case. Still, the program becomes personal for the participants when they realize the court wants to help them overcome their own trauma so they can care for their children.

The court is full-service with participants visited weekly by the case managers and getting connected to resources. Also, as they meet their benchmarks, they are awarded play money that they can then spend in the court’s mini-retail store that is stocked with things such as diapers, baby wipes and home decor items.

Trawick said she embraced the help the court offered and felt that Burleson and her staff genuinely cared. When she relapsed, she was ashamed but learned, rather than punish, the FRC works with the individual on figuring out how to move around the road blocks.

Parents joining the FRC bond into a kind of support group. Burleson particularly enjoys seeing the participants getting into what she calls their groove, where they stop blaming everyone else and begin addressing the barriers in their lives.

“We want to see them get their life back so we don’t have to worry about the kids anymore,” Burleson said.

Trawick is a success story, graduating from the recovery court and reuniting with her daughter. Along the way, she excelled at her job, moving into management before taking a new position in a different industry. She married and became a mother again. Meanwhile, her daughter is in middle school and enrolled in academically advanced classes.

While confidentiality rules keep the happy reunifications from being publicized, some foster parents have been vocal about their concerns with returning children to their natural families. Marsh believes the insinuation is that DCS is giving biological parents too many chances and their children are better being placed in foster or adoptive homes. But, she emphasized, adoption is a last resort because the separation is painful and traumatic for the children.

Triplett understands the frustration felt by foster and adoptive parents.

She was in her early 20s when she started the process to adopt her son. The boy’s biological mother had attended only one hearing, but still the judge kept following court procedure and ended up holding a full trial without her.

Years passed before the court finalized Triplett’s adoption, and while initially she did not understand why so much time was needed, she has since come to appreciate the process. She can now see the situation from the biological mother’s perspective and realizes the court provides natural parents the opportunity to exhaust all means to reunify with their children.

Stigdon described the job of foster parents as keeping the children safe while the parents do what is needed for reunification. She applauded those foster families who remain in contact and continue to provide support for the reunified families.

And those family times may be why troubled biological parents fight. Lara Schilling, coordinator for the Family Recovery Court, surmised that moms and dads are trying to let their children know they are loved.

“They want to be able to say to themselves and their kids they did everything they could,” Schilling said.•