Home » From a bicycle to a jet: New Marion County Justice Center to put technology first 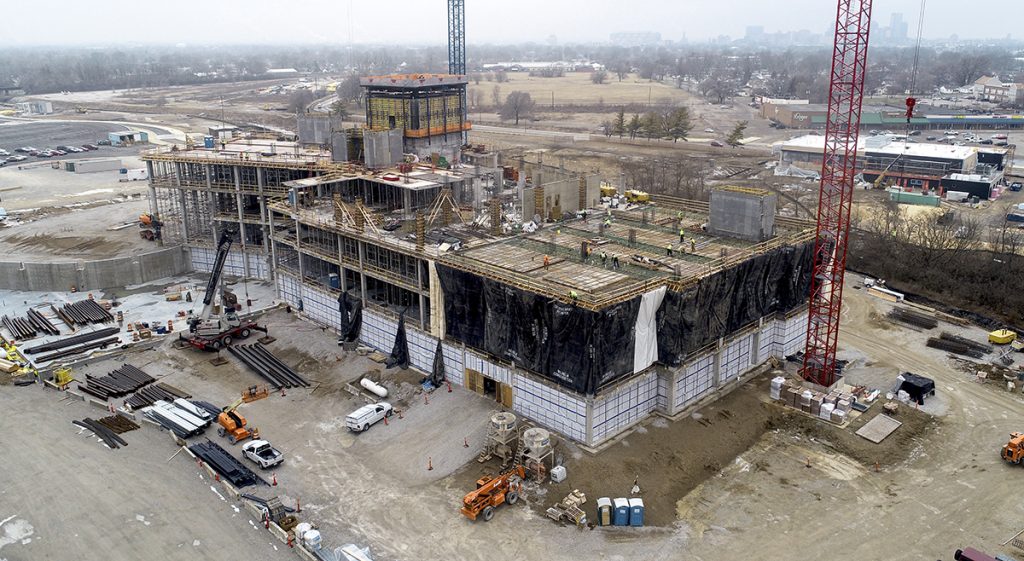 As construction continues, the Marion County Community Justice Center will be outfitted with state-of-the-art technology. (Photo courtesy of Shiel Sexton)

Business litigator Wayne Turner remembers the days when he would call upon jurors to use the skills they likely learned in kindergarten.

At the start of a trial, the people empaneled in the jury box would be given a notebook. Then, as the exhibits were admitted by the court, each juror would be provided a paper handout of the exhibit and would have to stick it behind the appropriate tab in their notebooks.

The process was not always smooth. Turner recalled that attorneys would continue moving forward with new material, but the jurors would be reading through the paper copy they had just received and filed.

These days, the partner at Hoover Hull Turner trades those old-school ways for technology. A laptop plugged into a large screen can be used to not only display the exhibit, but also to highlight the passage, picture or chart to which he wants to call attention. He keeps the jury attuned to his presentation.

“It lets you do things to communicate complicated explanations and opinions in a simpler way,” he said.

Turner is not an outlier. Attorneys increasingly rely on their computers, mobile devices and a plethora of software to work in and out of the courtroom. But for those who have had a hearing or trial in the Indianapolis City-County Building, they have often had to bring their own equipment. Lawyers have lugged in the hardware, used their own applications and programs to present their material, then packed and lugged everything back to the office.

However, the situation will be dramatically different at Marion County’s new Community Justice Center. The courthouse being constructed on a campus southeast of downtown is having tech built into its bones with the installation of state-of-the-art Category 6A ethernet cable and numerous devices to facilitate cutting-edge telecommunications. When finished, the facility is expected to gain national attention as other courts will want to see what was done and how.

Marion Superior Judge James Osborn compared the technological transition from the current building to the new justice center as going from a bicycle to a jet.

“People are advanced beyond the technology currently utilized in our courts, and we’re trying to catch up with them instead of them catching up with us,” said Osborn, chair of the justice center’s information technology subcommittee.

Tech on a budget 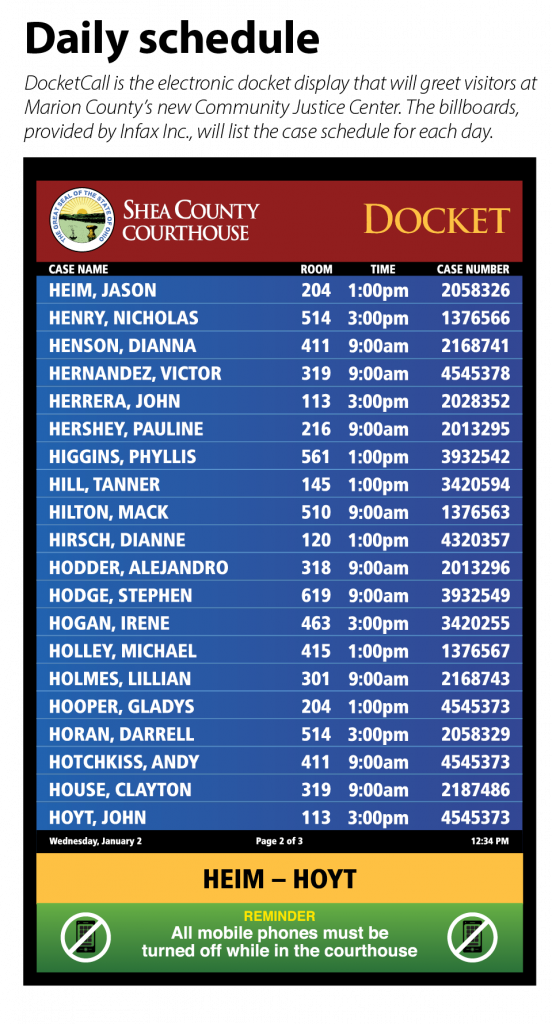 The technology going into the new justice center is being tested, evaluated and, in the case of the apps, built under the leadership of Marion Superior Court chief technology officer Amitav Thamba. Around the corner from his office in the court administration suite is a laboratory of sorts filled with four large flat screens that Thamba and his team are using to try out different software and gadgets.

Ease of use is the key goal. Lawyers will be able to bring their own computers into the courtrooms and readily connect and use the court’s system without struggling to figure out how to scan, display, highlight and whatever else they want to do.

“Simple things that people, once they move and start using it, they will think, ‘How come we didn’t have this before and why didn’t we do this before?’” Thamba said. “What Judge (Osborn) and I are trying to do is making it so easy that you won’t have to think about it.”

The courtrooms will be equipped with 90-inch flat panel displays, video cameras, microphones, monitors for the judges, attorneys and witnesses, and evidence presentation devices with wireless sharing and a document camera.

Attorneys wanting to show a piece of evidence to the jury will place it under the document camera, and it will appear on the large screen. Then the simple flick of the forefinger and thumb, as often done to a photo on a smartphone, will enlarge the image.

Witnesses on the stand will be able to annotate the images that appear on their monitor. They will be able, for example, to draw on any diagrams of car accidents where they were and the direction the vehicles were traveling. Their markings will be shown on the large screen to the jury and stored with the court exhibits.

From the bench, the judge will be able to review the exhibits on a personal monitor and then, if admitted, push a button and have the material displayed for to the jury to see. If the attorneys approach for a sidebar, the judge can hit another button to fill the courtroom with white noise to mask the conversation.

When the jurors begin deliberating, they will be given the list of exhibits, each with a UPC code. If they want to see a particular document or photo again, they will just scan the code and the image will appear on the jury room screen.

In addition to simplicity, the team has been mindful of costs. Osborn and Thamba estimated the price of all technology will comprise about 1% of the justice center’s entire budget. The technology team has been “absolutely frugal,” not buying just to buy, trying to build what they can in-house and extensively testing to ensure the equipment or processes under consideration will work.

“I think (the justice center) will end up being something people will come to see how we do and maybe try to copy it,” Osborn said. “But we’re a government entity; we’re not going to buy the best thing we can ever get all the time. We’re not going to buy stuff we don’t know we’re going to use. Everything is looked at with a practiced eye.”

Osborn had a front row seat to two veteran trial attorneys who incorporated technology into their presentations when Turner and Gregory Neibarger opposed each other in March 2019. The two lawyers reached an agreement before the trial began to split the costs of providing monitors and a 7-foot projection screen for the courtroom.

They were not bringing in the new stuff just to dazzle the jury. Turner and Neibarger are careful about the equipment and software they use in the courtroom, making sure both will fit their needs before they begin their opening arguments.

“Don’t put up a shiny object for the sake of having a shiny object,” Turner said. “My objective (for the technology) is creating a memorable moment for juries.”

While Turner will put another attorney in the “hot seat” to run the computers and programs during trial, Neibarger, partner at Dentons Bingham Greenebaum, embraces electronics and their capabilities. He and his teams rely on an array of technology as they move through a trial.

Microsoft OneNote is an indispensable component of Neibarger’s trial prep, brought in when a case arrives and kept in continued use until the verdict or settlement. The team members enter their notes, analysis, research, depositions and everything else into that program, which then becomes a searchable document and a key resource.

PowerPoint presentations are used to underscore main points during opening and closing arguments, and TrialDirector 360 is employed to project documents and transcripts on a large screen for the jury to see.

In addition, Neibarger will take his iPad to the podium as a way to keep his notes handy when he examines a witness. Also, his Apple Watch will vibrate to let him know co-counsel has sent him a “mission critical” message. Moreover, he does not draw attention to the gizmos. Rather, he only glances at the tablet on the podium and slyly slides his wrist up to the lectern to take a quick look at the note.

“I believe jurors put a lot of stock in perceptions,” Neibarger said, adding jurors draw conclusions based on how prepared lawyers are and how knowledgeable they are of the facts. “How efficient, streamlined and organized you are goes to your and your client’s credibility.”

Neibarger praised Osborn for allowing him and Turner to outfit the courtroom. The judge and his staff gave access and provided support so the attorneys could test the equipment before trial. It was much better than the heavy projector and cumbersome roll-up screen he has had to carry into the courthouse for his cases.

Hauling the 1980s-era machines around downtown Indianapolis, Neibarger said, “is no fun.”

Aside from the attorneys, the experience of going to the City-County Building has not always been good for the jurors, clients or the general public. Some get stuck waiting in the hall where, because there are no chairs or benches, they have either had to stand or sit on the floor. A private conversation with their attorney might have to be done in the hallway or quietly in the back of the courtroom, and the search for a spare outlet to charge their phone can be a lengthy undertaking.

When Morgan Decker, associate at Rubin & Levin, sat down with Osborn as part of an informal group to chat about the new justice center, she focused on the nonlawyers.

“There’s just so many people that look lost in the county courthouse on a daily basis,” Decker said.

Some, she said, do not even bother showing up because the headache of finding parking downtown, getting through security, then finding the right courtroom while bringing all the papers they need is too overwhelming. Pointing to the kiosks at McDonald’s that take customers’ orders and the Indiana Bureau of Motor Vehicles’ website that tells drivers what documents they will need to renew their licenses, Decker sees technology as a way to make the courts more efficient and easier for the public.

“If everything is just a little bit easier, whether it’s getting a license or checking in with the court staff just to tell them you’re there, it’ll be better all around,” she said.

The justice center is being designed with the public in mind. Upon entering, docket screens, much like the arrival and departure boards at the airport, will have the cases being heard that day along with the time and location. Every floor will have 145 seats outside of the courtrooms for people to sit, conference rooms will be available, charging stations for phones will be throughout, and drinking fountains will have the capacity to fill a water bottle.

Osborn believes the higher level of comfort will lower the stress for many people.

“Parties will not be as frustrated as they often are when they come before a judge now, especially in a major high-volume court,” he said. “The more we can alleviate the smaller issues that aren’t that important and get focused on the legal issue, I think, the process will be better and less stressful.”•