Home » ‘It all starts with the family’ 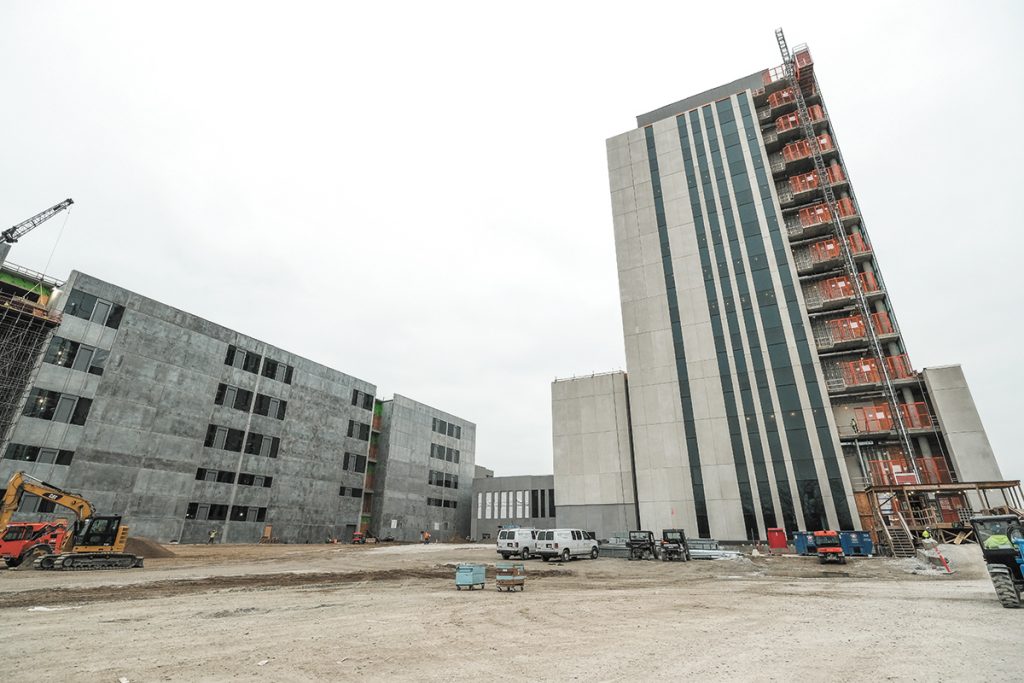 The new courthouse being built at the Indianapolis-Marion County Community Justice Campus is enabling the creation of a new family division and a one family, one judge model in the courts. (IL Photo/Eric Learned)

As the work continues on their new courthouse, Marion County judicial leaders are planning for more than fresh paint, new furniture and upgraded technology.

They are making a fundamental change by realigning the court divisions to place more emphasis on families. The new alignment will eliminate the juvenile and probate divisions and shift all family law matters into a new family division. There, a team of judges, magistrate judges and court staff will be dedicated to handling only cases involving families with the goal of getting the issues resolved as quickly as possible and reducing the need for parents and children to return to court.

Although the transition to the new family division will start in January, nearly a full year before the new court building on the Community Justice Campus is completed, the construction is making the realignment possible. Namely, for the first time in memory, all the judges and courts presiding over civil matters like divorces, probate issues like adoptions and juvenile concerns like termination of parental rights will be at the same address.

“We wouldn’t have had the ability to do this without the Community Justice center,” said Marion Superior Judge Alicia Gooden. “There’s no way it could happen if we were in separate buildings.”

Along with creating the family division, the courts will also be taking a new approach by using the one family, one judge model. The same judge will handle all the issues involving one family whether that encompasses one case or multiple cases.

Gooden said the approach will bring more uniformity to the current system, which can be fragmented.

For example, divorces in Marion County might appear in one of 12 civil courts in the downtown City-County Building. If the Indiana Department of Child Services becomes involved and a child in need of services case is opened, the family will start appearing in the juvenile courts, which are located at 25th Street and Keystone Avenue. Once the CHINS issue is resolved, then the family gets sent back to the civil court to complete the divorce proceeding.

Marion County’s adoption of the one family, one judge model came at the recommendation of the National Center for State Courts. After an evaluation of Marion County courts, NCSC drafted a report and series of recommendations in January 2020 designed to help the local judges create a family-centered court based on research and best practices.

Other jurisdictions around the country have implemented the one family, one judge method, but Marion County will be the first large court system in Indiana to use this model.

Lindsay Scott, president and CEO of Kids’ Voice of Indiana, expects the new family division will have a “very positive impact” on children and their families. It will be able to provide better access to justice, particularly for unrepresented litigants. And with everything being in one location, getting through the court system will be simpler.

“I hope families see this as Marion County saying, ‘Families are important,’” Scott said. “The courts are saying, ‘Families need our help so we’re going to figure how to fix (the justice system) to make it better for them.’”

RELATED STORY
Click here for an update on the Community Justice Campus.

All in one location

Many times, Jonathan Stewart, senior attorney at Indianapolis Legal Aid Society, has had to sit on the floor of the hallway outside a Marion County courtroom and handwrite an agreement between family members or former spouses.

Stewart handles family law cases and has seen feuding parties suddenly decide to compromise when their case is moments away from being heard by a judge. The opposing sides may have been determined to fight in court, but standing in the City-County Building waiting for their hearing, they will often change their minds and agree to work out a settlement.

“That’s when it gets real,” Stewart said of the shift in attitude that comes outside the courtroom doors.

However, the adults do not have access to any private rooms in the county courthouse. They have to negotiate in the hallway and Stewart has to write the terms on a piece of paper using his lap as a desk.

The new courthouse at the Community Justice Center Campus in the Twin Aire neighborhood southeast of downtown Indianapolis will solve that problem.

Within the 12-story building, floors one through three will be home to the family division. Chambers for the judges and judicial officers, court staff offices and the courtrooms will be located there, along with private conference and mediation rooms and comfortable waiting areas with places to sit. Even design details such as the colors and fabrics have been given careful consideration in order to make the space look different from the rest of the building.

The new space, Gooden said, will bring more of a sense of peace and is more pleasant.

“You’re not going to have a situation where you’ve got folks standing up in the hallway, cramped, uncomfortable,” she said. “It’s not going to be like that at all.”

Stewart noted the court system in Marion County has many twists and turns that can be confusing and frustrating for families trying to navigate their way through it. The new family division will have the ability to streamline the process, but more importantly, he said, it will have the flexibility to ensure the best interests of the children are at the center of every decision.

All family cases are different, Stewart said, and courts must have the capacity to adjust. Attorneys from other practice areas are sometimes surprised by what they encounter in court when they take a family case pro bono. But the subject of many of these cases are children, and what is best for them might not be determined by an arbitrary deadline or by what is fair to each parent.

The Department of Child Services is also supportive of the new family division.

“DCS works in conjunction with the courts to support Hoosier families and children as they navigate some of life’s biggest challenges,” said DCS spokeswoman Noelle Russell. “The agency looks forward to working within the family court model at the Marion Superior Court Family Division.”

As Marion County courts roll out the one family, one judge initiative and develop other innovative programming for families, the family division will be collecting data and adhering to “very stringent evaluation” methods, according to Gooden. If something is shown to not be working, changes will be made.

Also, the family division is planning to provide regular training for the judges, the bailiffs and the court staff. The focus of the instructional programming will range from new developments in caselaw and state statutes to better understanding the trauma that people coming to court can experience.

Families have been going through a lot of trauma over the last decade brought on by the Great Recession and the opioid epidemic, Scott said. Now, Hoosier households are being squeezed by the COVID-19 pandemic in multiple ways that will likely have many long-term effects.

She believes the family division could interrupt or even stop the trauma from continuing.

“From my perspective, I think this is all based on the children’s needs,” Scott said. “If parents have less trauma and can access the justice system, that will be better for the children.”

The family division team is committed to making the new model work, Gooden said. The judges have a passion for the families and a passion to help them because they know the impact can ripple well beyond a single household.

“I have had this impression from outsiders … that family law is seen as less important, less prestigious … but really it all starts with the family,” Gooden said. “If you don’t fix that, you will not fix all the other problems that we have in our community.”•